The July 1962 edition of society magazine Queen featured, in its gossip column, an article under the following heading:

The title signified a novel approach to the problem that many investigative-journalists face; how to break a story that is certainly true but relies on sources that can never be named? One sentence featured in the article was cleverly contrived to leak the information that burgeoned into the Profumo affair, and almost brought down a government. This is the sentence:

Those ‘in the know’ were able to piece together this riddle fairly easily – and, having done so, were quick to propagate, as rumour, the information implicit within it. The consequences rocked the nation.

This is how it works:

The writer is careful not to connect the Russian diplomat (i.e. ‘the spy’) directly with the British Cabinet Minister.

But the context provides more than a hint of two clandestine liaisons pursued by the female subject of the sentence, who receives male visitors of considerable socio-political significance in swift succession, and is herself known by, and of sustained interest to, the security services.

She may very well be a “high-class call-girl”.

She may even be Christine KEELER who, through Stephen WARD, was intimately connected to John PROFUMO and Yevgeny IVANOV – the British Minister of War and the Russian spy – and all this against the backdrop of the Cuban Missile Crisis, the closest this world has ever been to all-out nuclear world war. Yet nothing in the article rendered it vulnerable to libel action.

No names were named; no improprieties exposed.

But the writer had successfully communicated information regarded as ‘Top Secret’, without falling foul of the libel laws or the Police.

That one sentence ignited one of the most far-reaching political scandals of the twentieth century.

Reviewing some documents from the National Archives recently, I had occasion to remember the “Sentences I’d Like To Hear The End Of” ploy (hereinafter, the “Sentences Game”, for short). It set me wondering if there might be ways to adapt it to the twenty-first century without losing any of the original appeal.

I at once thought of the way in which Freedom of Information Officers strive in their responses to invoke exemption clauses – most commonly the right to redact the very details that the FOIA request was framed to elicit in the first place. Let us call this the “Redaction Game”.

I prefer the latter, and I will tell you why:

The first hides; the second reveals.

The first serves the private; the second, the public interest.

The first is opaque; the second, transparent.

The first evades accountability; the second demands it.

But it turns out that there is more than one way to play the “Redaction Game” . . . in the right hands, it can be played in reverse, so that, in fact, it achieves all the same objectives as the “Sentences Game”.

Here are a few examples:

Readers may wish to contribute their own attempts at playing the “Redaction Game” by emailing them to:

where we look forward to publishing occasional compilations of the best of readers’ efforts – in the public interest, of course.

It is worth noting that Sir William HALEY – editor of the The Times newspaper during the Profumo crisis – had this to say:

“There really are people who believe that the encroachments of authority, the corruption of society, and maladministration can safely be left to the powers-that-be to put right. The truth is that in a quiet way very much is going seriously wrong. Journalists have in their hands an instrument which, when courageously and responsibly used has so far proved in free societies to be the most effective in informing, in promoting discussion, in exposing error and malpractice, and preserving liberties.”

And that was more than half a century ago . . . 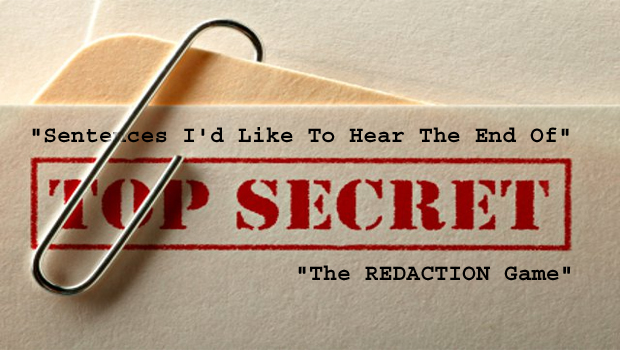