As local readers of Real Whitby are surely aware, there have been a number of highly contentious changes to the ways in which on-street parking is to be regulated in Whitby, starting – at least according to the Whitby Gazette (that venerable font of knowledge) – in certain areas, as of this month.

My most recent information from NYCC reads:

“It is currently strongly anticipated that the scheme will begin operation on the 18th April; the only delay to achieving this date would be associated with any element of the lining and signing being incomplete, (which may occur, for example, due to the weather condition) in which case the new restrictions clearly couldn’t be enforced.

Enforcement in the location will continue as it does at present, albeit the additional parking restrictions, including the parking bays (which will be operational between the hours of 9:00am and 7:00pm), will be included in the enforcement from the start date, which will be advertised accordingly before commencement.

Questions regarding the applicable charges for any non-compliance with the restrictions may be aimed at Scarborough Borough Council, for the appropriate response to be issued, as it will be responsible for enforcement of the scheme, as agents to the County Council.”

Many residents feel (quite rightly) that the fundamental tenet of the consultation process has not been met: that the regulations must first and foremost offer priority to Whitby residents.

A legal preference or precedence. When two persons have similar rights in respect of the same subject-matter, but one is entitled to exercise his right to the exclusion of the other, he is said to have priority.

The “other”, in the present context, refers to the motorist who is not resident in the town, and who in no way stands second in the queue to residents. He will compete for his parking space on a par with residents.

The new regulations do not conform to the most fundamental tenet of the proposal – and there the matter should rest. But NYCC takes a different view. The government grant is available for the project – and for this project only. Much of it will be ‘absorbed’ within NYCC itself.

Perhaps, opinion-wise, he was taking both on board simultaneously; after all, that was the approach he took to his Broadband/IT Allowances from both SBC and NYCC – for which we still await the “frank and honest statement” that he promised to readers of the Whitby Gazette, back on 26th October 2012.

Before cutting to the bottom line on the on-street parking issue, some readers may wish to examine the legal arguments surrounding the new regulations – though it does make for some rather dry reading, so I would encourage those readers who wish to cut straight to the bottom line to skip this section entirely and go directly to the next sub-heading – ‘A Flaw in The Law’ – or even to the concluding section – ‘The Bottom Line’.

The new on-street parking regime is to be administered for NYCC by SBC (draft regs here), who provide the following information on the SBC website.

I quote here the information specific to Whitby (and Filey):

Filey and Whitby Town Centres provide time restricted on street parking bays. These bays vary in parking time, although many are 40 minute bays.

A driver can park in these bays for the amount of time permitted on the sign. The driver must then move the vehicle away from the area for the permitted time stated by the sign before returning.

There is no need to display a clock in these bays as a Civil Enforcement Officer will observe the vehicle on two separate occasions, to determine whether the vehicle has been parked for longer than the permitted time, before issuing a Penalty Charge Notice.

Please be aware that there are also other restrictions within the town centre area, which are in force outside of the permitted time stated for the marked bays e.g. double yellow lines, disabled bays, loading bays etc. It is the motorist’s responsibility to ensure they have adhered to the regulations that are in place when they park their vehicle.

It is helpful also to consider the SBC information relating to Penalty Charge Notices (PCNs):

Following the introduction of Part 6 of the Traffic Management Act 2004, Scarborough Borough Council is changing the way it enforces parking regulations. This came into effect on 31st March 2008.

The majority of motorists park correctly, however a vehicle parked incorrectly can not only be dangerous to other road users and pedestrians, but it can cause queues, delays and inconvenience for other road users.

A Penalty Charge Notice is issued to a vehicle when the driver has parked somewhere they should not be, or if they have broken the parking restrictions relating to where the vehicle is parked.

The cost of the PCN will differ depending on the severity of the contravention.

1. an amount that has to be paid or spent to buy or obtain something.

NB: will “incur a cost” – i.e. incur a liability, pursuant to a duty to pay an amount or charge.

A closer look at Section 6, 72(2) of the Traffic Management Act 2004, upon which SBC bases its perceived authorisation, reveals a very interesting point of law:

(2) The regulations shall include provision specifying the person or persons by whom a penalty charge in respect of a contravention is to be paid (who may be the owner of the vehicle involved in the contravention, its driver at the time of the contravention or any other appropriate person).

A Penalty Charge Notice (PCN) is not a fine. (A fine is a sum of money required to be paid as a penalty for an offence. In most cases, an offender can only be subject to a fine upon conviction of an offence, in a court of law. Councils are not courts of law).

A “charge” is defined in law thus:

duty, responsibility, or obligation; a price asked for goods or services.

Interestingly, this seems to indicate that motorists are not to be charged for parking – rather, as payment for the provision of a ticket.

A “duty” is defined in law as:

1) a legal obligation, the breach of which can result in liability. In a lawsuit a plaintiff must claim and prove that there was a duty by defendant to plaintiff. This can be a duty of care in a negligence case or a duty to perform in a contract case.

And a “liability” is defined in law as:

Regarding 72(2) of Section 6 of the Traffic Management Act 2004 (mentioned above), readers who have not already lost the will to live may wish to consider the phrase “other appropriate person”.

Well, before examining the adjective “appropriate”, we must bear in mind that the noun “person” has a very specific meaning in law.

To be clear, a Council – which is a body corporate – is a “person”. This is a formal legal term for a “corporation”, which is defined thus:

So it is true that a corporation may be fined upon conviction of an offence. As can an individual human being. Upon conviction.

However, a body corporate is clearly not to be confused with an individual living human being. It cannot, for example, contract AIDS or die from pancreatic cancer. Incidentally, note how the “rights” and “privileges” are off-set by the “liabilities” – the “liabilities”  are the “duties” of the body corporate. Everything has its price.

On the other hand, the Council most definitely is a “person”; its “personhood” is fundamental to its defining condition and may not, under any circumstance, be waived.

Equally clearly, a Council must surely qualify not only as a “person”, but as an “appropriate person”, as referred to in Section 6, s.72 of the Traffic Management Act 1978, cited above, because a Council is a corporation – a body corporate – in this case specifically and statutorily called upon to administer the regulations in question. It is clearly an “appropriate person”, since it exists precisely for the purpose of conducting such matters as traffic management – though it is not authorised to treat traffic management as a potential revenue stream.

Indeed, s.76 of the same Traffic Management Act 1978 clearly references this distinction between a “person” and an “individual” (a living human being), in particular in its treatment of Civil Enforcement Officers (CEOs – or “traffic wardens”, as they tend to be commonly known):

(2) A civil enforcement officer must be—

(b) where the authority have made arrangements with any person for the purposes of this section, an individual employed by that person to act as a civil enforcement officer.

I hope that this important legal distinction between a “person” and an “individual living human being” is now fully clear to the reader. (And to Councillor Mike COCKERILL – if not Mike – who recently demonstrated his inability to make the distinction at Filey Town Council recently).

The Flaw in the Law 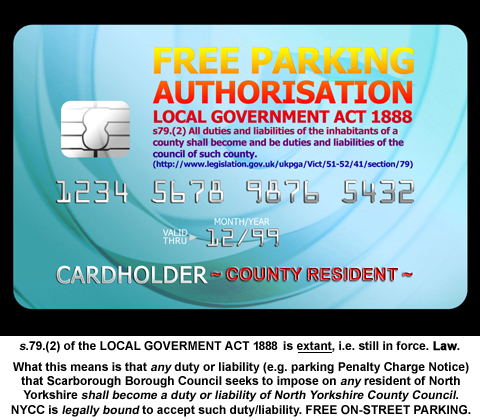 Let us now consider the implications of the Local Government Act 1888 – s.79.(2) of which remains extant (i.e. it is still on the Statute books, has never been amended or repealed, and is therefore still actively in force, to this day), which reads:

Now, an “inhabitant”, as we all know, is an individual human being (or animal, or any other animate entity) that lives in or occupies a specific place. But a “council” is a “person” (emphatically not a living entity) and cannot be said to “live” anywhere, cannot drive a car or eat a meal or sleep in a hammock, and cannot, therefore, be considered in any sense to be an “inhabitant” – though it may be argued that a corporation is a resident, insofar as its Registered Office is where it ‘resides’ – though does not ‘live’.

The bottom line, therefore, is that NYCC has to pick up the tab!

No inhabitant of North Yorkshire can legally be forced to pay – at least until or unless there has been a change in the law.

Of course, motorists who receive PCNs – or any other demand for payment of “duties and liabilities” – for failing to pay for a ticket that they neither requested nor received – may prefer to pay up anyway, out of sheer perversity. That is a matter for them.

However, motorists who are “inhabitants” of North Yorkshire may, if they wish, pass on their “duties and liabilities” to NYCC at County Hall – and would be acting within the law to do so.

In order to make this fact clear to CEOs (“traffic wardens”), who are “only doing their jobs”, it might be helpful to print out the image at the top of the page and display it behind your windscreen – thus allowing the CEO the opportunity to refrain from generating untold reams of inconsequential correspondence (and legal costs) at Scarborough Borough Council – and, thereby, sparing the public purse a great deal of futile expenditure.

Incidentally, I have been urging NYCC to look more closely at the legal position with regard to the on-street parking regulations in Whitby (and their associated function of underpinning the running-costs of the Whitby Park-&-Ride – and possibly the NYCC Pension Fund deficit) for about a year now. They do not listen. I do not know why they have ignored my advice. Perhaps they think I am a fool.

Perhaps they are considering whether or not other demands for payment issued by Scarborough Borough Council, such as Council Tax, National Non-Domestic Rates (Business Rates) and even charges for special waste removal charges and dog-fouling, are also legally enforceable.

Frankly, I hope that they will examine the situation afresh, right now. Today.

But as Charles LAMB would have it, here cometh April again, and as far as I can see the world hath more fools in it than ever.