There has been a furore over the weekend regarding the revelations about the rabid paedophile offending of the former Liberal MP Sir Cyril Smith, revealed by the publication of a book revealing the full range of Smith’s perversion.

In his book “Smile for the Camera: the Double Life of Cyril Smith”, Labour MP for Rochdale Mr Danczuk details Smith’s ‘rapacious sexual appetite’ and highlights chilling similarities between the MP and fellow paedophile Jimmy Savile.  He also details how Smith was protected from arrest by the Police, Crown Prosecution Service and MI5.  Summary here.

On 24th January 2013, Real Whitby also raised concerns about the parallels between Smith and Savile, as part of our campaign to expose the way that Savile and Jaconelli were obviously protected by North Yorkshire Police:

“Savile’s close relationship with Cyril Smith, referred to above, is very interesting and revealing. Both men shared a close friendship for forty years, no doubt reinforced by their common sexual preferences. Both were devoted to their mothers (Smith made his mother the Lady Mayoress of Rochdale and Savile referred to his mother as “The Duchess”), never married, escaped detection by the Police, evaded prosecution by the Crown Prosecution Service for the whole of their criminal paedophile careers, thereby escaping any consequences for their crimes during their lifetimes, although they were known to the Police and the CPS.

According to The Mirror, Cyril Smith was connected to another paedophile named Horgan who was also involved in the Satanic and sado-masochistic abuse of children. The article alleges:

Although it must be stated we only have circumstantial evidence linking Savile to the paedophiles who are alleged to have committed offences in the Rochdale “Team/Ring”. Given his obsessions and that he is alleged of have thought of committing sexual offences against children “every waking minute”, it is unlikely that this was coincidence or that Savile would have been unable to resist the temptation or pass up the opportunity of participating.”

One of Smith’s victims, Mr Alan Neal, courageously spoke out and said that at the age of 11 he was hit by Smith at a hostel for boys. Neal said: “I’m speaking now because someone has taken a right decision to raise this issue with the authorities.” He added that he told Police about the incident in 1968 when he left the school but on raising it “everyone made the same comment that the person in question was a very important, powerful man”  http://en.wikipedia.org/wiki/Cyril_Smith

On one occasion the Chief Constable of Lancashire personally intervened to prevent Smith’s prosecution – clearly a deeply corrupt act.

In September 2013, Andy Rhodes, Assistant Chief Constable of Lancashire Constabulary, told delegates at a child sexual exploitation conference in Lancashire: “The reason Cyril Smith, Jimmy Savile and Stuart Hall got away with what they got away with, which was serious prolonged sexual exploitation of young people, was because leaders who had responsibility to do something, did not do it. They turned a blind eye. Buried their heads in the sand”.  Full report here

Real Whitby is not homophobic, anti-Conservative, anti-LibDem or anti-Police.  As a local news magazine we are implacably opposed to crime and corruption by whomsoever commits it ,whether it is a person or politician of whatever persuasion, or a Police Officer. The vast majority of Police Officers are decent, hardworking, and execute their duties to the best of their abilities often under difficult and dangerous circumstances. This includes the Officers that currently man Scarborough Police Station, who in recent years have conducted a number of successful operations against paedophiles in Scarborough.

This does not change the fact that, historically, North Yorkshire Police let down the people of Scarborough and Whitby very badly by allowing a dangerous paedophile-ring including Jaconelli, Savile and others to offend for fifty years, despite being explicitly aware of what was going on and having enough evidence to arrest them.

Organised crime can only exist with the acquiescence and assistance of corrupt police officers. 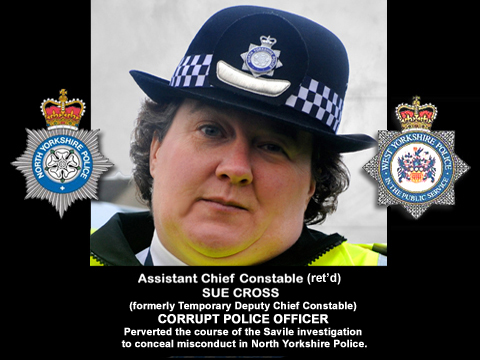 The blatantly perverse report by Assistant Chief Constable Sue Cross falsely exonerating North Yorkshire Police of any blame for its inexcusable failure to detect and arrest Jaconelli, Savile and the other members of the ring that operated in Scarborough and Whitby for fifty years with the full knowledge of North Yorkshire Police is a disgrace. There isn’t enough chalk in the whitewash.

Assistant Chief Constable Rhodes is obviously an Officer of integrity who has the honesty to admit that his Force performed badly and has faced up to Police corruption.

Instead of turning a “blind eye and burying his head in the sand” (as every other leader in North Yorkshire Police did before him), it is time for Chief Constable Dave Jones to show leadership and integrity of the same standard that Assistant Chief Constable Rhodes has displayed – and admit the truth.