I was unable to watch the SBC Cabinet Meeting of Tuesday 17th November 2020 in its entirety. After the first few minutes, I was doubled over in irreverent laughter at the Leader’s face when he walked slap bang into a simple but well-laid pratfall.

The Leader, in his capacity as Chair, welcomed Mr James CORRIGAN – whose interactions with Councillor SIDDONS have been documented on the Enquirer, here and here.

Mr CORRIGAN’s Question at first seemed quite innocuous. On the face of it, it covered old ground, and only old ground. It concerned the Council’s proposed lease arrangement with Futurelets Ltd, the company (wholely owned by Coventry University) which, it is intended, will manage the tenancies of the CU/NHS students/nurses for whom the ARGOS redevelopment is supposedly going to provide accommodation:

“Is the Council concerned that the proposed lease with Futurelets Ltd has a 10 year break clause?

(It is widely known, BTW, that the Council’s £22 million borrowings to finance the ARGOS project are over a forty year term. Quite how the last thirty uears of this commitment will be serviced remains unclear).

Council Steve SIDDONS [Lab.] responded to this Question in his wonted inimitable fashion – evasively. Instead of a straightforward “Yes” or “No”, followed by a brief statement outlining the reasoning behind his answer, the Leader sent Mr CORRIGAN off on a paper chase by referring him to a Report to Cabinet (dated 16th June 2020) and a Report to Full Council (dated 12th July 2019) – this latter being the famous ‘leaked’ Report, the ‘leaking’ of which has allegedly been under investigation by the North Yorkshire Police for the past 16 months.

In passing, readers may wish to share my mirth at the so-called ‘Reasons’ promulgated by the Council in support of its proposed regeneration/redevelopment of the former ARGOS building (which, in keeping with the Council’s wonted predilection for subterfuge) has now been re-named (i.e. disguised) – for Planning Purposes – as 50-59 Newborough.

Have a good chuckle at these ‘Reasons’: 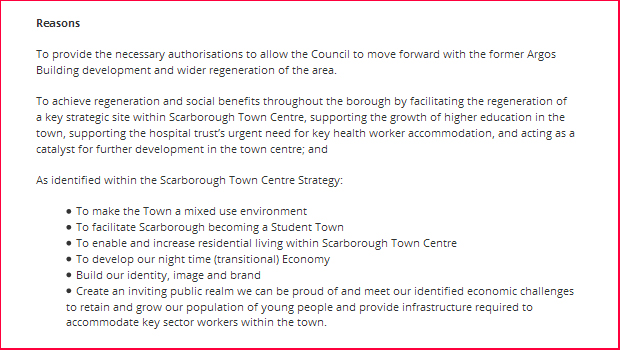 Only in Council-speak could such insubstantial drivel be uttered with a straight face.

Moving on from the Leader’s ‘open and transparent’ obfuscations, Mr CORRIGAN responded by asking if he might now proceed with his follow-up Supplementary Question. The Leader acquiesced, albeit with visible reluctance.

“I accept that the Travelodge CVA effectively forced the Council to accept a reduction in rent. However, I am not aware of a CVA for Sheffield International Venues. Has the SIV mid-term lease surrender set a precedent?”

Question? What a scorcher! Mr CORRIGAN is alluding to the fact that, under pressure from a large number of other creditors, the Council had little choice but to accept the terms of the Company Voluntary Arrangement (CVA). In the case of SIV, however, the Council was under no such pressure; it simply let SIV walk away – and thereby set a precedent that every other Council tenant can call upon.

One wonders what tenants on the north side of Scarborough will make of this . . .

So it was an ashen-faced Councillor SIDDONS who delivered this most feeble response:

“Well, that’s a question for which I had no prior notice so I will make sure you get a written response to that, Mr Corrigan. Thank you.”

That written response will presumably be minuted. We shall see . . .

But readers may wish to watch the video for themselves. Look at the top right sub-frame of the Zoom image and you can watch the mouth of SBC Legal Director Lisa DIXON sag open as though she has been slapped in the face with a Scarborough woof. Financial Director Mr Nick EDWARDS is also looking decidedly queasy.

Perhaps Mr CORRIGAN, whose previous Questions have been forensic in nature, has decided to play hardball. Behaviour breeds behaviour. I look forward to observing the general tenor of his next gambits.

The enormity of Mr CORRIGAN’s Question is easily explained.

What Mr CORRIGAN has done is to identify the fact that, by varying the lease of Sheffield International Venues (SIV) – in this case, by surrendering it, thus releasing SIV from its obligations under the terms of its lease agreement with the Council without penalty, the Council appears to have set a precedent.

That precedent could allow any and every Council tenant facing ruin in consequence of the COVID-19 pandemic’s debilitating effects on the viability of her/his business (or for any other reason) to simply walk away Scot-free, without the recourse to a Company Voluntary Arrangement (CVA), and thus (in layman’s terms) tell SBC to either stick its worthless lease where the sun never shines – or come to the negotiating table. 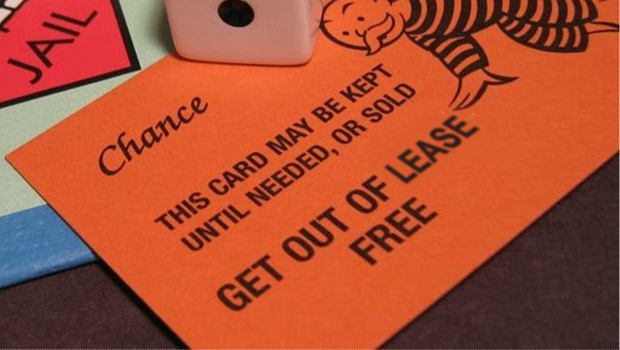 To be quite clear, more slipshod contractual paperwork has effectively offered every Council tenant in this Monopoly-playing Borough a Chance – a chance to vary, or discontinue, her/his lease. What kind of a hole would that make in the Council’s accounts?