During the late summer of 2014, I published a series of articles addressing the extraordinary conduct of Lincolnshire County Council.

The issues raised in those articles may find a new resonance in light of the following article published by This Is Money UK – published 21st march 2015.

Bearing in mind the generalised capping of Council Tax, the revenue imperative should be understood in the context of savage cuts to public services and amenities. There is no greater priority amongst Council Officers than the problem of how to defray the enormous pension fund deficits. They have, after all, a very personal (though undeclared) interest. The objective is to draw more money in retirement than they ever drew in salaries during their working careers.

Inevitably, on-street and off-street parking present opportunities for Councils to implement aggressive revenue extortion. I have pointed this out in relation to the absurd antics of Scarborough Borough Council (SBC) and, less directly, North Yorkshire County Council (NYCC) with regard to the by-now infamous parking regulations in Whitby.

The parking racket would be bad enough, but now we must contend with the forthcoming elections.

Incumbent Councillors are so fearful of failing to be re-elected (and thus losing out on their Allowances and Expenses) that they find themselves pandering to their core supporters with utter disregard for whether or not their pandering can be legally supported.

A prime example is NYCC County and SBC Borough Councillor Joe PLANT, whose SBC seat in Whitby West Cliff is dependent on the support of the hoteliers who are innately inimical to the nation’s 250,000 motor-home owners – to say nothing of foreign visitors – who spend no money in their hotels and guest houses, but certainly do spend money in the town at large.

Councillor Joe PLANT is so desperate to retain their support that he appears to have evinced a total disregard for what Councils may (and may not) legally implement – as these emails from him to Area 3 Highways Manager Nick WEST (now retired) so clearly demonstrate:

Never mind whether or not it is legal – just keep those core voters happy, for heaven’s sake!

Councillor Joe PLANT would like everyone in Whitby to believe that his influence has played a significant  rôle in persuading DEFRA to relax its up-front match-funding condition on the £4.8-million it has pledged for the repair of Whitby Piers. 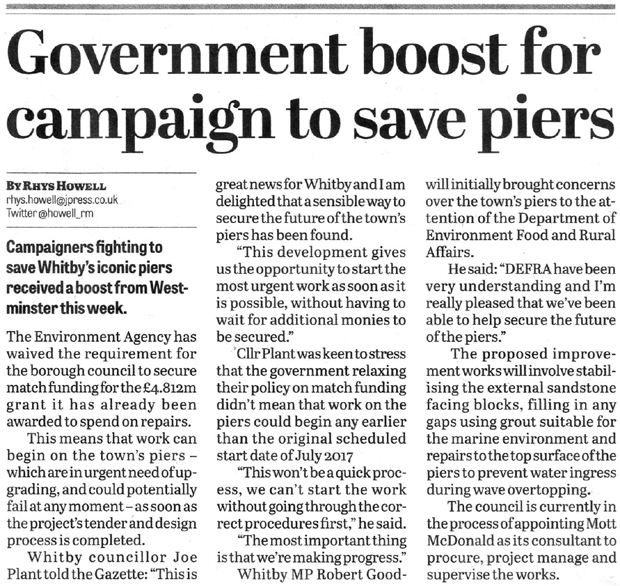 But Robert GOODWILL has debunked poor old Joe’s bid for folk hero status. Here is an email on the subject from Robert GOODWILL MP to Neil KIPLING. (Neil is a candidate in the forthcoming SBC elections). In it, Bob is claiming the credit for himself alone – “My intervention . . .” – and a dubious credit it is, at that, because work will anyway not begin until 2017/18:

The £4.8m was linked to match funding from SBC.  My intervention with Dan Rogerson, the DEFRA Minister, resulted in this obligation being lifted.  Result for Whitby.

Asda were never interested in the Dean Road site.  The deal fell through after a Liberal Democrat challenged the road closure and delayed the scheme until the option that Tesco had had lapsed.

Get your facts right for goodness sake!  Hope you can stack up any allegations about “going behind the electorate’s back”.  There are laws in place to address malicious claims made during election campaigns.

Rude, isn’t he? And “Result for Whitby”? A two year wait? Not only the law is an ass.

In point of fact, the Enquirer has published a most enlightening Letter to the Editor from Derek ROBINSON,  who has kindly placed the true course of events before the public.

Returning to the subject of Council Legal Officers, I am encountering, almost on a daily basis, wholesale misinterpretation by them of the circumstances and terms under which Bye-Laws may legally be implemented.

The implementation of a Bye-Law to discriminate against recognised ethnic groups is patently illegal. but Councillor Joe PLANT and his like clearly do not give a flying flock for the law if it risks jeopardising votes.

One fundamental problem seems to be that neither Councillors nor Legal Officers have correctly understood the fundamental principle that Bye-Laws may only be implemented to address circumstances that are not already covered by primary legislation. For example, a local authority may not implement a Bye-Law to address littering, which is already prohibited under the terms of the Litter Act 1983.

An article in the Lincolnshire Echo of 25th March 2015 begins:

It is inconceivable (especially after the publication of my Open Letter to Tony McARDLE, the Chief Executive Officer of Lincolnshire County Council (LCC), published on 3rd September 2014 – a letter that should have sent the LCC Legal Department scurrying to re-examine the requirements of the Human Rights Act 1998 and the Equality Act 2010) that these rudimentary errors are still prevalent.

Councillors and Legal Officers have yet to understand that they cannot discriminate against Travellers, who are a protected ethnic minority under the terms of the Joint Agency Protocol for Responding to Unauthorised Encampments: 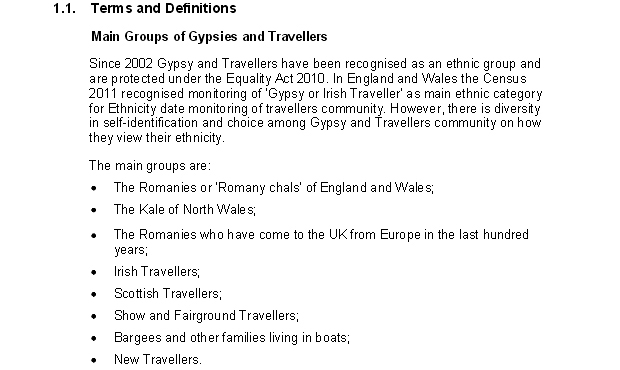 The key to grasping this mind-set that would prohibit anything that can be prohibited is the realisation that prohibition precedes prosecution – and prosecution brings in REVENUE. They are after our money. That pension fund deficit has to be replenished at any cost – preferably ours. That is the imperative that informs parking regulations, dog control orders and any other trumped up excuse to extract revenue.

So I come now to the latest in a long line of local authority Legal Department screw-ups – once again at LCC.

This concerns another approach to excluding Travellers by prohibiting overnight parking on the basis of vehicle height. The fact that height-barriers inevitably exclude vehicles other than motor-homes has escaped their attention – for example, saloon or 4×4 vehicles with roof-racks carrying bicycles, small boats, dinghies, etc, could all fall foul of a height restriction, irrespective of whether or not their drivers are Travellers.

But this is nothing compared to the inability of many Council Legal Officers to understand the English language. As one candid Councillor said, “I wouldn’t trust ’em with handling the conveyancing on my bird-table!”

The LCC Bye-Laws for Pleasure Grounds, Public Walks and Open Spaces (under which the Huttoft Car Terrace is included) can be viewed here.

The Law Is An Ass

My email to Richard WILLS refers to Article 5 of Bye-Law; it is self-explanatory:

Allow me to introduce myself. My name is Nigel. I am an investigative-journalist. I contribute to the North Yorks Enquirer and, from time to time, the Private Eye.

I am intending submitting an article at the end of this week concerning the LCC applied to Huttoft Car Terrace, which I have attached for your convenience of reference.

I am particularly concerned with Article 5:

I have reviewed the standard legal primary definition of the verb to LEAVE. 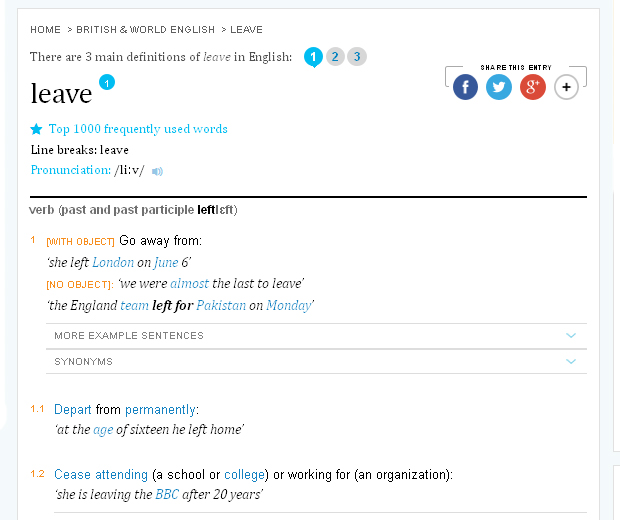 This is a clear statement to the effect that the Bye-Law prohibits “leaving”, “going away from”, “departing from” or “ceasing to attend” any motor vehicle between the stated hours.

This in turn is a clear statement that to “leave”, “go way from”, “depart from” or “cease attending” any motor vehicle is an offence under the Bye-Law .

It places a duty upon the motorist to remain in attendance of any vehicle between the hours of 10p.m. and 6a.m.

Curiously, I have received reports that suggest that LCC is in the process of bringing prosecutions against motorists who have specifically complied with Article 5 of the Bye-Law, by remaining in attendance of their vehicles.

Could I ask you please to provide a coherent statement for publication not later than 5:00pm on Friday 27th March 2015.

I would not wish to publish an article that conveys the impression that the LLC staff who framed the Bye-Law are utterly incompetent if, in fact, there is a rational explanation for the Council interpreting its Bye-law diametrically oppositely to the meaning of its form of words in the English language.

Of course, it would be churlish to conclude this article without disclosing what Lincolnshire County Council intended Article 5 to state, which is this:

Problem solved – and it was not taxing. (Geddit?).

Of course, it may be unfair to heap the whole of the blame onto the LCC Legal Department; it is more than likely that the Council adopted a form of words from a template document provided by the Department for Communities & Local Government (DCLG).

But the source of this ludicrous stroke of incompetence is, in the final analysis, strictly academic.

Whoever it was, she/he receives her/his salary from the public purse. What are we paying them for? Reversing the English language?

I know, I know. Never mind the quality of the service, feel the width of the pension.

To his credit, LCC Executive Director for Environment & Economy Richard WILLS has responded to my email in a timely manner, in the following terms:

Thank you for your e-mail.  Interpretation of the byelaw is a matter for a court. Since there are enforcement proceedings pending based on the byelaw it would be inappropriate for me to comment.

So Richard WILLS is relying on the Court to uphold LCC’s absurd reversal of English usage – and who is to say whether or not the Court will do so?

As Mr CAMERON is so fond of stating, “We are all in this together”.