Guest Author NORMAN MURPHY, SBC Alderman and former Councillor, shares his thoughts on the artist’s impression (shown below) provided with the Wrenbridge/Bucchleuch Properties Planning Application for the ‘regeneration’ of the former ARGOS building: 20_02167_FL

As readers will have seen, via the artist’s impression published in the Scarborough News on 30 September, the £30 million, totally ratepayer funded, ARGOS scam, which, if successful, will see 200+ bed-sits built in the Old Town of Scarborough, is still being pushed forward by (the so called leader of Scarborough Council) Steve (build me a Villa in Tuscany) Siddons.

Now as readers who have followed the ARGOS scam will know, this scheme, first put forward in July 2019, has, of late, run into some very tricky problems.

Elected members of the Council who were initially, way back in 2019, inclined to support the ARGOS development have recently, quite rightly, questioned both its financial viability and the adverse impact the scheme will undoubtedly have on Old Town residents.

This re-appraisal of the ARGOS scam has resulted, again quite rightly, in the whole ARGOS project being called in for scrutiny by elected members. The outcome of which, we may fairly assume, provided the committee investigating the scam is not packed with Siddons cronies, as it is rumoured it will be, will find that the ARGOS scam is, in fact, what it has always been, an elaborate con designed to make a few people very rich, and the many, the ratepayers of the Borough, very poor.

This is because in May 2022 elections will take place to establish a new UNITARY AUTHORITY, which will replace SBC, and, quite understandably, it is thought highly unlikely that the new Council would agree to Siddons ludicrous £30 million ARGOS scam going ahead.

Put simply, therefore, Siddons and his cronies are running out of time and unless they get the £22 million, most people think now £30 million, loan quickly into the Council’s coffers where, of course, Siddons and his officers will have total control over how it is distributed, the ARGOS scam will be dead in the water.

Which brings us to the hastily produced artists impression of what ratepayer can expect to get for stumping up £30 million to fund the ARGOS scam.

Now as anyone who has viewed the artist’s impression of the proposed development will have seen, the impression given, and the impression which Siddons wants to convey, is one of a vibrant well balanced development, with hordes of happy people going about their business enjoying the new facilities, utilising the ‘Town Square’ for example, which their benevolent Council (Siddons) will so generously provide for them.

However, the reality of what is actually being proposed via the ARGOS scam is, in fact, and all ratepayers should note this, as we, currently, and our grandchildren in future, will still be paying for it in 40 years’ time, is, it appears to me, totally different to the one portrayed in the artists impression.

Perhaps the first thing to highlighted is that the artists impression makes it look as though the 200-plus bedsits, to the left of the picture, and the very appealing ‘Town Square’, to the right of the picture, are both being built and are all part of the one development.

This impression is, however, totally misleading.

The ‘Town Square’ does NOT form part of the ARGOS development, it should of course, but the two elements of the ARGOS scam, the Town Square and the 200 plus bedsits are, in fact, two separate projects.

Although the ‘Town Square’ element of the ARGOS scam features prominently in all the propaganda produced by the Council it is, in fact, just a clever ploy included by Siddons and the Officers to win support for the ARGOS scam. It is in effect a bribe offered to the little people, the ratepayers, by a generous leader, Siddons, to get them to accepted the ARGOS scam.

What was promised in the ‘Town Squar’e element of the ARGOS scam, but never actually guaranteed, was that all the buildings opposite the iconic and historically important Scarborough Market, on a narrow street known locally as St Helens Square, should be purchased by the Council, and then demolished, providing a wide and impressive large open area in front of the historic Market Hall building.

This would open up the very impressive frontage of the Market Hall and provide a very useful, and much needed, open area in the congested Old Town of Scarborough which could then be used by residents, visitors and traders, for a variety of purposes. A very appealing prospect and one that most people would not, I am sure, for a minute disagree with.

However, as mentioned, the ‘Town Square’ was NEVER part of the original proposal; and is still NOT a part of the current proposal. The £6 million which it was estimated would be required to establish the ‘Town Squar’e does NOT form part of the £30 million loan needed to fund the ARGOS scam, this would be additional, presumably ratepayer provided, money.

Anyone viewing the artists impression, conveying, as it does, how Siddons wants residents to believe this is actually how the ARGOS scam will ultimately look, should discount any idea that the Council has either the intention, or the funding, to create the ‘Town Square’.

Indeed, anyone who is foolish enough to believe anything Siddons and the officers say is welcome to see the fairies at the bottom of our garden.

The inclusion of the Town Square in the artists impression has been inserted for no other reason than to give the impression, to gullible and stupid Councillors, that should they be mad enough to pass the ARGOS scam this is what residents will get. The reality, which I can assure elected members, residents and ratepayers understand only too well, is that should the ARGOS scam go ahead they will NOT get a ‘Town Square’, but they will get a huge bill.

Turning now to the building to the left of the artist’s impression. This shows a four-story building with retail units situated at ground floor level and 200-plus bedsits on the three upper levels. The impression given, and of course the impression Siddons and the officers want residents to believe, is that the new construction will be a modern well-proportioned building fitting seamlessly into the surrounding environment.

However, the reality is again totally different to the utopian dream Siddons and the Officers want, and of course expect, the (as they see us) passive and gormless residents/ratepayers, to believe.

What is being hidden behind the trees and the throng of happy people, and of course the fictitious ‘Town Square’, depicted so appealingly in the artist’s impression, is the construction of a slab sided carbuncle of a buildin – a building which has no architectural merit whatsoever.

A building whose sole purpose is to cram as many bedsits onto the site as is possible to maximise profit for the developer. A building which will dominate the surrounding area and should therefore be thrown out by the Planning Committee on the grounds of over development of the site.

A building which will, if it is allowed to be built, be viewed by future generations of Scarborians, as yet another example of how the Council, as it did when it allowed the impressive and elegant Pavilion Hotel to be demolished, and the monstrosity that now stands in its place to be built, has no regard for the wishes of residents or the preservation of our beautiful town.

Indeed, as I see it, anyone who views the artist’s impression of how the ARGOS scam will look, and actually believes this development is being pursued by Siddons and the officers to benefit the residents of the Borough of Scarborough, is either living in Cloud Cuckoo Land or is related to one of those who, should this monstrosity be built, will profit from its construction. 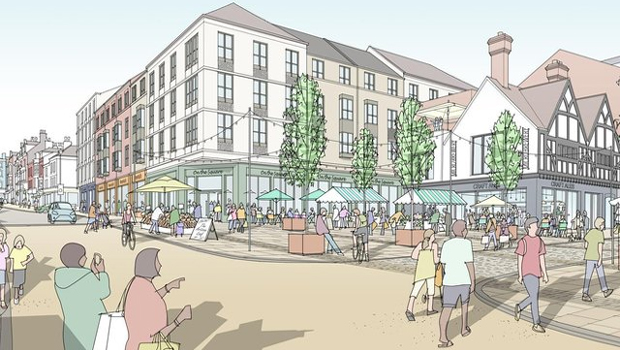 Which, speaking of construction, brings us conveniently to the on-going work I have heard is progressing very impressively on several elegant Villas in Tuscany, they should be ready to move into around May 2022, as I understand it, provided of course, nothing happens to interrupt the funding.

Siddons, it should be noted, still has six months to get the £30 million ARGOS scam through; so will it be Veni Vidi Vici (I came, I saw, I conquered) followed by, Arrivederci Baby (goodbye suckers, I am off to Tuscany), or will his Independent Group supporters, who thus far have kept him in power, grow a collective backbone and consign Siddons to where many feel he rightly belongs “the dust bin of history”?