An Open Letter from Mike McCARTHY of the Bram Stoker International Film Festival, offering a splendid solution to the continuing contention over the photographing of Goth beauties in the graveyard of St Mary’s Church, Whitby.

We as a festival like to keep our own counsel with regards the politics and the “he said, she said” arguments which tend to prevail during and after a certain twice yearly festival in Whitby.

The biggest areas of concern seem to be centred on the photographers and their “models” posing in the St Marys church graveyard and the lack of respect bestowed on the souls buried there.

Whilst this scenario will prevail year on year until a more official line of policing can be adopted we as a film and Production Company would like to propose the following to the Scarborough Borough Council, Whitby Town council and Diocese of York.

The green belt of land at the top of the 199 steps could be utilised in a similar vein to that of a movie set.  Why not build a mock graveyard, similar to the ones created specifically for movies to be used and managed for the photographers? This small movie set could be positioned to take in either the Abbey or St Mary’s church as a back drop for photographs. This movie set could be managed by a local company or maybe a volunteer team, with donations from the photographers to a local charity or for the upkeep of the props. I feel sure many of the local businesses may even sponsor the possible purchase of these props.

We as a festival would be happy to help in any way we can if this idea is embraced by the Town and community collectively.

As is the norm in these scenarios the question of planning will have to be considered. We would be happy to speak to the SBC planning department with this proposal if need be. I have spoken to the Chairman of the Whitby Dracula society and they are willing to help drive this proposal forward or will help if a committee is formed.

The legend of Dracula, Bram Stoker and the Gothic influences of Whitby both in films and literature should be embraced, it is not going to go away, and nor should it. We should seize the opportunity and turn the negative comments and arguments surrounding the graveyard and St Marys Church to our advantage. Let`s bring a bit of Hollywood into Whitby`s backyard and, managed correctly with professional props, it could be a winning solution to a long drawn out problem.

Surely if we can hang painted second hand bicycles from trees and hedgerows all over the region, we can do this!

The picture below is similar to a movie set we worked on a few years ago. Obviously it need not be on this scale, but with artistic imagination it offers an indication of what can be achieved. It may even become a tourist attraction in its own right!

If there are any individuals, groups or businesses who would like to discuss this proposal further, please express your interests to Mike McCarthy. Festival Director. Bram Stoker International Film Festival. 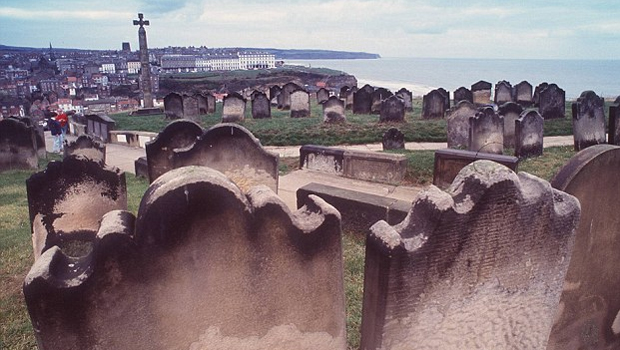