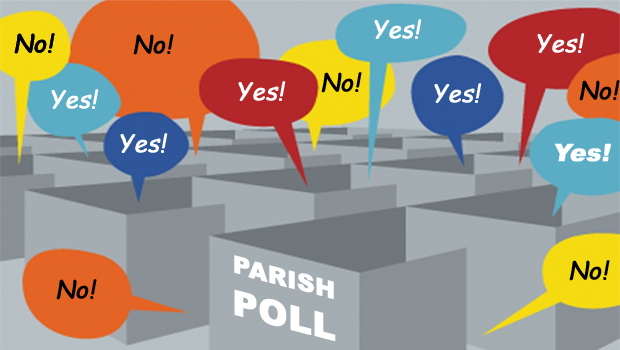 Readers of the Whitby Gazette will be aware that, at a Town (Parish) Meeting held at the Coliseum, Whitby, on Wednesday 18th April 2018, a Call for a Parish (Town) Poll was made by a Whitby elector. The conditions were met and notification was duly notified to Scarborough Borough Council by the Town Clerk, calling for a referendum on the Question:

As a ‘veteran’ of the 2009 Poll – on a similar but significantly different Question – I regard it as a matter of regret that the organisers of the present effort did not seek my opinion on the framing of the Question, which is poor.

Unsurprisingly, Scarborough & WhitbyMP Mr Robert GOODWILL [Con.] has lambasted the Call for Poll, calling it “a complete waste of time and money”. I disagree; democratic process is never a waste of time or money, except in the minds of those who (once-elected) take no further interest in the opinions of the electorate.

Before proceeding, readers are invited to review the Minutes of the Town (Parish) Meeting of 18th April 2018 – in particular, Item 3c:

The Returning Officer’s response (addressed to the Mayor of Whitby, Councillor Noreen WILSON [Lab.] (who chaired the Town Meeting) is entirely predictable. In some respects I find myself in agreement with Mr DILLON.

However, it seems to me that Mr DILLON has made a salient error, which I will explain following this scan of his response:

I plead guilty to having framed the form of words of the 2009 Poll: “Would the people of Whitby like to be part of a local authority independent of Scarborough Borough Council?”. I wonder if the Returning Officer realises he has paid me a back-handed compliment?

The process known as the Parish Poll (or Town) Poll is authorised under the Local Government Act 1972 (LGA72), Schedule 12, PART THREE, Parish Councils, Paras. 18 – 22, which may be reviewed here.

As can be seen above, the Returning Officer asserts that “it is deemed” (that word again) that the Question, as written, is not a valid Question. He goes on to set out 5 reasons for his conclusion. Of these, reasons 2, 3 and part of 4 are technically correct.

With regard to reason 5, it should be noted that nothing in the relevant sections of the LGA72 constrains the terms of the Question to ‘parish’ affairs, as Mr DILLON has stated. In fact, S.18(4) states:

18(4) A poll may be demanded before the conclusion of a parish meeting on any question arising at the meeting; but no poll shall be taken unless either the person presiding at the meeting consents or the poll is demanded by not less than ten, or one-third, of the local government electors present at the meeting, whichever is the less.

I have highlighted “any question arising at the meeting” for the avoidance of any doubt.

Charles ARNOLD-BAKER’s ‘Local Council Administration’ has this to say:

10.9 A poll may be demanded not later than the end of the meeting on any question arising at it. Such a poll must be held only if ten or one-third of the electors present (whichever is the less) insist or if the person presiding at the meeting consents. It is not clear what happens if the chairman alone calls for a poll but the outcome probably depends on whether he is an elector or not. It is essential that the wording of any question to be answered in the poll be settled before the meeting ends. The Chairman must immediately notify the district council (T) if a poll is required. It is held in accordance with rules made by the Home Secretary and the procedure is generally similar to the procedure for electing a local councillor.

Again, I have highlighted “on any question arising at it” for the avoidance of any doubt.

Also noteworthy is the last sentence. “The procedure for electing a local councillor” does not allow for truncated polling station opening times, and Mr DILLON (as Returning Officer) should be aware of that and not attempt to restrict voting to 9:00am to 4:00pm as he has in the past.

In any case, the question as to by which principal authority electors want the Parish of Whitby to be served is absolutely a ‘parish’ affair – perhaps even a fundamental ‘parish’ affair – so Mr DILLON’s reason 5 is terminally flawed.

Indeed, there is nothing in the relevant sections of the LGA72 that in any way confers upon a Returning Officer any discretion whatsover as regards the nature of the Question – that is matter for those electors present at the Town Meeting and no-one else.

Of greater moment is the error inherent in Mr DILLON’s reason 1.

It is totally inaccurate to state that a Parish Poll should “serve as instruction to the Town or Parish Council”. Between local elections, electors have no power to impose “instructions” on the Town Council – or, indeed, on any other authority. Nor does the LGA72 assert that a Parish Poll should have any such purpose. Moreover, there is no requirement for the electoral response to the Question to “serve as instruction”. Mr DILLON seems to be extemporising. I would urge him to download the Electoral Commission’s guidance document “Returning Officer Role and Responsibilities – PART A”, available here.

A Parish Poll is nothing more (and nothing less) than an expression of opinion, as asserted by a majority of those qualified to vote who actually attend the polling stations and cast a vote. But that is of little significance, since even if every elector in the Parish had voted – and voted unanimously in favour of secession from Scarborough Borough Council – no action would or could have been taken to implement that outcome. Parish Polls have no power or authority to effect any action other than the expression of an opinion. (As an aside, in the 2009 Whitby Town Poll, to which I was party, the turnout amounted to a pitiful 5.5%).

Further, in his eagerness to pile up a list of cogent reasons (not grounds) for throwing this latest attempt at a freedom of expression out of the window, Mr DILLON has made the cardinal error of failing properly to read and digest the Question in its entirety. In fact, in his eagerness to identify legal impediments, he has disregarded the first three words. Let us refresh our memories:

The Question seeks to elicit from electors nothing more than measurable clarity as to their wishes – “Do you want . . . ?”.

No Question as to one’s wants/wishes needs take account of the practicality, prudence or objective merits of those wishes. Wants/wishes are not negated by their impossibility. One may want/wish to be 20 centimetres taller; however, one will want/wish in vain.

The Question above, which seeks to elicit an opinion from electors as to their wishes, is completely and precisely analogous to the question “Do you want tea or coffee?”. The fact that neither tea nor coffee is presently available is of no relevance. The Question invites the respondent to declare what she/he wants – her/his preference; tea or coffee. Nothing more. It is the simplest manifestation of freedom of expression.

Do the electors of Whitby want Whitby to leave SBC and NYCC and become part of TVCA? Very possibly that is exactly what some of them want – whether they may have it or not – in which case, it may displease them to learn that such a change in local government arrangements is not (as Mr DILLON rightly points out) even remotely on the cards. But Mr DILLON has no power to prevent or prohibit them from wanting it.

There is an alternative route – a Petition for Governance Review. This is a topic which deserves an article in its own right. For the moment, suffice it to say that it sets a high hurdle; such a Petition requires the signatures of 10% of the Borough (not the Parish) electorate – over 7,500.

Nevertheless, the Local Government Act 1972 (LGA72), Schedule 12, PART THREE, Parish Councils, Para. 18 – 22  grants electors the right formally to express, on the record, their wants/wishes. In this respect, we may be reminded of last year’s three No Confidence Votes (No Confidence, that is, in the SBC Leader and the Cabinet – and, in the case of Filey Town Council, Mr DILLON himself). I hope we are all clear that even had the Vote carried, the Leader was under no obligation to take the slightest notice. Like the Parish Poll, the No Confidence Vote was nothing more (or less) than an opportunity to voice an opinion.

All the foregoing notwithstanding, a Parish Poll – though, in the harshest view, nothing more than an empty gesture – is a fundamental right; the right to say one’s piece – even in the knowledge that one is to be ignored.

As we have seen, there are good grounds to challenge what Mr DILLON asserts “is deemed” (by whom?). But no challenge will emerge. A challenge will not emerge because those electors who voted in favour of the Parish Poll have no ‘voice’. The only ‘voice’ they might have is that of the Chair of the Town Meeting – the Mayor of Whitby, Councillor Noreen WILSON [Lab.] – who has an interest to declare, insofar as the LGA72 decrees that it is Whitby Town Council (in fact, its Precept payers – the Whitby electorate) who must pay the costs of the administration of the Poll (likely to be between five and seven thousand pounds) to SBC, which the Mayor assuredly does not wish to do.

Both Councils’ predilection for denying people a voice is well-known.

The pro-Poll contingent in Whitby must go back to the drawing-board. Given Mr DILLON’s spurious ruling, if they wish to pursue their right to voice an opinion they willl need the Mayor, or two Councillors, or six electors to raise a fresh Call for a Town Meeting, and a fresh Question for Poll. They will also need ten electors (or one-third of those present, whichever is the lesser) at the Town Meeting to support a Call for Poll. And to draft a half-decent Question.

I would advice them to review this plain-language guide to Parish Poll published by the pro-democracy group I Want  a Referendum, downloadable here.

And I have prepared a template ‘Call for Town/Meeting’ document, available for download here. For the Call to be valid, the signatures of six electors (together with their respective addresses, post codes and electoral numbers – available from the Town Hall or Town Clerk) must be obtained. I have found it wise to obtain ten or a dozen – it is surprising how many people believe they are electors of a given Parish who, in fact, are not (due, for example, to living just outside of the Parish boundary). Alternatively, a Parish Meeting may be convened by the Mayor/Chair alone, or any two Councillors, without recourse to the electorate.

I have left the Question blank. That said, I am happy to advise any Filey or Eastfield Town Councillors on a suitable form of words.