A Free Press in Local Government 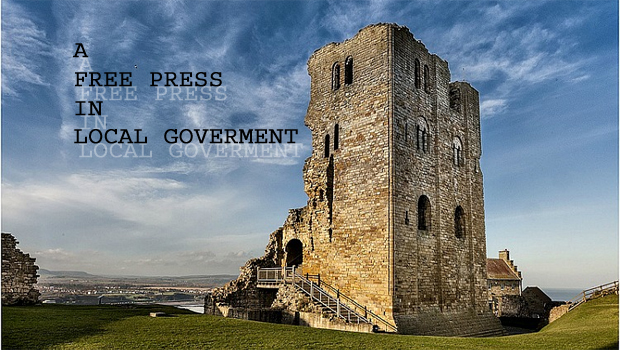 A Letter to the Editor from author and political commentator Anthony GREEN, of Filey, who offers his views on the functions of a free press in local government, in the modern age.

I refer to your piece in the North Yorks Enquirer dated 5 August 2014 (“Another Voice Raised Against Corruption”). Following on from that, I understand that the Scarborough Council Deputy Monitoring Officer (Regulatory and Governance Manager) has deemed Nigel Ward guilty of Vexatious and Manifestly Unreasonable requests and, in doing so, neatly avoids having to respond to ANY of Nigel Ward’s enquiries about alleged wrongdoings in relation to the Council. How very convenient.

During recent times, I have seldom, if ever, seen such a scandalous catalogue of reports delivered in a public medium by Nigel Ward and other investigators. What is so shocking is that these reports have been allowed to continue without being addressed. From these published reports, I see Officers accused of acting beyond their remit, bullying and falsehood. I see journalists threatened and a climate of fear being introduced to dissuade individuals from expressing opinion made against those who are elected or employed to serve us. In addition, I see accusations of free speech being hampered by the attempted removal of a website.

These accusations have developed a momentum of their own, and have the dubious benefit of an ever increasing and wider audience, indeed even after being aired on National Television; they STILL have not been addressed. At first, the allegations were titillating before they descended into a gradual downward spiral, with an ever widening net encompassing not only servants of the public, but our Institutions. As you will monitor these reports on a regular basis, I need not elaborate. In my opinion, the whole scenario has reduced the standing of the Town Hall, its Elected Members and Officers who serve the public, to a point of public ridicule.

The nub of the argument is this; Nigel Ward is either correct – or he is not.

The Deputy Monitoring Officer states that Nigel Ward raises personal attacks against Council Officers, Elected Members, and others associated with Scarborough Borough Council. He goes on to say that requests and correspondence place a significant burden upon limited Council resources. They cause disruption, irritation and distress, and are disproportionate and unjustified. And that it is the Council’s duty to protect its Members and Officers from unreasonable behaviour, distress and harassment. Clearly, he is sending a signal that accountability is second to the considerations of a few, and an annoyance to the otherwise ‘serene’ administrative dealings of the Council.

He makes no reference to the Council’s duty to uphold the letter of the Law and to act with integrity, nor does he provide any reply to the scandalous public accusations that have been made. Just an excuse for not providing a reply at all.

Democracy is a very important part of our fabric – hard won but easily lost. In particular, Local and Regional Democracy is perhaps the most important of all. While it ebbs and flows in its various shades and crises, it is what separates us from other less than desirable regimes, and has thus far allowed this country to be what it is. A vibrant Democracy and a free Press are the oil that lubricates our communities and allows us to use our right to express our opinion. It also allows us to democratically elect officials to serve us to affect a change for the good. It follows that the people we elect or employ to serve us are not machines, they are human. They make mistakes. They make misjudgements. We in turn should have the good grace to respect this, and give our consideration when these are owned up to.

However, these Officials, both elected and unelected, are SERVANTS of the public; they serve us. Some of them stand repeatedly accused and by acting in an autocratic manner and failing to account for themselves they are a poison to the Democratic system.

Candidates for Election who are steadfast and true should have no fear in standing for Office, but how can the new generation of our leaders be encouraged to serve when a system that is portrayed as a nest of vipers? They are not – it is the system that is discouraging them, and it is our loss.

To reiterate, Nigel Ward is either correct – or he is not. When will his queries (and those of the other investigators) be addressed?