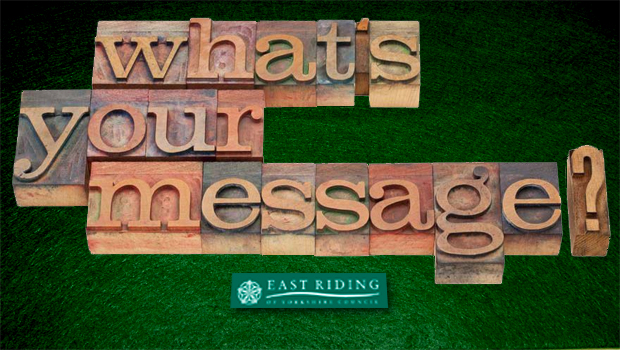 The 21st Century thus far has proved to be the age of communication. Never before was some much information so readily accessible to so many people. Never before was so much information communicated in text and image to so many devices. Consequently, there has been a marked decline in the sales of hard-copy newspapers. But this decline is beginning to show signs of levelling off at what may be termed a residual level. So local rags may not go to the wall quite so swiftly as one may have expected.

Especially in rural communities, with their larger proportion of pensioners in their demographic, local rags are often the preferred local news medium. Usual published weekly, they offer a round-up of local interest topics and the information is disseminated more widely than the raw readership figures would suggest – passed around during the course of each week amongst family members, work-mates and drinking companions at the local pubs and betting offices.

So it is easy to understand it when Councils – and, in this case, East Riding of Yorkshire Council (ERYC) – elect to advertise in local rags, with the bonus that the Council taxpayers’ money is re-injected into the local community through the pay-packets of the journalists and advertising reps employed by the local rag.

And, granted that a picture is worth a thousand words and that a picture with text may be worth that much more, it would be difficult to fault ERYC in principle for running the following public information cartoon in last week’s Pocklington Post (and very possibly several other East Riding local rags): 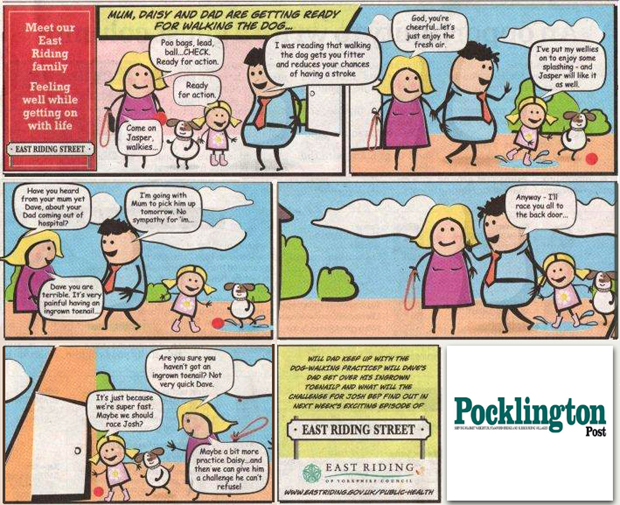 But I confess to being unable to discern THE MESSAGE.

Let me outline what I have managed to discern.

Dog-walking providers exercise for both dog and dog-walker(s). Every dog-walker knows this. The responsible dog-walker’s checklist is a bonus, though once again, this information is already widely known.

Fresh air is beneficial. Again, this is true – but it is also already widely-known. The benefits of splashing in puddles have never been explained to me, though I grant that it can be fun.

The father is unsympathetic to his own father’s hospitalisation. Why would EYRC postulate a fictional unsympathetic father to feature in a Public Health message?

The family race back home. At a stretch, this may be seen as a re-iteration of the first frame – exercise is good for you. Again, this is already widely known – certainly to every reader of the Pocklington Post and other East Riding local rags. Only pre-readers are likely to be unaware of the benefits of exercise and fresh air.

The cartoon-strip is a Public Health message from ERYC. I discern this from the EYRC logo and URL-link to the Public Health page: http://www2.eastriding.gov.uk/living/health-and-wellbeing/public-health/. It seems to be concentrating on the benefits of exercise. As for the stinger: “What will be the challenge for Josh?”, I am at a complete loss. I do not know who ‘Josh’ is – or why his destiny might matter to me. Do you?

If any reader is able to discern something more, I would be intrigued to learn about it.

But whatever the sense in the strip-cartoon, it is fair to assume that EYRC paid good money to run it in the Pocklington Post.

My question is this:

At a time when rural bus services and library facilities are being decimated by the Toxic Tory ‘austerity’ measures, what possible justification can be found in squandering the public purse to convey the crucial and hitherto universally known information that exercise and fresh air are beneficial? What did the taxpayers of the East Riding stand to lose were this information withheld from them? Nothing. And they have gained nothing. But they have paid something.

Think about it . . . ERYC is spending money that surely need never be spent – whilst front-line services are going down the pan.

Certainly not the readership of the East Riding local rags – who are all surely thoroughly acquainted with the notion that exercise and fresh air are beneficial.

The cartoonist? If so, was that an ‘in house’ expenditure? Or has some external graphic design house been commissioned to produce the cartoon – one of a series, by the way? Was there a proper Procurement Process? Or has this contract gone to a ‘preferred contractor’? A ‘job for the boys’?

And ERYC publishes its own newspaper, delivered to every household in the County. So was this expenditure in any way necessary?

I could pose more questions, but fortunately ERYC has already posed them: 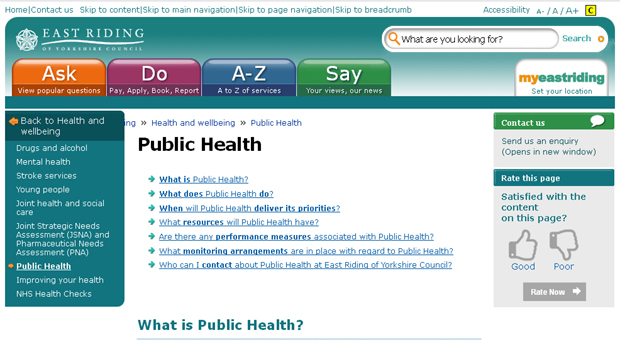 All of which cost money. Taxpayers’ money. I must look into that.

Meanwhile, campaigner Andy STRANGEWAY has taken the first steps in pursuit of some accountability:

Could I please refer you to https://andystrangeway.wordpress.com/2015/10/05/eryc-cartoon-what-is-the-message/.

Under the Freedom of Information Act could I please request all information held in relation to the cartoon to include: