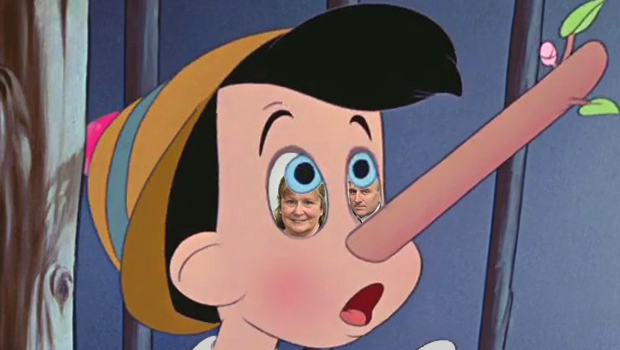 On 29th September 2019, an Open Letter of mine entitled “DBID: Money With Menaces?” appeared in the Enquirer with astonishing consequences which, following a brief resumé of the story so far, I am about to relate.

In my earlier article, I did not disclose the names of the business proprietors or of the Councillors involved.

It would now appear that this has become public knowledge: the two ward Councillors were Councillor Mike STONEHOUSE [Lab.] and Councillor Stuart CAMPBELL [Lab.], in whose ward (Streonshalh) the two Whitby business proprietors operate.

It transpired that there is a recording of the conversation, from which the following has been transcribed and attributed to ‘newbie’ Councillor Mike STONEHOUSE:

(I can now confirm that Councillor C‘s name – redacted by me – is that of Councillor Liz COLLING [Lab.], who is the Portfolio Holder for Economy, Communities & Commercial and therefore responsible for matters pertaining to the DBID. Any statement from her should be definitive).

I have, of course, offered Councillor STONEHOUSE a so-called ‘right of reply’. Or simply to say “No comment”.

Councillor STONEHOUSE has not contacted me. Perhaps (who knows?) he has been ‘instructed’ not to contact me.

Setting aside the mean and vindictive spirit underlying the statement, questions regarding who is actually in control of the supposedly “business-led”  Yorkshire Coast DBID (YCDBID) arise – is it (i) the Directors of that private sector Limited Company, or (ii) Scarborough Borough Council?

This Council, in both its present and immediate-past manifestations, has always maintained that it has no executive role in the DBID – indeed, no role beyond running the ballot and collecting the levy. Where lies the truth?

My Open Letter was addressed to Councillor Liz COLLING [Lab.] who is, without doubt, the proper person to whom such questions are to be posed, in the public interest.

That was one week ago.

Councillor COLLING has not acknowledged my Open Letter and she has not responded to it. So much for the new era of “openness and transparency” so loudly trumpeted by Leader Councillor Steve ‘Playboy’ SIDDONS [Lab.]. Shutters down, doors locked.

(As an aside, readers will note that my message to Councillor COLLING is courteous and respectful; hers to me, being non-existent, is pig ignorant. Yet I am the one ‘deemed’ to be “vexatious”. That will be a tenner in the ‘Hypocrisy Jar’, please, Councillor.

However, a Conservative ward Councillor in the Whitby West Cliff has since approached Councillor COLLING seeking some answers for himself and his own electors. Over to Councillor Alf ABBOTT [Con.]:

Please note that I have not redacted the name of Mark MILLER, a Whitby businessman who sits as a Director on the Board of the DBID company. I have included it with his consent, having sought his opinion on the statement attributed by Councillor STONEHOUSE to Councillor COLLING. Mr MILLER tells me that he is at a loss to explain the remarks attributed to Councillor COLLING and will be raising the matter as a priority at the next YCDBID Board meeting – Wednesday 9th October 2019.

Meanwhile, Councillor COLLING has responded to Councillor ABBOTT, as we shall now see – somewhat dismissively: 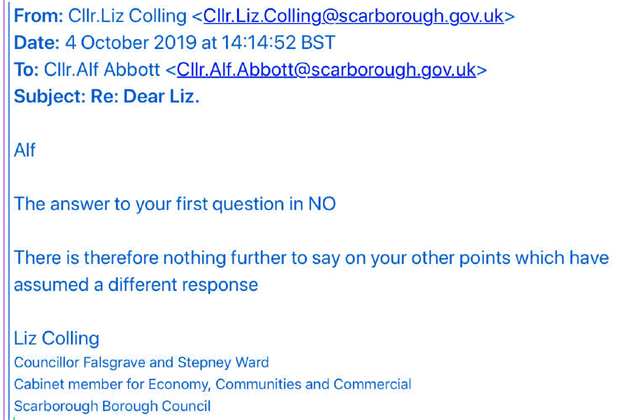 Readers will note that Councillor COLLING has made no attempt to pass off Councillor STONEHOUSE’s assertion as a misunderstanding.

She offers only a flat denial – “It wasn’t me, guv! Honest!” – thus calling Councillor STONEHOUSE a liar.

Councillor ABBOTT then responded to Councillor COLLING in the following terms: 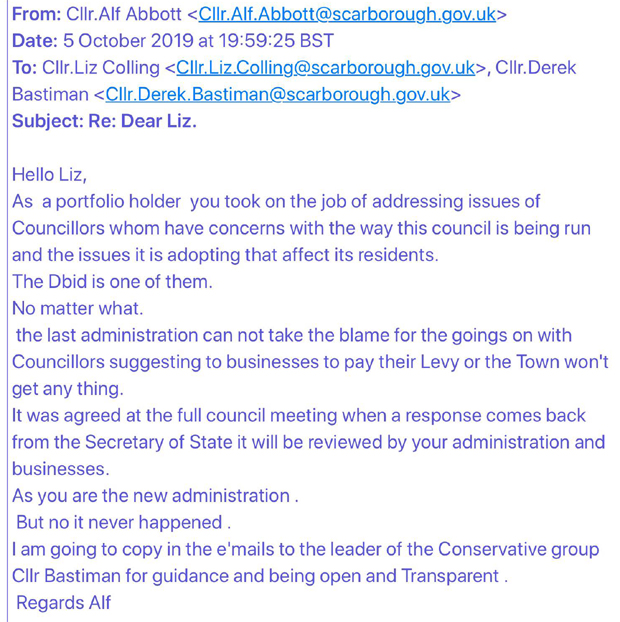 Despite its reasonable and respectful (if somewhat chagrined) tone, Councillor ABBOTT’s response elicited no further information – just a stiff middle finger. Protesteth the lady too much? 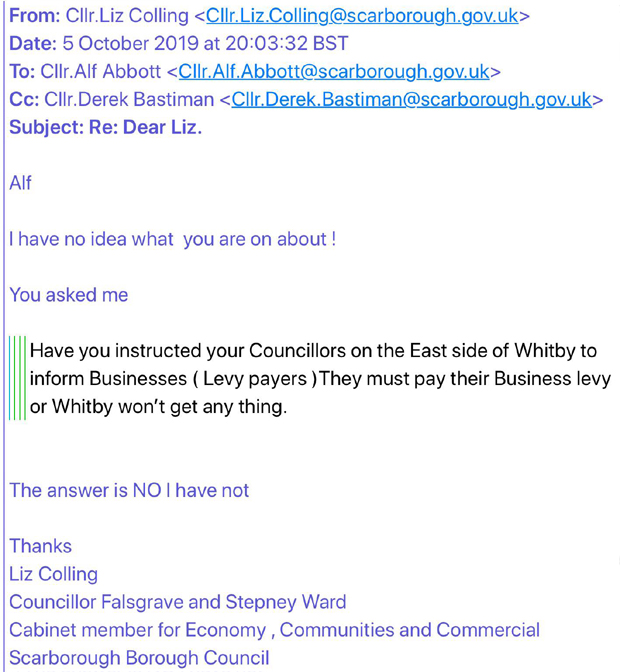 I hope we can all agree that Councillor COLLING has emphatically denied having stated that if Whitby businesses resisted the DBID, the town would get nothing. However, she has provided no exculpatory explanation. She has called no witnesses. She has cited no mitigation on Councillor STONEHOUSE’s behalf. None of the trappings of “openness and transparency”. In fact, she has been as tight-lipped as it is possible to be – and mercilessly hung Councillor Mike STONEHOUSE out to dry.

This leaves me (and readers) with a choice of interpretations:

1) If Councillor COLLING is telling the truth, then she is doing so at the expense of calling Councillor STONEHOUSE a liar.

3) If Councillor COLLING is NOT telling the truth, then she is a liar and her position is untenable; she must resign with immediate effect.

And if the “open and transparent”  Leader is unable to present a plausible resolution to all this, at or before the next meeting of Full Council (on 4th November 2019), the following questions arise: