When the COVID-19 pandemic started, the NYE realised that as a responsible media outlet, it had a duty to support the efforts of the Police and NHS to ensure public safety. As part of this, the NYE team was determined not to disseminate misleading information to the public.

The NYE published a letter from one of our readers that was critical of remarks made by Superintendent Walker of North Yorkshire Police (NYP) and the way NYP is applying the lockdown regulations. The relevant extract is below:

“Supt Mike Walker, who is in charge of North Yorkshire Police’s Covid-19 response, said: “Those living in tier three areas are advised not to travel out of the area unless it is necessary, such as for work or education.

What on earth objection could there be for me (in Middlesbrough – a Tier 3 Area) walking up Roseberry Topping? Including the final two or three steps to the summit trig point which is just over the “border” in North Yorkshire (Tier 2 Area).

Should I expect to meet PC Plod on the “border” telling me I can’t take those final two or three paces?

He warned people living in tier three areas not to “try to side-step” the tighter restrictions by visiting neighbouring tier two places for a day or night out. 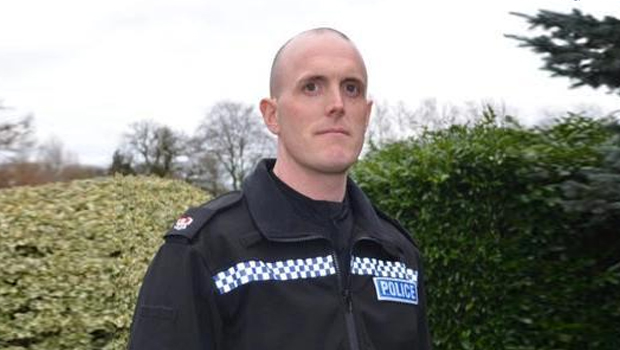 This criticism seemed to me to be unfair. To cut down on the spread of infections, the police have to restrict movement from high risk areas into lower risk areas. In their defencem I penned a short article in which I stated:

“Concerning the Roseberry Topping issue, the Tier 3 regulations applying in Cleveland & Redcar for physical activity like walking are: “You can continue to do unlimited exercise alone, or in an outdoor public place in groups up to 6.”

So, in principle, there should be no reason why our reader can’t walk to the top of Roseberry Topping (Illustrated above; the photograph is taken in North Yorkshire showing the view over Cleveland & Redcar), as our reader above points out.

ACC Walker’s remarks are very clear and refer specifically to people crossing in to North Yorkshire to carry out activities that are prohibited in Tier 3, but not prohibited in Tier 2. That is, going to the pub or “visiting neighbouring tier two places for a day or night out”. I feel sure he made them to inform the public and deter movement from Tier 3 areas into North Yorkshire.

I am unaware of any cases where anyone who is genuinely exercising and has crossed the border has been arrested or prosecuted. So it seems to me that the Police are interpreting the rules in a sensible and tolerant way in terms of the concerns our correspondent has raised.

According to this BBC article, NYP fined 14 people over four illegal house parties in Scarborough and a further three fixed penalty notices to people who visited Whitby from the Cleveland area.

Chief Inspector Rachel Wood of NYP is quoted in the article as saying:

This article has proven to be controversial, because one of our readers Mr Heinrik Porzel banged off a letter to the editor in rebuttal of my remarks, which can be read here.

Heinrik’s letter was articulate and well argued, so I think it appropriate to comment further. I have been concerned at the quality of some of the media coverage of the COVID regulations, which appeared to me to be sensationalist, inflammatory and wildly inaccurate.

The NYE is a responsible media outlet and cannot get involved in that sort of stuff, so I asked for clarification from Superintendent Walker, which is below:

Interestingly, in his response, Superintendent Walker confirms my own belief that some media coverage has been inaccurate.

Further clarification can be found from Chief Constable Winward can be read here.

On the relevant extracts from Heinrik’s letter therefore, I would comment as follows:

“The guidance to avoid travel from Tier 3 areas into Tier 2 areas is advice. It is not enforceable. As is clearly explained in the BBC article (which had no doubt been checked by its lawyers):

“While travel between tiers in England for journeys other than those deemed essential is not advised, it is not against the law, according to government guidelines“

The Government website covering Tier 3 restrictions ( https://www.gov.uk/guidance/tier-3-very-high-alert ) clearly distinguishes between “must” and “should”. A breach of those items described as “must” are enforceable with fines. Those described as “should” are guidance and are not enforceable. The travel restrictions are only guidance.

But it appears North Yorkshire Police have decided differently, or at least used the threat of doing so.”

It is clear from Superintendent Walker’s remarks quoted above and in his letter that North Yorkshire Police has not “decided differently” and is acting within the guidelines.

“I am unaware of any cases where anyone who is genuinely exercising and has crossed the border has been arrested or prosecuted. So it seems to me that the police are interpreting the rules in a sensible and tolerant way in terms of the concerns our correspondent has raised.”

That is totally unacceptable in a democratically governed country.

The arrogant approach of North Yorkshire Police, if correctly reported, undermines the rule of law. This is not a trivial issue.

If this were true, then I agree it would not be a trivial issue. In the article, I made the point that exercise is allowed in both Tiers and I remain unaware of any occasion when North Yorkshire Police have enforced the regulations incorrectly or indeed attempted to enforce the guidance. I have not suggested that the Police is declining to prosecute as a concession.

So I can find no substantive basis to Heinrik’s concerns.

Which leads on to the quoted comments of Supt Mike Walker of North Yorkshire Police:

“Those living in tier three areas are advised not to travel out of the area unless it is necessary, such as for work or education. I realise there may be some confusion over what is deemed necessary in these circumstances, so I’d like to be clear here; it is neither necessary or acceptable to leave a tier three area and enter a lower tier area for a day trip or to visit a pub or restaurant for a meal.“

The first sentence is unobjectionable. The second sentence is threatening and implies it is a police decision on what is necessary.

The statement by Supt Mike Walker clearly includes someone from Tier 3 who decides to drive to the North York Moors for a day’s walking over the moors. Or even to Sandsend for a walk on the beach to take the sea air.

Driving from Tier 3 to go walking is obviously unnecessary because there are plenty of areas in Tier 3 you can go walking. However, the statement by Supt Mike Walker clearly does not include someone indulging in this activity because it is permitted in both Tiers. Essentially the same point I made in my article about Roseberry Topping.

Leaving Tier 3 to visit a pub in Tier 2 for a meal is a breach. This BBC article and this statement by North Yorkshire Police give multiple examples of people travelling from Tier 3 to drink in a pub in a Tier 2 area and being fined for it.

I’d also like to draw the attention of readers to this news report (https://www.bbc.co.uk/news/uk-england-york-north-yorkshire-55227317) which includes at the end:

“The force said it also handed out three fixed penalty notices over the weekend to people who visited Whitby from the Cleveland area, breaching their tier three restrictions.“

On what legal basis were these Fixed Penalty Notices issued? What law was being broken by visitors to Whitby who had travelled from Cleveland? Unless the penalty notices were for some offence other than simply a visit to Whitby.

It appears to me anyone paying such a fine has been cheated. Could that be a fraud committed by North Yorkshire Police?”

If someone has travelled to a Tier 2 area from a Tier 3 area and breached the Tier 3 restrictions that remain upon them while they were in in Tier 2 then they are committing an offence and North Yorkshire Police are within the law to prosecute them. So again, I can find no substantive basis to Heinrik’s concerns and it seems to me that there is no basis to allege fraud.

However, time will tell and we will only know when these issues come before the courts.

The NYE will continue to support the efforts of the NHS and North Yorkshire Police to protect the public by:

You can access the Lockdown Rules using the links provided by NYP below.