The Scarborough & Whitby Conservative Association, in response to a complaint from a senior East Riding Tory, has condoned the “Psycho Bitchy” comment made on Twitter by Tory candidate for Hunmanby, Tom Seston.

The comment was made about fellow candidate, Michelle Donohue-Moncrieff who experienced well documented mental health issues and was subsequently fired from the SBC Cabinet by dismal Derek Bastiman.

Cllr Heather Phillips, currently a candidate in Derwent Valley & Moor, previously made the pages of the Enquirer after an investigation into her allowances revealed she had received £1,320.48 for chairing a single meeting of the Standards Committee. Nice work if you can get it!

Please accept my apologies for not replying earlier to you. As you can appreciate this is a very busy time for all our Candidates in the forthcoming Council Election.

Whilst I can appreciate that Tom’s comment is not acceptable I feel it needs to be taken in context. Tom is a relatively inexperienced campaigner and is perhaps more open and expressive on social media than my generation would be.[…]

I have always considered Tom to be a sensible young man and in this instance I would ask that you consider the wider context as he has been constantly harassed on various blogs and Twitter, he was perhaps goaded into over stepping the boundary. As you can appreciate politics is a rather vicious experience at the moment and perhaps consider the provocation that Tom has had to endure.

Seston first made the pages of the Enquirer after praising the driving abilities of Peter Sutcliffe.

Toryboy Tom has also made the pages of Nouse for suggesting the death penalty should be reintroduced in response to Conservative MEP David Campbell Bannerman suggesting that Remainers should be prosecuted under the Treason Act. 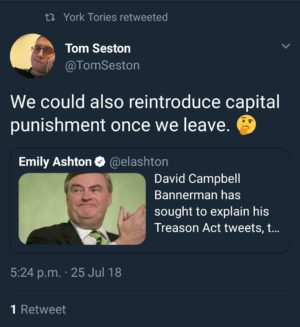 Personally, I was looking forward to the electorate sorting out our Remainer Parliament at the next general election, but it hadn’t crossed my mind a coach convoy to Tyburn would do the same thing.