Readers far and wide have been following the work of NYE investigative journalist Tim THORNE and parking-campaigner Andy STRANGEWAY over recent weeks, exposing the utter incompetence of Council legal departments in overseeing the creation and implementation of parking regulations.

The Enquirer coverage can be found here.

Cutting through the myriad complexities of the regulations and the convoluted process that led to their implementation, the bottom line is that the Controlled Parking Zone (CPZ) regulations in general, having been challenged by Tim THORNE and have been proved flawed to the degree that they are not enforceable because of inappropriate or inadequate signage.

The Adjudicator’s decision can be found here.

Similarly, the prohibition of overnight parking of motorhomes has also been implemented in a manner so slipshod as to invite challenge on a range of grounds.

Frustrated by SBC/NYCC’s refusal to engage in a productive dialogue, Andy STRANGEWAY has now three times held overnight meetings of the ASOP lobby-group (Andy Strangeway Overnight Parking) at so-called prohibited times and locations, in an attempt to force the authorities to admit that their regulations are worthless.

The most recent of these meetings (overnight, Saturday 9th to Sunday 10th January 2016) has aroused much concern at NYCC and SBC, and some mirth, because of the spotlight it shines on County & Borough Councillor Joe “Frank & Honest” PLANT, who was the prime-mover in forcing through the ‘No Overnight Parking’ ban, at the behest of a relatively small number of hoteliers and guesthouse owners along Whitby’s West Cliff, who claimed that motorhomes blocked their sea-views – during the hours of, erm, darkness. 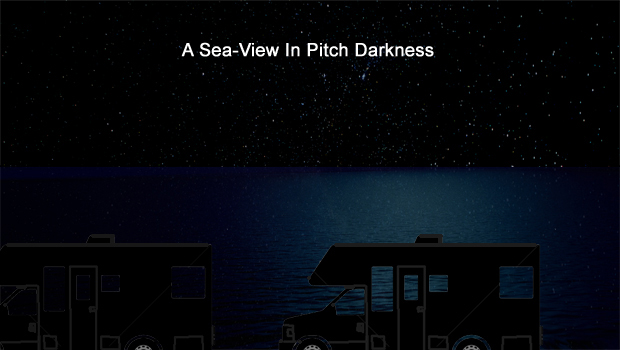 On the morning of Sunday 10th January 2016, Facebook and Google+ users in their thousands were amused by, and vocally supportive of, Andy STRANGEWAY’s novel approach.

Andy had emailed all SBC Councillors individually and even text-messaged Cllr Joe “Frank & Honest” PLANT personally to announce the ASOP presence, inviting the Council to serve Parking Charge Notices (PCNs) on the motorhomers – but no-one from SBC or NYCC had the decency (or the nerve) to show up.

The nearest they came to success was the following less-than-lucid comment from Councillor BACKHOUSE:

Setting aside any grammatical and syntactical discomfort, in plain and truthful language what Councillor BACKHOUSE really means is that both Councils’ legal departments are in a flap. “Things in train” can only mean that necessary revisions of some sort are in progress. So they do know that they have screwed up but, as ever, refuse to admit it.

However, Councillor BACKHOUSE’s statement is somewhat at odds with the statement issued by NYCC to some media outlets (but not the Enquirer – though I did specifically request a comment from NYCC Head of Legal Barry KHAN, and I am disappointed that he has let me down) back on 18th December 2015 – which implies that no change is necessary:

What this statement really means is that NYCC believes the Adjudicator’s Decision may (just conceivably) be open to challenge in Court, but since such a very small proportion of motorists will bother to take their appeals all the way to the Tribunal, the Council can blithely go ahead issuing unenforceable PCNs because, even if the odd one or two motorists’ progress their appeals all the way to the Tribunal and their appeals are upheld by the Adjudicator (as they must be), there is nevertheless a lot of easy money to be made from the huge majority of motorists who will not diligently pursue appeals and simply fork out their hard-earned cash.

In my view, as expressed in my articles about the unenforceable ‘tickets’ in West Yorkshire, both Councils risk committing fraud by false representation:

But SBC rests secure in the knowledge that NYP will never prosecute.

In the following clip (downloaded from the SBC web-cast), we see Councillor Andy BACKHOUSE [Con.] assuring Full Council (and the wider world) that the Council’s regulations have always been upheld when put to the test.

In fact, it is flat-out ‘dissembling’ (see above). It may be true to say that the CPZ regulations have been “upheld at every point” in the past – UNTIL Tim THORNE’s detailed challenge.

It was not upheld on when challenged by Tim THORNE, as the Adjudicator’s Decision Notice makes plain. It was Tim’s appeal that was upheld, not the SBC regs, precisely because the CPZ signage was and is fatally flawed. And, obviously, SBC is aware of this.

Proof? In a letter to the Enquirer‘s Tim THORNE, the Adjudicator states:

Further to your email of 30 December, the Council has stated that they will not be applying for a

review of the Adjudicator’s decision in this case.

Equally obviously, the Adjudicator’s decision will be the same in respect of any other appeals that cite the same grounds as Tim THORNE’s appeal.

To be clear, SBC may conceivably continue to issue PCNs (‘tickets’) – and probably will – but any appeal on the grounds specified by Tim THORNE will always be upheld by the Adjudicator (who is not permitted to produce different decisions for identical circumstances) and SBC is fully aware – and has admitted as much to the Adjudicator – that it will be useless to appeal the Adjudicator’s Decision. QED.

And who wrote Councillor BACKHOUSE’s script?

In my view, until the signage is suitably modified or replaced, or until the Traffic Regulation Orders have been corrected, the entire parking regulations (including those pertinent to motorhomers) are a shambolic mess and a monumental waste of the public purse. So perhaps in 2016-17 the Council may not make a huge (unlawful) PROFIT of £3.5 million from its parking management regime. And will we ever learn how much the process of correcting past cock-ups will cost? Will anyone be held accountable?

Why don’t they simply own up? Why don’t they just say, “We made a pig’s ear of it; we trusted our legal people – who we hired, at great expense – believing them to be sufficiently competent to produce legally valid Traffic Regulation Orders and signage – and the fact is thta they have let us down. Badly. Sorry!”

Yet in response to Councillor Rob BARNETT, the Portfolio Holder for Leisure, Tourism & Culture Councillor Andy BACKHOUSE [Con.] (Lindhead) could only prattle and ‘dissemble’ (see above) – with the sole caveat that it is just possible that he is simply too thick to understand the intricacies of the process. That I could believe.

So can we now expect an apology from Councillor Andy BACKHOUSE for his false statement in the Council Chamber?

I am told by Councillors that only around 60 people view the SBC Full Council web-casts. Most of those are Councillors who rush home to watch themselves ‘starring’ on the box. So the wider public, relying on the Scarborough News and the Whitby Gazette, has little chance to witness either the dishonesty or the puerile jibes about people having “strange ways” of pressing the public interest.

And if BACKHOUSE, BASTIMAN and FOX wish to engage in a ‘cheap jibes contest’ they may meet more than their match. All three have Achilles heels . . .