On 16th May 2017, Scarborough Borough Council published a Report, entitled “Land at Dock End Whitby”, by the Director of Finance and s.151 Officer Nick EDWARDS, conveying the Recommendation that Cabinet Portfolio Holder for Project Leadership, Harbours, Coast and Flood Protection, Councillor Mike COCKERILL [Ind.] approve the Proposal to license the eponymous asset for commercial use.

Before examining the Report, allow me to describe the area under discussion.

With the exception of the Market Place in the old part of Whitby (on the East side), Dock End is the only area of open public space, and the by far the larger of the two, in the centre of a town known for its density of built environment, where open public space is at a premium.

It is located (as the name suggests) on the harbour side, some 100 metres to the south of the famous Swing Bridge, which it overlooks. Looking across the River Esk and to the north-east, a magnificent view of Whitby Abbey and St Mary’s Church dominates the horizon.

To the west of Dock End, we find the Railway Station and the parking area which forms its forecourt. A little further to the west is the Bus Station.

To the south of these is the Co-Op supermarket – the largest retail outlet in the town proper. To the south of the Co-Op stands its own car-park, and beyond that a large Council car-park. Beyond that, the Coach Park, where day-trippers alight and, from late afternoon onwards, re-regroup preparatory to departure.

To the east of Dock End, we find the Endeavour Wharf car-park.

The overwhelming majority of visitors to Whitby pass through Dock End as they arrive and again as they depart.

These things considered, Dock End comprises perhaps the most valuable piece of public space real estate in the County of North Yorkshire – yet Nick EDWARDS intends to rent out to Andrew PERN , for 21 years, somewhere in the order of 40 sq.m. of Dock End as an adjunct to his proposed ‘The Star Inn The Harbour’ restaurant – for “a peppercorn rent”.

If there is a location in North Yorkshire that experiences a greater volume of footfall than Dock End, I cannot imagine where it can be.

It is also the last remaining public space of any size within the town centre and thus has an amenity value beyond any commercial consideration.

Unfortunately, the “attached plan (Appendix 1)”, referred to in the Report, is not included in the following PDF document from the Council’s web-site.

Of particular note is the following Item from the Report:

4.1 The Director (NE) has consulted with Streonshalh Ward Councillors and Whitby Town Council.

Alas, there is no reference in the Report to the outcome of that Consultation. Nor can I locate any evidence to suggest that a public consultation ever took place.

I have perused the Agendas and Minutes of Whitby Town Council (both Full Council and the WTC Harbour Committee). I have not been able to find any reference to the ‘consultation’ referred to by Nick EDWARDS in his Report, with the exception of this (dated 2nd August 2016). 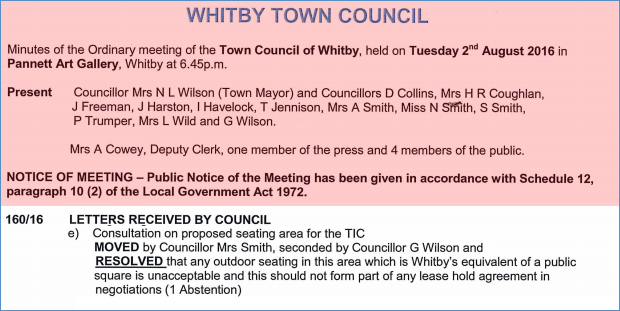 However, I have been able to speak to my Streonshalh ward Councillor – Councillor Rob BARNETT [Lab.] – who was clear in his recollection that he met with Nick EDWARDS and fellow Streonshalh Councillor Sandra TURNER [Con.] last year. Following Councillor TURNER’s early departure for another engagement, Councillor BARNETT accompanied Mr EDWARDS to the site, where Mr EDWARDS paced out the approximate boundary of the proposed area. Councillor BARNETT has explicitly authorised me to report that he made clear to Nick EDWARDS, in no uncertain terms, that as a passionate supporter of public open spaces, he was vigorously opposed to the encroachment into Dock End of any commercial venture.

In the Google Satellite View image (see below), the now-defunct Scoresby Monument has been superseded by the town’s most recent war memorial (pictured above and marked in lime green, below), which occupies a square comprising approximately 20sq.m. situated fairly centrally in the area to the north of the land in question (marked in pink). The area shown in pink approximates the area indicated to Councillor BARNETT by Mr EDWARDS – i.e. approximately 40sq.m., described by the applicant as sufficient to seat 80 diners (at 20 tables).

“It will be a seafood version of the Star Inn the City,” said Andrew. “It will have 160 covers, 80 outside. It is on the harbour side looking up to St Hilda’s Church and Whitby Abbey. You can’t get a more picturesque view than that.”

That telling comment – “It will have 160 covers, 80 outside” – makes Mr EDWARDS’ Recommendation sound like a ‘done deal’. How often that phrase crops up at Scarborough Borough Council.

There can be no denying that this is a significant slice of prime real estate – and all for a peppercorn rent for the next twenty-one years.

No wonder Mr PERN is smiling.

Setting aside (for the moment) the fact that the Director of Finance (Nick EDWARDS) has omitted to mention the strenuous objections of SBC Streonshalh ward Councillor Rob BARNETT [Lab.], and the massed ranks (barring a single abstention) supporting Whitby Town Council’s Resolution that the proposal is “unacceptable”, thereby depriving Portfolio Holder Councillor Mike COCKERILL of the information that the ‘consultation’ elicited (half truths and omissions are standard fare at SBC), let us proceed to examine Nick EDWARD’s Report more carefully.

Take another look at the PDF of Nick EDWARD’s Report, further up this page, giving special attention to the following Articles:

If the licence does not go ahead, the Council may be liable to pay compensation to the tenant to mitigate the tenant’s losses.

How, exactly, “the Council may be liable” to compensate the tenant for his losses is unclear. What losses?

Why are these risks absent from Mr EDWARD’s Risk Matrix? Is the man incompetent? Or biased?

In my view, this Report is merely the latest example in a long series of machinations that remain opaque to the public and largely unknown to Councillors.

Am I suggesting that there has been wrongdoing? No. Not yet. But I would like to see the SBC Overview & Scrutiny Board take a very close look.

Am I suggesting that the prudence of the Council, as it relates to such concepts as “value for money” and “openness and transparency” is open to question? Yes. Always.

On past form, what remains lacking is Councillors with enough grasp and courage to challenge Council chicanery, wherever and whenever it arises.