Some readers may be aware that, since 9th March 2021, I have been subjected to a sustained campaign of false allegations on social media posts, apparently mistaking me for the author of a reader’s Letter to the Editor of the North Yorks Enquirer.

Regular readers will be aware that when I write about allegations of breaches of criminal and/or civil law, the veracity of my reports can be relied upon because they are, and have always been, well-documented and fully evidenced.

It is not my place to defend the assertions of other contributors to the North Yorks Enquirer. In the present case, however, I have been falsely accused of circulating untruths. Consequently, I wish to correct a large number of malicious and harassing statements that have been spewed all over social media, in consequence of which I believe that I and my family have been placed at risk of violence.

Let me make absolutely and unequivocally clear that:

1) Contrary to these false allegations, I am not the author of the Letter to the Editor published on the North Yorks Enquirer on Monday 8th March 2021.

2) Contrary to these false allegations, I am not the editor/webmaster/owner of the North Yorks Enquirer.

3) Contrary to these false allegations, I have never been convicted of, or had a Judgment handed down against me for, any criminal or civil offence of harassment, malicious communications or the like.

4) Contrary to these false allegations, I am not a racist, nor does there exist any credible evidence that I am.

5) Contrary to these false allegations, I am not a misogynist, nor does there exist any credible evidence that I am; a large proportion of my closest friends and followers are women.

6) Contrary to these false allegations, I am not an extremist, either right or left, and my publications confirm that I am apolitical. I am strongly opposed to party politics at local level and strive to expose wrongdoing under whatever political flag it shows its colours.

7) Contrary to these false allegations, I am not and have never claimed to be a ‘super-sleuth’ (whatever that may be). I am, however, diligent in my research – especially if I have reason to believe that there has been abuse of the public purse.

8) Contrary to these false allegations, I have stated nothing, online or in correspondence, to the effect that “Tomorrow’s Ghosts” or Absinthe Promotions Ltd (APL) has submitted a questionable grant application to the Arts Council, though I do believe that there is persuasive evidence that such may be the case.

9) Contrary to these false allegations, I have not, at any time, crept around a certain Mrs Kirstin LAVENDER’s property in West Yorkshire “at 5:30 in the morning taking photos”.

10) Contrary to these false allegations, I have not, at any time, taken or posted photographs of the daughter of the sole director of Absinthe Promotions Ltd “unwrapping a Christmas present on Christmas Eve”.

11) Contrary to these false allegations, I am not a ‘conspiracy theorist’. Neither have I, nor any other North Yorks Enquirer contributor, ever published anything on the subject of “aliens”. A simple site search confirms this:

Each and every one of these preposterous and widely-disseminated slurs and allegations against me is FALSE and, frankly, ludicrous.

What I have done is investigate for myself the information provided in the above-mentioned reader’s Letter to the Editor.

I here set out my findings, thus:

A) I have established the authenticity of the Freedom of Information response from the Arts Council linked in the reader’s Letter to the Editor, which confirms that Absinthe Promotions Ltd was awarded grant funding in the sum of £55,000.

B) I have established that the sole director of Absinthe Promotions Ltd (APL) is recorded at Companies House as Kirstin Roma LAVENDER (48). I have also established that Kirstin Roma LAVENDER has operated under a variety of other names or aliases, including: Kirstin Isabella Lavender; Kirstin McLaughlin; Kirstin Isolde Lavender, etc (for what purposes I cannot know). The Collins Dictionary defines “alias” as “a false name, especially one used by a criminal”. Be it noted that the only questionable aspect to using an alias is doing so in a business or legal context to commit a fraud while using a false name, or to evade identification by law enforcement agencies.

C) I have established that the Sophie Lancaster Foundation (cited within the APL Arts Council grant application form) is indeed an anti-bullying, anti-violence Registered Charity (Charity number: 1129689), whose objectives are not reflected in the many Tweets linked in the reader’s Letter. In fact, the reader is correct in stating that the objectives of the Sophie Lancaster Foundation are: “to stamp out prejudice, hatred  and intolerance everywhere, focussing on respect and understanding for subcultures in our communities”. I find it noteworthy that, on 9th March 2021 (one day after the publication of the reader’s Letter to the Editor, those foul-mouthed and deeply offensive Tweets on the Absinthe Promotions Ltd Twitter account, some of which condone or encourage violence, were deleted, either by Mrs LAVENDER or by another, on her behalf. But readers may judge the general tenor of Mrs LAVENDER’s Tweets for themselves (all profanities redacted): 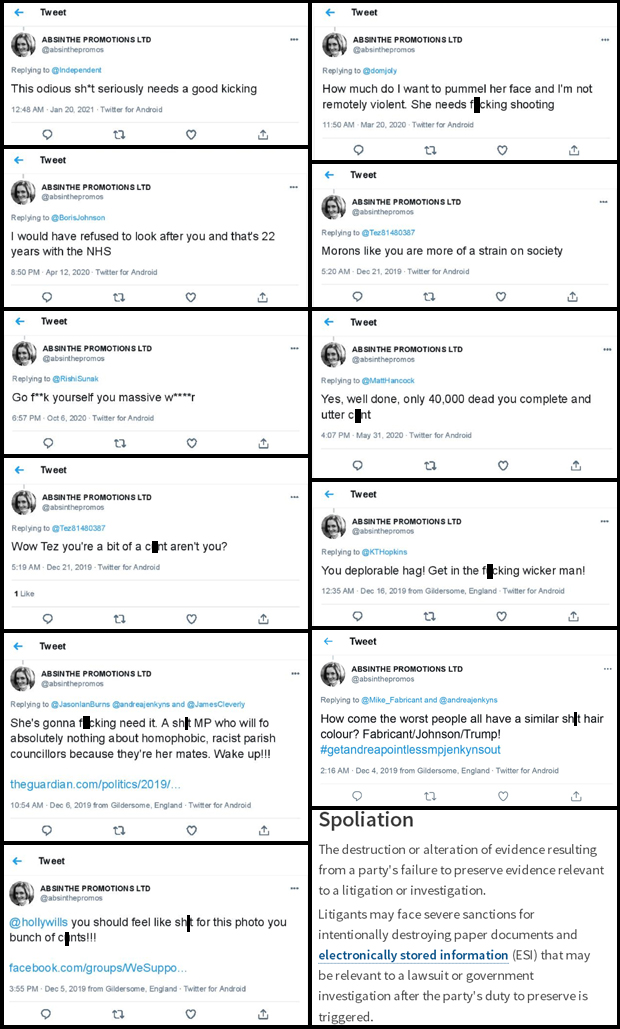 Several of these Tweets risk classification as ‘hate’ crime.

D) I have established that the URL-links to the newspaper articles featured in the reader’s Letter to the Editor do indeed plot the decline and demise of Sheffield International Venues (SIV) during the period leading up to Kirstin Roma LAVENDER‘s grant application to the Arts Council – a fact which she must (or should) have known. Thus, reference in the grant application to the effect that “SIV guaranteed subsidised use of the multi-functional venue (music arena, exhibition, theatre, cinema) and ticketing with advancement of ticket revenue to ensure meet cashflow” is, in my view, misleading, at the very least.

Nevertheless, it is my lay opinion that this representation may breach the terms of s.2 of the Fraud Act 2006:

E) I have established that the Whitby Goth Weekend (WGW) began in Whitby 27 years ago, in 1994, and became a bi-annual event in 1997. Conversely, Absinthe Promotions Ltd was incorporated on 22nd June 2018, less than 3 years ago. Thus, any reference to a quarter-century of provenance is also misleading. Incidentally, Kirstin Roma LAVENDER‘s allegations that the reader’s Letter to the Editor disclosed the address of her family home (allegedly putting her daughter at risk) are negated by the fact that the address disclosed (by the Arts Council, in its FOIA response disclosing the grant application) is actually that of Absinthe Promotions Ltd‘s accountants, Lima Accountancy Services at 132 Street, Gildersome, Leeds LS27 7JB – and not Kirstin Roma LAVENDER‘s home address.

F) I have established that all of the material included in the reader’s Letter to the Editor is (and, at the time of publication, was) available in the public domain.

In summary, I have established that the content of the reader’s Letter to the Editor is factually accurate in every substantive detail. I do not intend to reproduce libellous comments made against me by Mrs LAVENDER/APL here.

Readers who remain in any doubt to whether or not Kirstin Roma LAVENDER‘s slurs against me on social media contain any substantive element of truth are invited to subject the reader’s Letter to the Editor to their own diligent scrutiny.

They will find, as I believe I have found, that the reader’s Letter to the Editor raises worthy questions, presents accurate observations, provides irrefutable source material – but does NOT make any allegations whatsoever.

I therefore believe that Kirstin Roma LAVENDER‘s slurs against me do not make any attempt to address the substantive issues raised in the reader’s Letter to the Editor and may thus be seen to constitute nothing more than malicious communications, possibly amounting to ‘hate’ crime.

Given the seriousness of the above offences, why is Mrs LAVENDER evincing what to me resembles consciousness of guilt? As with the apparent  spoliation of evidence in the case of those inexcusable Tweets, is it simply the case that a guilty conscience has fuelled a frantic knee-jerk response? I believe so.

The only plausible mitigation appears to lie in the information passed to me to the effect that Mrs LAVENDER has been abetted in her campaign by a quasi ‘friend’ whose identity is now known to me.

I am now informed that a number of Mrs LAVENDER’s postings were rendered temporarily invisible when she suspended her Facebook account, though she has subsequently re-instated that account, thus rendering them once again visible. Alas for Mrs LAVENDER, many  of them have been screenshot and retained in evidence. I am also informed that many of the same postings have throughout been displayed on the Absinthe Promotions Facebook presence and remain so at the time of writing.

I am in no doubt that Mrs LAVENDER, in her desperation, has drawn down considerable embarrassment on herself and her “Tomorrow’s Ghosts’” event, as well as the Sophie Lancaster Foundation, Lima Accountancy Services, the Arts Council and Scarborough Borough Council (which now administers the Whitby Spa/Pavilion complex) and some or all of these may no longer wish to continue in association with APL).

Having now published this comprehensive Rebuttal, I do not intend to dignify Mrs LAVENDER’s ravings with further comment.

I hope that Mrs LAVENDER will now have the common decency to admit her error and provide, for publication, an exhaustive and humble apology to letters@nyenquirer.uk. I doubt that she will. 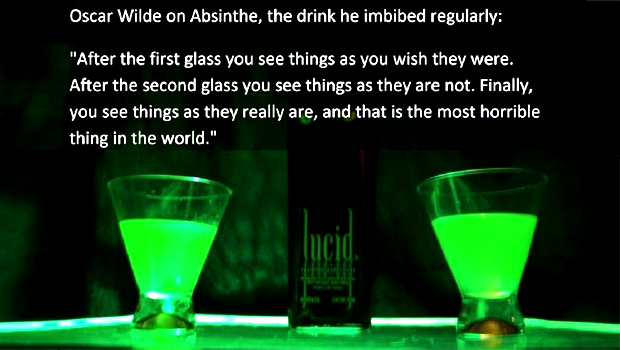 There is no legislation prohibiting stupidity; nor does stupidity engage a defence to any of the above offences.