In the run-up to the Tour de Yorkshire 2015 (TdY15), certain residents in the District of Ryedale and the Borough of Scarborough took the opportunity to bring pressure upon the Highways Department of North Yorkshire County Council (NYCC) to effect long-needed repairs to key pot-hole ridden roads in their respective localities, on the grounds of the serous danger to the TdY15 competitors that pot-holes represent.

In regard to Church Street, Norton, NYCC Area Highways Manager Richard MARR was swift to point out that resurfacing had already been scheduled for the 2016/17 financial year and no special measures were to be implemented for the TdY15.

As the race days approached (29/30th April & 1st May 2015), however, a somewhat different concern surfaced – Whitby residents reported that some of the main roads on the race route were being stripped of cat’s-eyes.

The fear was that the cat’s-eyes were being removed solely to provide a smoother surface for the race competitors – at great risk to the safety of general road-users who rely on the cat’s-eyes on rural stretches where there is no street-lighting and frequent sea-frets and foggy conditions severely limit visibility. Two of these stretches were on the A169 and the A171 close to Whitby.

Some were concerned about a lack of information regarding how long the cat’s-eyes were to be absent. Clearly the stretches of road in question must have been, at some time in the past, been deemed to be in need of cat’s-eyes for the obvious safety reasons.

The answer was, approximately three weeks. This seemed to suggest that the safety requirements that had previously necessitated the deployment of cat’s-eyes were being suspended. It remained a matter of conjecture whether or not the timing of the removal of the cat’s-eyes just prior to the TdY15 and the mooted advantage that this conferred on competitors in the race were directly related.

Nevertheless, three weeks seemed a long time in which other road-users should be put at risk due to the absence of the cat’s-eyes – TdY15 or not.

Road safety issues in North Yorkshire are promoted by Road Wise, whose Mission Statement assures us that:

Road Wise is NYCC’s Road Safety Partnership, along with 95 Alive York, operating out of County Hall at Northallerton. Perhaps Richard MARR should pop round there for a chat one day.

When Andy STRANGEWAY queried the 2/3-week timescale, he received the following response:

The consensus amongst whom? And quite how this was intended to justify the lengthy lapse in safety provision remained unclear. It also conflicted with information provided by other Councils and contractors.

Even if the contractors made good on their “aiming to be” estimate, this still meant that cat’s-eyes safety provision would lapse for two to three weeks, putting night-time traffic at previously acknowledged risk.

So Andy STRANGEWAY responded to Highways via their Improvement Manager, Helen WATSON, as follows:

Following on from our discussion yesterday these are the points raised:

Do the Highways Agency remove the Cats Eyes on the A1 for two to three weeks and longer?

NYCC MUST report this “evidence” to the HSE for them to investigate.

I request to be copied into all communication between NYCC and HSE on this matter.

The reader will have gathered that Andy STRANGEWAY remained skeptical about Highways’ assertion that 2-3 weeks was normal within the industry. This was because NYCC could provide no evidence at all that the timescale fell within accepted industry standards – other than a rash statement to that effect from Highways. They could have made it up.

So Andy submitted a Subject Access Request (SAR) for all data held by NYCC that related to him and his communications with the Council.

Amongst the bundle of documents provided by NYCC was this astonishing email from Area Highways Manager Richard MARR to Ringway Infrastructure Services Ltd: 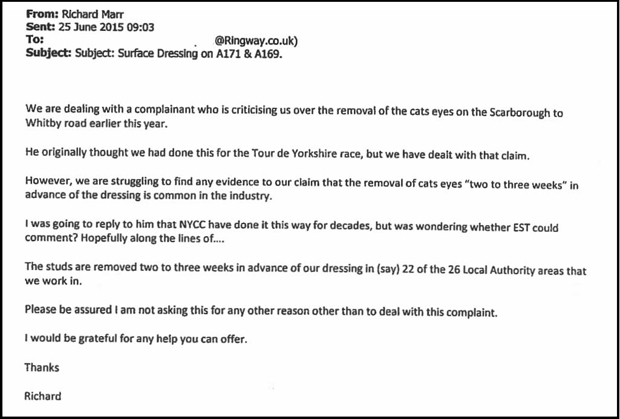 In my view, this was a corrupt act within the terms of the Transparency International definition:

For the avoidance of doubt, the “private gain” to Richard MARR is to avoid being proven a liar, with all the concomitant career advantages that that would entail.

The “abuse of entrusted power” element is self-evident.

Andy STRANGEWAY has made the following observations:

In Andy’s view, the foregoing raises a series of very disturbing questions:

On this basis, Andy STRANGEWAY has lodged a Formal Complaint against Richard MARR:

Could I please refer you to https://andystrangeway.wordpress.com/2015/11/20/nycc-officer-corrupt/.

I would like to register a formal complaint about Richard Marr and NYCC for his/their dishonesty to me and his/their attempt to be further dishonest to me.

In addition, I believe NYCC must undertake an investigation into all the contracts Richard Marr has been involved in.

Finally, I would like to be informed why the Cats Eyes were taken up such a long time in advance of the road being repaired.

The outcome of the Formal Complaint will be reported on the North Yorks Enquirer. 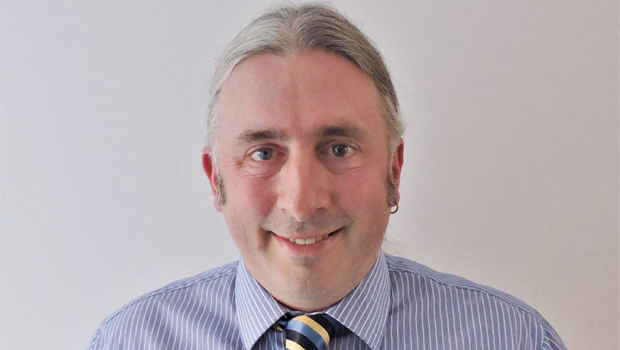