Further to our report earlier in the week (in which Scarborough & Whitby MP Robert GOODWILL’s letter to Sec. of State Robert JENRICK was reproduced in full), it now transpires that Mr GOODWILL has ‘upped the ante’ by following up on his letter attaching further information. 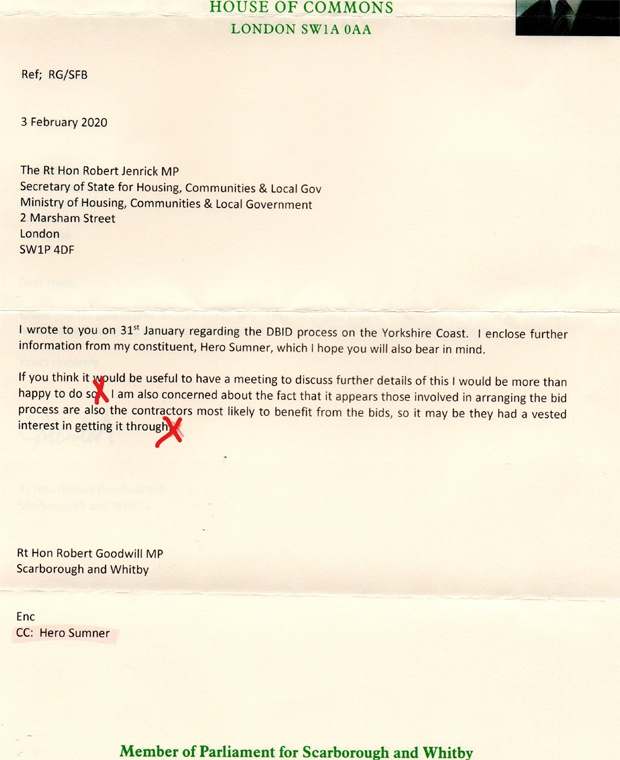 Of particular interest is the sentence between the two red crosses:

“I am also concerned about the fact that it appears those involved in arranging the bid process are also the contractors most likely to benefit from the bids, so it may be they had a vested interest in getting it through”.

This alone is incendiary. As an experienced parliamentarian, Mr GOODWILL will be acutely aware that he better have some very strong indication (do I mean ‘evidence’?) to support his ‘concerns’. He is, after all, not speaking with the benefit of parliamentary privilege.

Readers may find it rewarding to contemplate to whom Mr GOODWILL is referring when he employs the phrase “those involved in arranging the bid process” – could that be the recently departed Returning Officer and former CEO of Scarborough Borough Council, Mr Jim DILLON?

Or could he be referring to Scarborough Borough Council – the body corporate – collectively, so to say?

Speculation is not yet prohibited in this country – even if public comment carries an element of risk.

One way or another, it would be reasonable to conclude that Mr GOODWILL believes he may have picked up the sickly scent of corruption.

He is welcome to approach the Enquirer – in strictest confidence, of course.

Mr Peter STANYON (CEO of the Association of Electoral Administrators) had earlier declared that today, Thursday 6th February 2020, would be the closing-date for the submission of evidence relevant to his investigation into SBC’s involvement in the ballot process underpinning the YCBID. Now, Mr GOODWILL would appear to have planted a foot in the doorway. Time will tell . . .