Local man Daniel Dobbs from Malton, North Yorkshire (pictured above), has been arrested, extradited from Spain and convicted of escaping from custody in the UK, following a successful joint operation between the UK’s National Crime Agency and the Spanish Guardia Civil.

Dobbs was convicted of running a drugs factory in Doncaster South Yorkshire and absconded from Hatfield Lakes Open Prison in South Yorkshire on the 2nd of November 2018. He had been on the run since then until his arrest in Spain in February this year.

According to a National Crime Agency press release very kindly provided to the NYE:

A convicted drug smuggler who went on the run after absconding from prison has now been jailed for a total of 16 and a half years.

Daniel Dobbs, 31, was convicted of trafficking heroin and amphetamines and sentenced to 13 and a half years’ imprisonment in January 2014, following a National Crime Agency investigation.

On 2 November 2018, Dobbs, from Malton in North Yorkshire and known as “Dobbo” to his friends, was found to be missing from his prison cell in South Yorkshire.

The NCA subsequently issued a wanted appeal for information on his whereabouts. 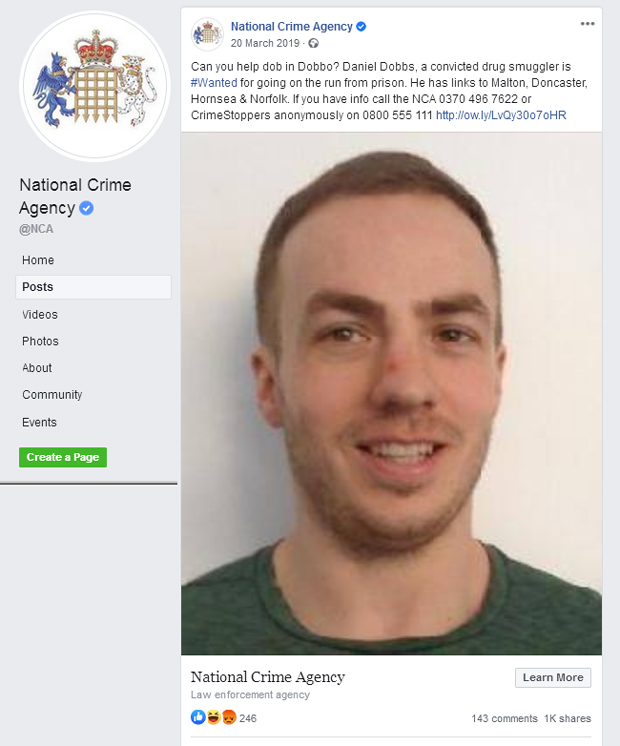 Last year, the NCA identified him as living in Spain under a false name and on 11 February 2020, after co-operation with Spanish law enforcement partners, Dobbs was arrested in a Guardia Civil investigation into an underground tobacco factory in Malaga, southern Spain. 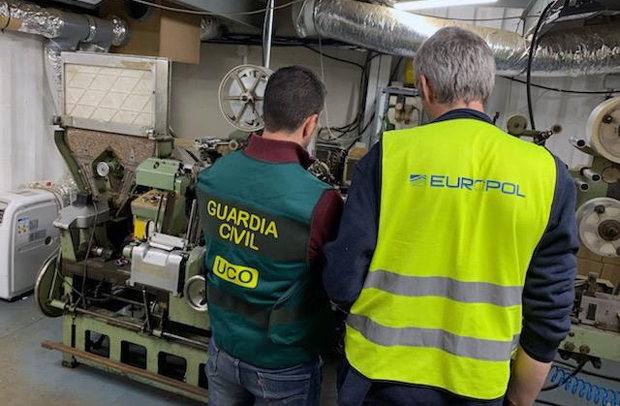 Dobbs was returned to the UK in March 2020 and on 21 July, was sentenced to 24 months in prison for escape from lawful custody, and 12 months concurrently for improper use of an identity document at Lewes Crown Court.

These will run consecutively with the remainder of his 13 and a half year sentence.

“It is apparent that Dobbs is a harmful and persistent offender who thought he could escape the UK and avoid detection. But together with international partners, we tracked him down, and now he’s back behind bars where he belongs.”

“The NCA pursues fugitives relentlessly. No matter where they are, nor how long it takes, we will catch up with those who flee UK justice.”

Dobbs arrested as part of a major Pan-European operation

Dobbs was arrested as part of a large and complex investigation into an international criminal group by the NCA, Guardia Civil, Lithuanian Customs Criminal Service and the Polish Police Central Bureau of Investigation. The operation also discovered a cannabis plantation. Europol facilitated the information exchange between the participating countries, provided coordination support and analysed operational information against Europol’s databases to give leads to investigators. Europol also provided on-the-spot operational support by deploying two analysts to Malaga, Spain, to provide real-time analytical support. According to a statement from Europol provided to the NYE:

The operation uncovered a full range of production facilities operated by the criminal group. Law enforcement authorities raided the primary production facility where the raw tobacco was cut and prepared for the second production phase. The Spanish law enforcement officers uncovered the manufacturing facility hidden in a bunker four metres underground. In the facility, believed to have been operating since 2019, workers made and packed counterfeit cigarettes; a complete production line under one roof. Beds and living quarters for the workers were also found underground.

This is the first underground factory to be discovered in the EU. Workers there were forced to work in extremely dangerous and toxic conditions. Locked up four metres underground, they were not allowed to leave the facility on their own, and no emergency security was in place.

A cannabis plantation was also discovered.During the raids, law enforcement officers searched 13 locations and arrested 20 people, suspected of being members of the criminal group. One of them is believed to be the leader of the organisation. [According to local media in Malaga, this is a reference to Dobbs] The production line and the criminal group has been dismantled.

The cigarettes were made in unsanitary conditions and of low-quality components. The criminal group distributed the cigarettes on the European black market, estimated to represent about 46.3 billion cigarettes in 2018.

The local media report above states that when the Guardia Civil Rapid Action Group breached the door of his apartment, Dobbs tried to escape along a very narrow ledge past three apartments and then climbed down six floors using a drainpipe. He was nevertheless spotted by the Guardia Civil and arrested.

Six men worked in the underground cigarette factory. They were incarcerated in a soundproofed underground bunker (with air provided by a diesel generator) which contained the cigarette manufacturing machines. The generator was not refuelled because the gang members were all under arrest and the six workers nearly suffocated. None of the men in custody revealed the location of the underground bunker, or that the men inside were in danger of dying if they were not released. In short, they were prepared for all six men to die, rather than incriminate themselves by revealing the location of the cigarette factory.

The entrance was well concealed, but fortunately the Guardia Civil search team found it, entered the factory and released the six men there. Otherwise, there is little doubt that had the Guardia Civil not found the bunker, they would all have been asphyxiated.

The wider implications for policing in North Yorkshire

Extradition arrangements between the UK and Spain were suspended in 1978 because of the dispute over Gibraltar. Some very famous British criminals fled to Malaga because of the climate, immunity from extradition and the opportunity to launder their ill-gotten gains in clubs and property there. These included Great Train Robber Charlie Wilson, who was assassinated on his doorstep in Marbella in 1990, Ronnie Knight, his brother John Knight and Kray Associate and underworld hitman Freddie Foreman, known in the trade as “Brown Bread Fred”*. Consequently the “Costa del Sol” was notorious and became known as the “Costa del Crime”.

This excellent documentary describes how British criminals were able to escape justice. It also shows how Scotland Yard detectives skilfully used the media to confront this issue.

An extradition treaty was signed in 1985, when Spain joined the EU. However, this only applied to offences after 1985. This documentary describes how the UK police were unable to go after criminals that had arrived before 1985 because of a lack of support from the Spanish Police. Spanish attitudes changed when exiled British criminals became involved in the drug trade and caused a problem of rising crime in Spain. They were then arrested in Spain or deported.

Again the role of the local Spanish media was important in mobilising public opinion. They focussed on Freddie Foreman. The failure of the authorities to deal with him became embarrassing to the police and eventually he was kidnapped by the Guardia Civil, sedated and put on a plane for the UK. Scotland Yard were not informed by the Spanish authorities that Foreman was on route. They found out from a journalist. The Spanish High Court later ruled that his arrest and deportation were illegal. But by that time he had been convicted of handling the money stolen in the famous Security Express robbery.

What has changed for policing n North Yorkshire is that as a result of the vast profits to be made from the drugs trade and illegal tobacco, first tier criminals now exist across the UK, not just in London. County forces like North Yorkshire Police now have to deal with this level of sophisticated criminal. Dobbs is a typical example. He was able to:

It appears from this operation that there is close co-operation between the UK and Spanish Police. This is to be applauded.

During the leave campaign it was asserted that leaving the EU would damage international police cooperation. This Guardian article from February 2020 covers the withdrawal of the UK from the European Arrest Warrant scheme, which only applies to EU states. The Government’s position was:

“The agreement should instead provide for fast-track extradition arrangements, based on the EU’s surrender agreement with Norway and Iceland which came into force in 2019, but with appropriate further safeguards for individuals beyond those in the European arrest warrant.”

The article goes on to state that:

“Lawmakers have previously warned that any delay in agreeing an extradition treaty could result in a return to criminals hiding out on the “Costa del Crime” to escape justice. The EU extradition treaty with Norway and Iceland took 13 years to enforce after it was signed in 2006, although both sides will want a post-Brexit agreement in place much faster.”

Britain has left the EU, but this does not appear to have prevented effective cross border cooperation between the UK police and their European counterparts. Obviously this is in the best interests of the police in the UK and the EU. Hence I suspect the reason that it has continued despite BREXIT.

Note from the editor on linguistics

*Amongst Tim’s many dysfunctional qualities one stands out. He is from London, not Yorkshire. In Cockney rhyming slang, “Brown Bread” means “Dead” – Editor.