Labour election leaflets dropping on door mats across Scarborough and Whitby are emblazoned with an image of Borough Councillor, Theresa Norton. Eco-loon Norton is serving time at Her Majesty’s pleasure for her part in blocking roads as part of the Insulate Britain campaign. Whilst nutty Norton glued herself to roads (which resulted in at least one death) the national Labour Party are trying to position themselves as the party of law and order.

Scarborough’s Socialist supremo, Steve ‘Chairman’ Siddons, steadfastly refuses to remove jailbird Norton from the Labour group on the council as it may spell the end of his leadership of the council and more importantly for Chairman Siddons, his allowance will drop from £16,818 per annum to £6,306. 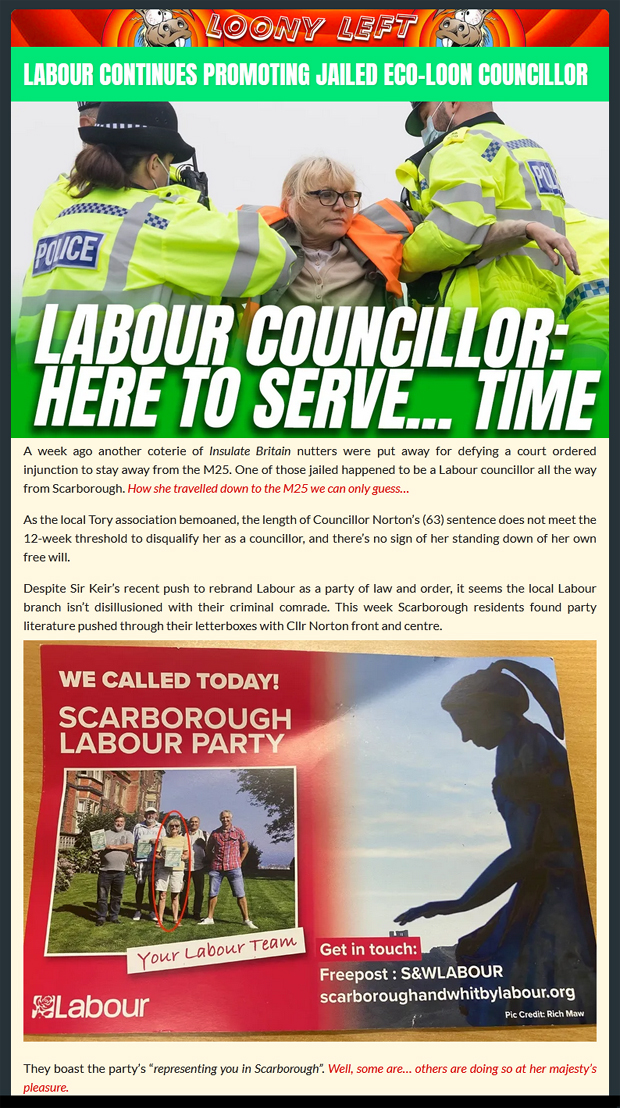 Failed Labour Parliamentary candidate and current Borough and County councillor Eric Broadbent also features on the image. Broadbent, who was one of a number of Labour and Conservative councillors who did a deal and voted to bestow the title of Alderman on known paedophile and ex-Conservative Mayor Peter Jaconelli in return for titles for former Labour councillors.

As you can imagine the Norton situation and its close proximity to local elections caused the other half of the parasitocracy, the Conservative Party, to make a few noises in an attempt to rustle up some votes for May.

Good luck with that one, chaps. Looking the other way while one of your local politicians raped his way around Scarborough coupled with out of control immigration, steadily increasing crime and a national government responsible for more deaths than the Luftwaffe won’t win you many friends at the ballot box.