Fearnley replaces 2017 candidate Eric Broadband after the local party decided to reboot due to intermittent voter connection problems and slow speeds after the Momentum virus took hold. Did Broadbent vote for Jaconelli?

Lavery was first elected in 2010. Lavery was also the General Secretary of the 10 man Northumberland Area National Union of Mineworkers. The post of General Secretary was removed after Lavery took up the position of MP. With regard to the redundant post, undocumented termination payments totaling £89,887.83 were made to Lavery. There was no evidence that any redundancy process had taken place.

For The Few, Not The Many.

Lavery has previously been convicted of a charge of football hooliganism, arrested a number of times during the Miner’s Strike and caused further controversy when posing for photos with his son who had a blacked up face.

The Parliamentary Commissioner for Standards forced Lavery to apologise to the House of Commons after failing to declare the fact that the Northumberland Area National Union of Miners  owned 15 per cent of his property. 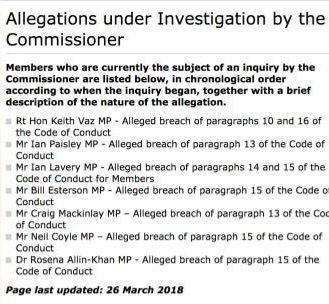 If you want to look at which MPs are under investigation by the Parliamentary Commissioner for Standards you can no longer do so as the swamp dwellers just voted to hide that information from you.