Now fresh allegations – and an apology

That was bad enough.

But NYE readers will have been shocked to read in the BBC article here, that two more employees have made bullying allegations against North Yorkshire’s Police & Crime Commissioner Julia Mulligan.

Bullying is a form of harassment, as described in this North Yorkshire Police statement on bullying

Mrs Mulligan has committed this type of misconduct against employees of the OPCC while she was serving as a senior public official charged with oversight of the police. This will have had a seriously damaging impact on the efficient operation of the OPCC.

Following the news that more victims have come forward, incredibly Mrs Mulligan stopped denying the allegations, did a U-turn and issued an apology, saying she was “very concerned and truly sorry that anything I may have said or done could be perceived in the way described by the complainant“.

The original investigation conducted by the North Yorkshire Police & Crime Panel found that Mrs Mulligan was guilty of bullying a member of the Office of Police & Crime Commissioner’s staff, but was not guilty of harassment. Following correspondence with the author, the NYPCP admitted that it had only considered the allegations of harassment in the context of the Equality Act 2010, not the Protection from Harassment Act 1997.

The Equality Act only considers a very restricted range of criteria to establish an offence of harassment. It applies only to discrimination on the basis of protected characteristics of age, disability, gender reassignment, race, religion or belief, sex and sexual orientation. None of these terms are mentioned in the report by the Police & Crime Panel and it appears from the report that Mrs Mullligan was not accused of this type of discriminatory behavior. Given that none of these situations apply, the author pointed out to the NYPCP that:

A spokesperson for the Police & Crime Panel responded:

“In line with the investigation which referred to definitions described in the Office of the PCC’s policy on bullying and harassment, the Panel is happy that it considered the relevant definitions. The complaints had regard to ex-employees who had made complaints about alleged behaviour at work. The complainants didn’t specifically refer to alleged criminal behaviour under the Protection from Harassment Act or otherwise.”

The complainants may not have specifically alleged criminal behaviour, but of course that does not exonerate the NYPCP from considering if harassment within the meaning of the Protection from Harassment Act had occurred. This appears to have been conveniently overlooked.

The code can be accessed here. It is very clear in its prohibition of bullying.

I understand that, having been found guilty of misconduct, Mrs Mulligan did not voluntarily refer herself to Conservative Party Headquarters, although that was her duty.

Mrs Mulligan has confirmed to me that she will not resign.

The implication being that Mrs Mulligan is to undergo investigation by Conservative Party Headquarters for contravening the Conservative Party Code of Conduct on bullying and not keeping the party fully informed of the findings against her.

(photographed at her Headquarters with the Commissioner for Victims)

In summary, Commissioner Mulligan’s response has been typical for a PR wonk that is also a politician. First: admit nothing; second: deny everything; third: denigrate your victims; fourth: pour scorn on the body and the process that properly upheld the multiple complaints against you; fifth: continue to deny; six: indulge in media manipulation by only releasing your own version of events on the website, making no attempt to give a balanced overview, then seven: conduct an internal cover-up by concealing the evidence from Conservative Party Headquarters, to evade any more embarrassing questions.

Then, when further complaints come to light, no doubt realising that with six members of staff/former members of staff out of fourteen employees (43%) in the OPCC complaining about her bullying, Mrs Mulligan worked out that she is caught bang-to-rights and further denial is not going to work. So,eight: she seamlessly changed tactics, did a U-turn and issued a mealy-mouthed apology about the “perception” of her behaviour, which does not admit any liability – presumably in the hope that this will all go away.

Commissioner Mulligan has been censured for a very serious act of misconduct. Her behaviour appears ingrained, repetitive and characterised by a failure to recognise any fault in herself. It appears to me from this she will find it impossible to reform.

This has an impact on the credibility and reputation of North Yorkshire Police and its operational effectiveness.

Returning to the above police statement on bullying and harassment, how can a Constable credibly arrest a man-in-the-street for harassment or bullying, when the Police & Crime Commissioner routinely indulges in similar behaviour, which the police do not investigate and goes unpunished? 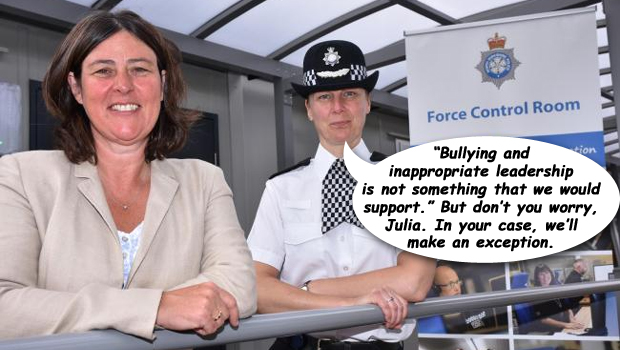 This photoon is not in any way a reflection on Chief Constable Winward. It merely shows that North Yorkshire Police has become

a subject of ridicule because of the actions of Police & Crime Commissioner Julia Mulligan (Conservative).

In my opinion, this, together with the effect her antics will have had on the efficient operation of her office, means that, in the best interests of the force, Mrs Mulligan should go.

Under normal circumstances, when a senior manager had been found guilty of multiple counts of bullying against his or her staff, they would be summarily dismissed for gross misconduct. This is particularly true, given that six employees or former employees have now alleged that Mrs Mulligan indulges in bullying behavior. It appears to me that Mrs Mulligan has also undermined the effective operating of her office. She may also have opened up the OPCC to legal action and a claim for damages.

Yet – incredibly – only minor administrative action has been taken against her.

Pardon me a cynical aside, but do I detect the sound of the wagons forming into a circle around Julia? [Definition: Refers to the American Indian Wars when, at the end of the day, the pioneers wagons would be put into a circle, to form a defensive position to repel Indian attack. Now used in slang to mean preparing for an all-out defensive action]. 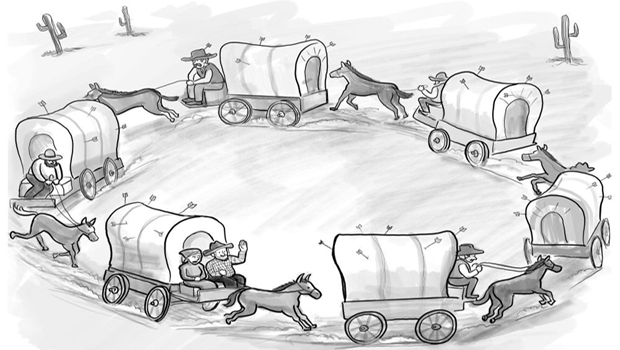 In my opinion, North Yorkshire Police does not need to be further embarrassed by a lame duck Police & Crime Commissioner. If she won’t resign then she should be sacked.

The NYE will continue to cover this story.