On the 6th of May, elections will be held to determine who will be the next Police Fire and Crime Commissioner (PFCC) for North Yorkshire.

The NYE will therefore be running an Election Special consisting of a series of articles covering the election. This will include analysis of the role of a PFCC, the background to the election, an assessment of the current incumbent PFCC Julia Mulligan (pictured above) of the Conservative Party, interviews with all the candidates and coverage of election issues as they arise.

Police & Crime Commissioners (PCCs) are elected officials who were first introduced in 2012. PCCs were elected for the second time on the 5th of May 2016. Every police force has a PCC, except Greater Manchester and London, where PCC responsibilities lie with the Mayor.

The Policing & Crime Act 2017 allowed PCCs to take on responsibility for Fire & Rescue governance. Under this legislation PCCs could consult the public and submit a business case to the Home Secretary seeking to replace the Fire and Rescue Authority in their area, which would change the PCC into a Police, Fire & Crime Commissioner (PFCC).

Introduction: What is a PFCC and what does it do?

PFCCs aim to cut crime and deliver an effective and efficient police service within their force area.

PFCCs have been elected by the public to hold Chief Constables and the force to account; effectively making the police answerable to the communities they serve.

The duties of a PFCC are nicely summarised in the diagram below. 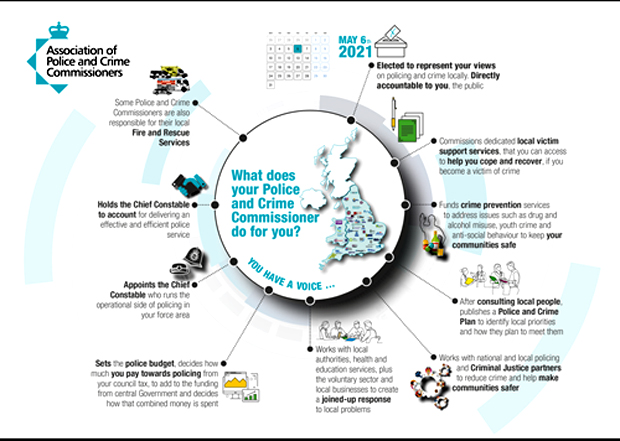 The PFCC is supported by an extensive staff that makes up the Office of the Police and Crime Commissioner (OPFCC). According to the diagram below, this consists of twenty eight roles, of which two are statutory officers, which are shown in the diagram below, taken from the PFCCs website on the 7th of April 2021. 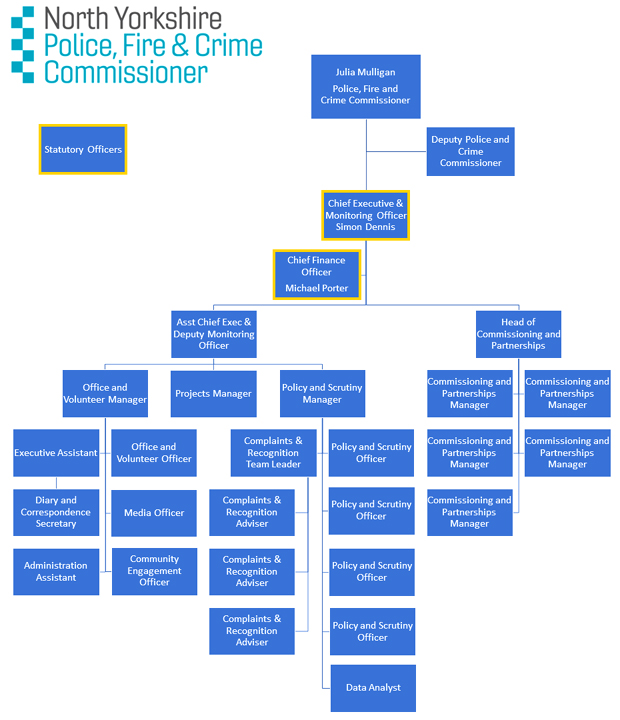 Indicating there are twenty-two employees currently in post, not the twenty-five disclosed, or the twenty-eight that are authorised

In summary, analysis of the website to identify what everyone does and how many of them there are has proven to be impossible. I have therefore been unable to determine what the authorised headcount is, whether it is twenty eight or twenty nine, how many of the above roles are statutory roles whether it is one or two or five, or how many people there are in the OPFCC, whether it is 22, 25, 28, 29 or more.

I have written to PFCC Mulligan asking her to ensure the website is corrected, so it does not mislead the public during the election.

The North Yorkshire Police Fire & Crime Panel (PCP) is supposed to scrutinise and support the work of the PFCC and can require the PFCC to appear before it to answer their questions.

The PCP is required to support the PFCC and provide a check and balance in relation to the performance of the PFCC.

The PCP does not scrutinise the Chief Constable – it scrutinises the PFCC’s exercise of their statutory functions.

While the PCP has a role in challenging the PFCC, it must also exercise its functions with a view to supporting the effective exercise of the PFCC’s functions.

The Policing Protocol goes on to provide a list of the main functions and powers of the PCP, the most important of which are:

The accountability of the Chief Constable remains firmly to the PFCC and not to the PCP.

Councillor Les has very helpfully provided a media comment to the NYE on the way that the PCP operates. The PCP doesn’t often formally vote and when it does, it is usually only on constitutional items like setting the precept. It prefers to do most things by consensus and he can`t remember a time when the panel may have divided on party lines.

The make-up of the PCP reflects the proportionate political make-up of the District Councils, the North Yorkshire County Council and the City of York Council. It has changed over the years the Panel has been operating. According to the PCP website Governance Police & Crime Panel there were ten Councillors on the PCP on the 8th of April 2021. Five are Conservatives, two Liberal Democrat, one Labour and two Independents. The Chairman is Councillor Carl Les (Conservative); Councillor Ashley Mason JP (Liberal Democrat) and Councillor Peter Wilkinson (Conservative) serve as Vice Chairman. In addition there are two independent co-opted members.

This means that while they do not have an overall majority, the Conservative Party dominates the PCP because it only takes one or two of the other Councillors to agree with the Conservatives and they can determine what line the panel will take on a given issue.

This has had major implications for the effectiveness and attitude of PFCC Mulligan as we shall see in the next article.

The 2016 election was run using proportional representation and the results were as follows:

As shown above, the candidates are nominated by political parties, with one independent. In my opinion this is unfortunate. Unlike the role of a local councillor, the role of PFCC is not really affected by party political policy, being based more around local issues of crime, holding the police to account and value for money.

However, because three of the candidates are sponsored by political parties, the nature of the voting public in North Yorkshire means that the Conservative candidate has been voted in each election -not because he or she is necessarily better suited to the job- but because they are on the Conservative ticket. This may be partially the result of the poor media coverage, which has not given the voters enough information about the candidates so they can distinguish the relative strengths of the individual candidates.

Traditionally, elections for the PCC have had a very low turnout. In 2012 the turnout was 13.3%; in 2016 it was 22.47%. This is in part due to voter apathy and also to a failure by the media to give the PCC elections an appropriate level of publicity, compared say to local council elections. It is also concern that because of the COVID 19 pandemic, the turnout will be even lower this year.

This is a shame, because in real terms, the PFCC is a more important officer than that of any local councillor, having real power over a large budget and critically important services. It is vital that local people use their right to vote on this critical appointment. So the NYE is covering the elections with an Election Special series of articles, to provide an appropriate level of coverage for this critical role and to encourage more people to vote.

The deadlines for registration to vote, nomination of candidates, etc, are set out in this Notice of Election.

PFCC Mulligan had a complaint of bullying upheld against her and following parliamentary criticism of her management style, the Conservatives withdrew her automatic nomination to be the next Conservative candidate for PFCC, effectively de-selecting here. NYE article here.

I have been covering crime in North Yorkshire since 2012 and, in common with other media outlets, my interaction with PFCC Mulligan and her staff has been negative and disappointing. But in assessing her tenure as PFCC, I will try to be impartial.

PFCC Mulligan has had many successes since she was first elected as the Conservative candidate in 2012. She has:

These are all significant achievements and PFCC Mulligan is to be respected for them.

However, her tenure as PFCC from 2012 until 2021 has been deeply controversial.

In my next article, I will continue my assessment of PFCC Mulligan’s performance as PCC and then PFCC, focussing on the controversies that have undoubtedly led to her downfall as PFCC and the end of her political career.

Mrs Mulligan and the North Yorkshire Police and Crime Panel have had access to a draft of this article and an opportunity to comment.