I have followed the progress of the complaint against North Yorkshire’s Police & Crime Commissioner (NYPCC) Julia Mulligan with great interest.

Initial report from the BBC here.

This not the first time that Mrs Mulligan has been accused publicly of misconduct towards her colleagues:

The report can be read here. A complaint against Mrs Mulligan was upheld. It makes uncomfortable reading. For those who do not want to work their way through it, some quotes from it (in no particular order) with some personal observations are provided below.

The complainant is referred to as AB throughout the report:

“However, there are multiple examples given within the complaint statements of the PCC reacting irascibly towards various staff in the office, particularly at stressful points or when the PCC felt her expectations hadn’t been met. The Sub-Committee are concerned that more than one individual also gave an account of senior staff within the PCC’s office apologising privately for the PCC’s apparently inappropriate or disproportionate behaviour, or attempting to justify it.

The Sub-Committee considers that the multiple accounts of staff perceiving themselves to being subjected to frequently irascible and intimidating behaviour by the PCC is sufficient to demonstrate a misuse of power or position and an overbearing approach to supervision of staff.”

“[Bullying] can affect an officer’s professional performance and psychological welfare and can be so destructive that the effects continue after work, devastating personal lives as well as careers.”

However, based on the information available, the Sub-Committee considers that there is evidence that AB (and those providing supporting statements) had experienced bullying behaviour from the PCC across a number of the exemplifying areas highlighted.

….bullying “may be characterised as offensive, intimidating, malicious or insulting behaviour, an abuse or misuse of power through means that undermine, humiliate, denigrate or injure the recipient”. Bullying may be single or repeated incidents and is not necessarily face-to-face. In addition, the Sub-Committee also feel the following statement from the guidance to be critical: “Bullying…is unwanted behaviour that makes someone feel intimidated, degraded, humiliated or offended”. The Sub-Committee consider it key to place how the complainant felt about the behaviour at the centre of this assessment.

While the PCC may not have deliberately set out to bully the complainant, the behaviours as perceived both by AB and the supporting individuals exemplify characteristics of bullying behaviour as set out in the OPCC’s own guidance on bullying.

The fact that there are multiple accounts gives cause for concern that there is – or has been – an endemic issue around the perception of bullying within the organisational culture, which needs to be addressed. The accounts presented suggest that the perceived behaviour experienced by these individuals was below the standard that should be expected

Overall the impression gained from these quotes is of a sad tale of employees having their lives made a misery by bullying from someone that cannot manage people, abuses her power as an employer and has no consideration or respect for her staff.

If this is so, then it will inevitably lead to a demoralised workforce, an oppressive office environment and a dysfunctional Office of the Police and Crime Commissioner (OPCC).

This is particularly concerning given the psychological impact of bullying on an individual’s welfare, which is very well described in this Police Federation Policy Document.

In my career, I have seen the devastating effect that bullying can have in an office environment and I am implacably opposed to it. I therefore truly feel very sorry for the people working in the Office of the Police & Crime Commissioner. Nor should it be forgotten that the good taxpayers of North Yorkshire, have shelled out good money for an OPCC, which appears to have been degraded by the antics of the PCC: The very person whose duty it is to look after her staff and ensure the efficient running of her office.

…..the Sub-Committee consider that the ability to demonstrate a calm, centred resilience and leadership in the face of difficulty are essential qualities for the office of PCC and in leading by example; this would help support staff to be able to adapt to fluctuating pressures and circumstances themselves.

The clear implication of this paragraph is that PCC Mulligan does not have the personal qualities to be a Police& Crime Commissioner, or run the PCC’s Office.

“The PCC has reflected in her statement that she can be “challenging and difficult” in her approach to the role at times but considers that this is part and parcel of being able to survive and thrive in the ‘male-dominated’ arena in which she works and to try and deliver the best service for the public. The Sub-Committee consider that the PCC’s view on leadership cultures is highly stereotypical in approach, based on assumptions around behaviours which she perceives to be demonstrated by successful senior male leaders in public office.”

I do not know the identity of AB. I suspect it may be a female member of staff. Eight of the fourteen staff employed by the OPCC are women. So I suspect that some of the people that have been subjected to Mrs Mulligan’s behaviour were women. If this is so, then bizarrely, Mrs Mulligan appears to have adopted the unacceptable, outdated, misogynistic and bullying practices used by some men, in the asinine belief that this conduct is acceptable because she perceives them to be successful.

This is incredible given that it is contrary to her own policies and contrary to North Yorkshire Police policy on misogynistic hate crimes.

The conclusion is inescapable that if Mrs Mulligan had been a man, she could have had a misogynistic hate crime recorded against her.

In terms of the long term implications of this investigation, perhaps the most damning passages in the report are these:

“The PCC has challenged the competency of the complainant and two of the other individuals providing supporting statements.

No evidence was provided either within the complaint or by the PCC herself to suggest that the PCC had reflected on her personal approach to staff, or apologised directly thereafter, after having vocalised her anger or frustration towards the staff involved.  This is a cause for considerable concern.” 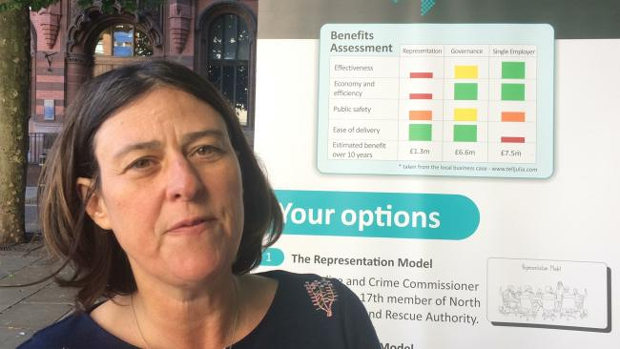 Would you want to work for N  Yorks  Police & Crime Commissioner Julia Mulligan?

In general terms, typically, a classic bully cannot see any wrong in his or her actions. They respond to criticism by attacking the critic, or holding them responsible for the consequences of their own actions.

In this case, Mrs Mulligan has been censured by the Sub-Committee after an open and fair hearing. Yet she cannot accept she has done anything wrong and has dismissed the complaints by alleging that the complainant and two of the witnesses were not competent.

The same theme occurs in her personal statement, which can be read here. Two quotes from it will suffice I think:

“I therefore do not recognise any ‘systemic’ issues within the OPCC.

…..were there a mechanism to appeal, I would certainly do so.”

It seems to me that Police & Crime Commissioner Mulligan is in denial.

If this is so then it seems to me unlikely that she will be able to reform and stop her unacceptable behaviour.

On a related point, Mrs Mulligan has some history. The refusal to apologise or consider any failings in her own conduct accords with my own experience of Mrs Mulligan. In 2013 the Police & Crime Panel upheld a complaint by myself against Mrs Mulligan and told her to apologise to me. Needless to say as with the findings above of bullying of her staff, Mrs Mulligan did not apologise.

In my opinion, it is obvious that PCC Mulligan is not up to the job and her standard of behaviour falls far below that which the Police, her staff and the people of North Yorkshire should be entitled to receive.

I believe firmly in leadership by example. PCC Mulligan’s conduct is unacceptable and contrary to the values and culture of any reputable organisation. Especially in a job as stressful and demanding as the police service, where the public expect only the highest standards of conduct.