Sources within what is now known as “the education industry” have reported that the Headteacher of Hawsker-cum-Stainsacre Church of England Primary School, Mr J.C. HARDWICK B.Ed (Hons) NPQH, has been under suspension since mid-September 2016 – barely into the autumn term – pending the conclusion of an investigation into allegations of physical abuse of one or more boy(s). It is understood that Mr HARDWICK – a teaching Head – was summarily escorted from the premises.

However, the Enquirer is given to understand that steps have been taken to obviate the necessity for calling in the North Yorkshire Police (NYP), though what these steps are, and how they could be legitimate, is unclear, since the allegations are apparently of a nature such as would indicate one or more criminal offence(s) having been committed.

Unsurprisingly, the Hawsker School web-site presently makes no reference to any of the foregoing, though concerned parents have been informed that Mr HARDWICK, who likes to be known by his middle name – Carl –  will not be returning to the school. That sounds, to my ears, very much like a predetermination of guilt.

Mr HARDWICK’s five-and-a-half-year tenure has not been a happy one. Shortly after his appointment, in 2011, County Hall sent in some sort of a resident overseer to set about elevating Mr HARDWICK’s performance to an acceptable level.

It follows that NYCC will struggle to achieve ‘plausible deniability’ this time around, since careful monitoring of Mr HARDWICK must have been undertaken (and thoroughly documented) over the past five years. Apparently the monitoring has not been careful enough. Indeed, one may be forgiven for wondering why the OfSTED Inspection of June 2013 did not expose any perceived  ‘shortcomings’.

Recognising its historic foundation, the school will preserve and develop its religious character in accordance with the principles of the Church of England and in partnership with the Church at parish and diocesan level.

The school aims to serve its community by providing an education of the highest quality within the context of Christian belief and practice. It encourages an understanding of the meaning and significance of faith, and promotes Christian values through the experience it offers to all its pupils.

Parents have expressed a significant loss of faith in the ‘Christian beliefs and practices’ and ‘Christian values’ trumpeted in the school’s Ethos Statement, chiefly on account of the blanket of secrecy that has been thrown over the present affair.

A source within County Hall reports that HR and CYPS are in a state of DefCon 3 – mortal dread of the story getting into the press so shortly after a most ignominious Safeguarding disaster at another school in the area, again painstakingly concealed from the press.

Of course, it may be that Mr HARDWICK is entirely innocent of any wrongdoing; one would like to hope so.

But my suspicions are aroused because no response has been forthcoming to a request for a statement directed to Dr Andrea DICKINSON-BACK, Chair of the Board of Governors (of which Carl HARDWICK is also a member), dated 9th December 2016. 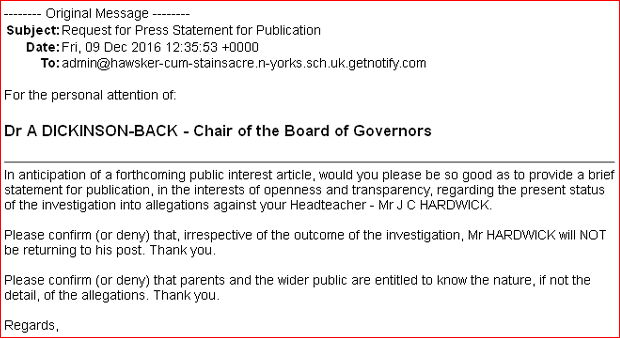 Not a peep – which is disappointing from a woman who proclaims (in her ‘pen portrait’ on the Ruswarp School website, where she is also Chair of Governors) her twenty years experience in the education industry as Principal School Improvement Adviser for Redcar & Cleveland Local Authority, where she led the School Effectiveness Service with a team of 40 people. To what extent she effectively inculcated the principles of transparency, openness and honesty amongst her team is not known. This much I may opine, without fear of contradiction (or litigation): not so very much.

Readers will perhaps wish to join me in the provisional conclusion that Dr Andrea DICKINSON-BACK has thus successfully identified herself as a public servant who has lost sight of her primary responsibilities – transparency, openness and honesty – which would appear, on this occasion, to have been occluded by her sincere commitment to ‘Christian beliefs and practices’. Or something. Or maybe it just makes her feel important to have it in her ‘power’ to withhold information  from the great unwashed tax-paying public.

But if Carl HARDWICK is guilty, then Dr DICKINSON-BACK will also be guilty – of failing in her Duty of Care to any  victim (or victims?) of her wayward Headteacher.

She now has the opportunity to redeem herself, in part, by providing a full and forthright explanation, for publication, as to what exactly has been happening at her school. If she does, it will appear here on the Enquirer. If she does not, then it is my expectation that she may be dealing with a major ‘reputational management’ crisis of her own.

One hopes that any forthcoming explanation will include an assurance that Mr HARDWICK, during his suspension, is not presently in a position to arouse further Safeguarding concerns. That would be another significant Safeguarding failure.