Good morning and a Happy New Year to you.

Since the publication of my recent article, I have been approached by a number of parents with children at the school. Their stories are illuminating.

I look foward to you responding to my questions as promptly as you possible can. New year, fresh start.

Regular readers of the Enquirer will be unsurprised to learn that I have recieved no response from Pete DWYER. Business as usual; I never do. Complaints to that effect have vanisged into the ether. Perhap Pete DWYER might respond to enquiries from parents, to the following email address: Pete.Dwyer@northyorks.gov.uk

I also wrote to Dr Andrea DICKINSON-BACK, the Chair of the Board of Governors at Hawsker Primary School:

Having ignored my email of 9th Decemeber 2016, and being aware (I imagine) of the appearance of my article in the North Yorks Enquirer yesterday, you may now consider it timely to offer a statement for publication regarding the widespread belief that your Headteacher was a hopelessly inapprorpriate appointment. I hope you will, if only with the intention of minimising any further ‘reputational damage’ to the school or yourself.

I do not tolerate secrecy or evasion on the part of public servants, paid or otherwise, and I do not intend to let the matter drop. Parents are entitled to know if, by sending their children to school, they may be incurring unnecessary risk.

Regular readers of the Enquirer will be unsurprised to learn that I have received no response from Dr Andrea DICKINSON-BACK. Predictably.

However, my email (with it’s internal link to last week’s article) did provoke a reaction of sorts from Dr Andrea DICKINSON-BACK, not to me but in the form of a letter to parents of children presently attending the school. Parents of children who have left the school during Carl HARDWICK’s tenure as Headteacher tell me that, prior to having sight of this letter on social media, there has been no information forthcoming from the school at all. Here is a photo of Dr DICKINSON-BACK’s letter, dated 4th January 2017: 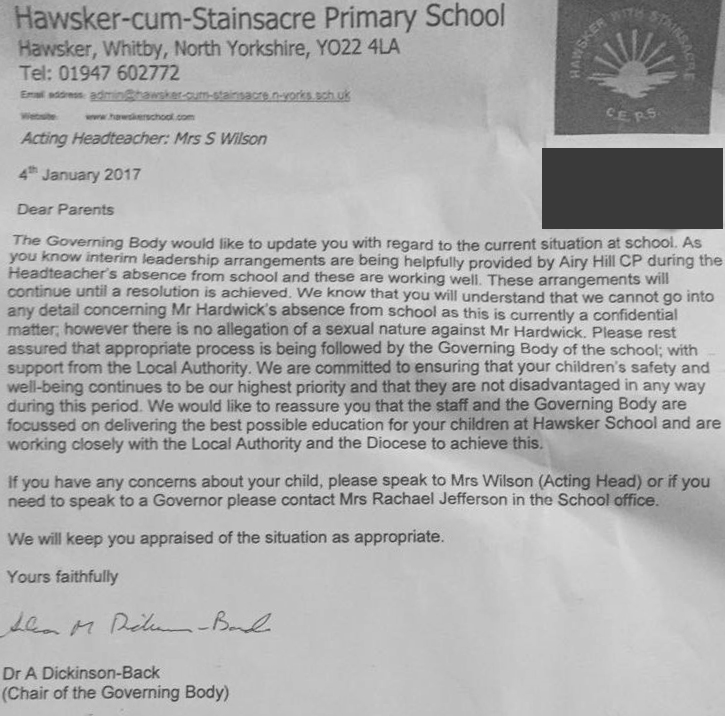 (I think she means “apprised”, not “appraised” – but who can be sure what ‘academics’ think they mean?).

I have not yet written to the Diocese; there are many calls on my time and seeking clarity from a black hole is not at the top of my list of priorities. The Diocese is welcome to write to me if it is anxious to place the truth before the public; I would be happy to submit any comments to the editor of the Enquirer for publication.

One might expect public servants (especially those who lay claim to Christian values) to evince some sense of responsibility in regard to keeping the public informed – as I am sure they would, were it not for the fact that transparency runs the risk of having a negative effect upon the prime imperative: ‘reputational management’.

Of course, many parents do have grave concerns about their children’s safety and wellbeing. Many – but not all. By way of balanced coverage, The Enquirer has received the following email (also on 4th January 2017) from one parent,  Amy PULLING, attaching a snapshot of a personal letter from her son, Oscar, aged 8, which I reproduce here:

Good afternoon,
My 8 year old son attends Hawsker School and has just written the attached letter.
A man who has no link whatsoever to the school has written something for you recently which I find to be truly disgusting and I felt a voice from the school should be heard too. 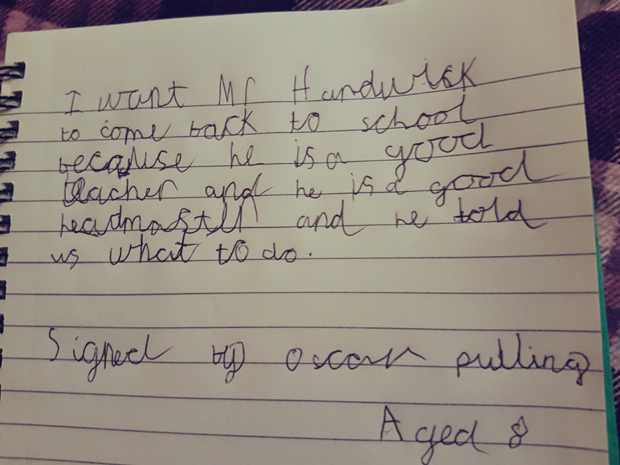 However, Oscar’s letter (written, please be sure, without any prompting from Amy) has been the sole voice, until now, raised in support (if not defence) of Carl HARDWICK. (“He told us what to do”).

More cogent is the following email, received by the Enquirer on 2nd January 2017 (two days before Dr Andrea DICKINSON-BACK’s letter to the present parents):

Dear all at NY Enquirer,
I am writing to you as I am utterly shocked at the information in your article about the Safeguarding ‘cover-up’ at Hawsker Primary School and feel the school is now on a continuing downward spiral as a result of recent changes.
First of all at no point since Mr Hardwick has left has a letter been given out to parents saying he will not return. Neither have we been told why or how long Mr Hardwick will be absent from school for. We have just been left completely in the dark about the whole situation. One parent who recently spoke to Mr Lidgley (the acting head and also headteacher at Airy hill primary school) was told the investigation would take between 6 to 12 months. This was then spread around all the parents as gossip, so really we don’t know what to believe. The way the whole thing has been managed in my opinion is unprofessional.
My child attends the school and since Mr Hardwick left the school has seen further changes which I feel are not benefiting my child or many of the other children in the class. My child was in a class of around 10 pupils and the acting head Mr Lidgley sent a letter to say the school was being re-structured. My child now has over 20 children in his class, no teaching assistant, around 7 children with special needs and a teacher who is new to teaching. If there were failings when Mr Hardwick was headteacher, then failings have also continued in his absence, as it seems the children are not the priority in this school but money saving is. Many parents choose village schools for the small class sizes and such negative and drastic changes seem very unfair on the children especially at such a difficult and uncertain time. I certainly do not want my child’s progress suffering. Many of the parents are unhappy and want answers to what exactly is happening, and from the ones I have spoken to, many are contemplating changing schools for their children.
On Wednesday morning when the school reopens myself and a number of other parents would like someone to give us answers – not only about the past but about what happens to our children now. Is their safety and learning the priority of the people in charge of the school?
Anonymous

On this evidence, Dr Andrea DICKINSON-BACK’s assurance that things are “working well” rings rather hollow.

Here follows a brief selection of some of the less flagrant comments on this topic that have been published into the public domain via social media (I have redacted names to protect the privacy of the parents in question): 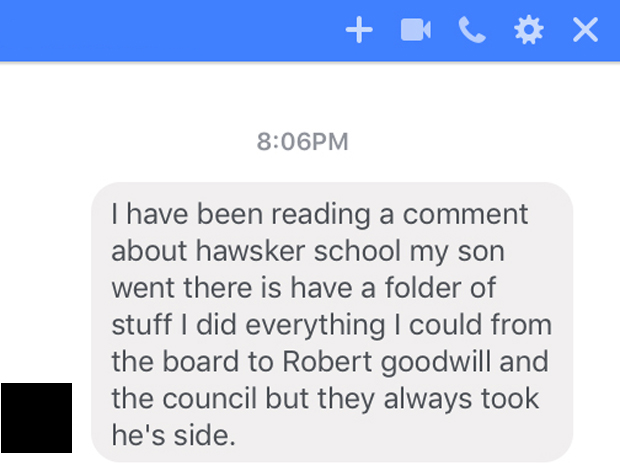 Meanwhile, I have interviewed a number of erstwhile members of Hawsker Primary School’s teaching staff. More than has one reported having been reduced to tears, in front not only of other staff members, but in front of children, too – and on more than one occasion. Most significant is that these incidents have allegedly been taking place without interruption since Carl HARDWICK’s appointment. Now that HARDWICK’s tenure as Headteacher at Hawsker Primary School is in all probability over, several former staff members have expressed concerns that he will in due course be ‘shuffled sideways’ and deposited, without visible blemish, on some poor unsuspecting children at a school elsewhere in the County. It has certainly happened before . . .

Readers may be certain that I will continue to cover this situation; hopefully, a belated reaction from Pete DWYER will provide some clarity about what has been going on at Hawsker Primary School – and what will be done to recompense the children whose education has been interrupted by unnecessary and unacceptable trauma. Maybe even some counselling.

Who knows, maybe somebody in North Yorkshire’s education industry will recall the legal implications of ‘Duty of Care’?