An Open Letter to the Councillors and electors of the Borough of Scarborough from Mr Ben MARRIOTT, the “whistleblower” at the heart of the fraud and corruption “whitewash”, directly challenging Mrs Lisa DIXON’s version of events. In particular; “What you need to ask yourself is why is someone in Lisa Dixon’s position deliberately lying to elected Councillors”.

Happy New Year to you all!

I thought that, by now, I could relax and enjoy my retirement after the relentless trauma of having to fight the local Council over issues that should never have arisen. I find that I cannot; and that more lies and deceit are being peddled.

Regarding the statement that has been put out to you all before Christmas by Mrs Lisa Dixon; I want to cover the points raised, forthwith:

Finally, I have taken steps to report this whole affair to the North Yorkshire Police. I feel I have no choice. Things have not changed as yet and I doubt that they will till Councillors and the public say “enough is enough”. The Council Officers you rely on to make value judgements are telling you what they want you to hear, rather than the truth. You are now aware of that facts, so what are you going to do about it, Councillors? I have, as mentioned, informed the Police about corruption which as already been proven. Officers have admitted to having had work done by contractors at favourable rates. Also, I have asked them to look into the assault that I have suffered through the lies and pressure they have conspired to put me under for years, causing me actual bodily injury, heart attacks, then followed by open-heart surgery.

Thank you all in advance for your patience and professionalism in this matter; and to say I was proud to serve SBC in my professional capacity. The Council does have a lot of good hard working and dedicated people working for it. However, the rotten apples need to be weeded out now.

For information, the employment tribunal case involving one of our former employees, Mr Ben Marriott, concluded in Hull last week.

Although the Council remains disappointed by the Tribunal’s decision, to avoid any further court costs and implications on the public purse, the Council reached a settlement with Mr Marriott.

For the record, the settlement was for the Council to pay £95k to Mr Marriott.

The Council’s legal fees in the matter are approximately £16.7k.

The external investigation we have instigated with our external auditors, Mazars, is now underway and we await the investigation’s findings early in the New Year.

A Scarborough resident has launched a petition in support of a vote of  NO CONFIDENCE in the present Conservative Cabinet of Scarborough Borough Council. Good to see even more Councillors signing. – cross-party now, except for the Tories (barring a former Mayoress!): 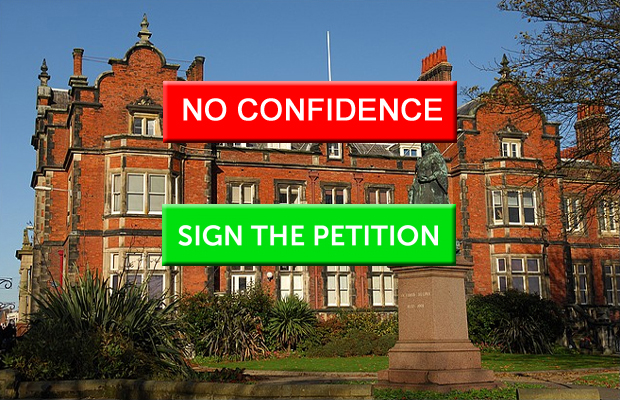