by Guest Author ALLAN ROBERTS, presenting readers with chapter and verse on the monumental arrogance and incompetence behind decision-making processes at Scarborough Harbour.

In 2006 Scarborough Borough Council installed two fish-landing davits on the West Pier at Scarborough Harbour, along with a 4-tonne static crane on the Vincent Pier.

All three installations were a disaster, and the Vincent Pier crane has already been subject to scrutiny on this site. (“Heavy Losses” – NYE 06/03/a6).

The fish-landing davits were problematic from the very start, with operators reporting electric shocks, and the davits were forever subject to mechanical failure.

“When installed at the same time as the Vincent Pier crane, these have never been fit for purpose, thousands has been spent already getting them fit for purpose but to no avail”.

In June 2011, at a meeting between SBC and the Harbour Users’ Group, the davits were described as being in a ‘poor condition’. The minutes of the meeting record the  Harbour Master as stating “there had been problems with the hoists for a number of years and agreed to investigate the possibility of a more practical/robust system.”

In Sept 2011, at meeting between SBC and the Harbour Users’ Group, the Harbour Master is minuted as stating:

“he appreciated there was a history of issues with the current davits and something more reliable and robust was required. A diagram of a possible type of replacement davit was distributed and the group where asked for feedback. This type of davit is used in most harbours and complies with current regulations. The HM confirmed that once a successful tender has been received further investigation can take place, and added it would have to go through the councils formal tender process.”

On 10th Jan 2012, at a consultation meeting between SBC and the Harbour Users’ Group, the Representative of the Scarborough Fishermans Society, as the main users of the proposed davits, advised the Council of a popular and proven purpose-built davit widely used in other ports around the country on a day-to-day basis as being their preferred choice. That company was Spencer Carter. The minutes of that meeting record that:

“West Pier. Tenders have been sought to supply and fit two new landing davits. Consultation took place amongst the group to identify equipment  most suitable and fit for purpose. The new equipment is intended to best fulfil the current and future needs of the harbour and its users and be robust enough to meet long term aspirations. Capt Ian Vasey advised tenders are due to be returned mid January, it is then intended to seek match funding from the European fisheries fund on this basis it is anticipated that the hoists will be replaced early 2012.”

The above words, carefully chosen to convince the Harbour Users’ Group that they were taking part in consultation exercise turned out to be pure rhetoric. The decision on the davits had, in fact, already been decided. The ‘consultation’ was, in my view, a complete SHAM…

May I draw your attention the statement below, made by the Harbour Master to the Cabinet just 6 days later, on 16th Jan 2012:

“Following issues over a prolonged period regarding the type and reliability of the existing West Pier landing davits tenders have been sought to supply and fit two new landing davits. Consultation has taken place with individual users and the harbour user consultative group to identify equipment most suitable and fit for purpose. The new equipment is intended to best fulfil the current and future needs of the harbour and its users and be robust enough to meet long term aspirations. Tenders are due to be returned mid January, it is then intended to seek match funding from the European fisheries fund.”

It was apparent that the Harbourmaster, Ian Vasey, was blatantly reporting to the Cabinet that consultation had taken place, and intimating that agreement had been reached, which was NOT the case. Once again, in my view, the Harbour master was spouting yet more rhetoric.

It was becoming increasingly clear that the choice of davit preferred by the Scarborough Fishermens Society was in fact being disregarded, and so the Society emailed Cllr Cockerill, the SBC Cabinet Member with responsibilities for harbours, this query, dated 27th Feb 2012:

Also can you advise that if, prior to selection of these davits SBC intent consulting and or course heeding advisement as to their suitability/durabilty?”

Within the hour, Cllr Cockerill made this response:

“We are close to selecting the supplier of the davits, we had to go back to the firms as we made some minor adjustment to the specification and had to give all of them the opportunity to quote for the identical product specification.

As the provision of the davits has already been discussed at various meetings, including the Harbour User Group, the final decision will be taken in line with established SBC procurement procedures.

Having had some experience myself in the design and manufacture of similar products, I will be looking to ensure the best Value for Money is achieved including backup for repairs etc.”

(Make a note of the last sentence of Cllr Cockerill’s email; I will refer to it later).

It is apparent, then, that Cllr Cockerill had already decided who would supply the davits, and in view of the lack of interest shown by SBC, the Fishermens Society contacted their preferred supplier, Spencer Carter, a manufacturing company in Falmouth that specializes in building sea-fishing machinery designed to operate in a harsh marine environment, such as trawl winches, net haulers and pot haulers and who also provide a range of landing davits.

On 24th March 2012, the Fishermens Society received a quote of £8,527 for a 250Kg capacity Quayside Landing Davit, with a delivery time of 6/8 weeks. The quote was passed on to SBC.

On the 3rd April 2012, at a consultative meeting between SBC and the harbour users group, the Fishermans representative Mike Handley made it quite clear to the Council that they disagreed with the Councils choice of supplier. The minutes record that:

“Mike Handley emphasised that the design must be what the fisherman want or it will be another waste of money. Cllr Cockerill advised that the Spencer Carter design was only an example to work from.”

The suspicions of the Fishermans Society proved to be well justified when, just 2 weeks later, the Harbour Master’s report to the Cabinet records that:

“Further progression has been made with the installation and renewal of the West Pier landing equipment by LCE Construction & Engineering Ltd; the manufacturing of the davits is complete and are currently in the installation phase.”

The Harbour Master’s report to the Cabinet dated July 2012 records that:

“Following strengthening works to areas of the West Pier to enable the installation of the two new electric/hydraulic davits, LCE engineering has completed the installation, commissioning and certification process. The davits are now operational and are providing the fishing community with a much improved robust system, the cost of these improvements is 37K.”

It is worth mentioning at this stage that 2 Spencer Carter davits would have cost just £17K.

Fast forward now to the present date and we have one of the davits whose only purpose for the last 9 weeks has been to support two signs. One sign displays the words ‘OUT OF ORDER’. The second sign reads:

“The contractors are currently waiting for parts, these are coming from ITALY and unfortunately as yet we do not have a delivery date.

We will provide further updates when we have more information” 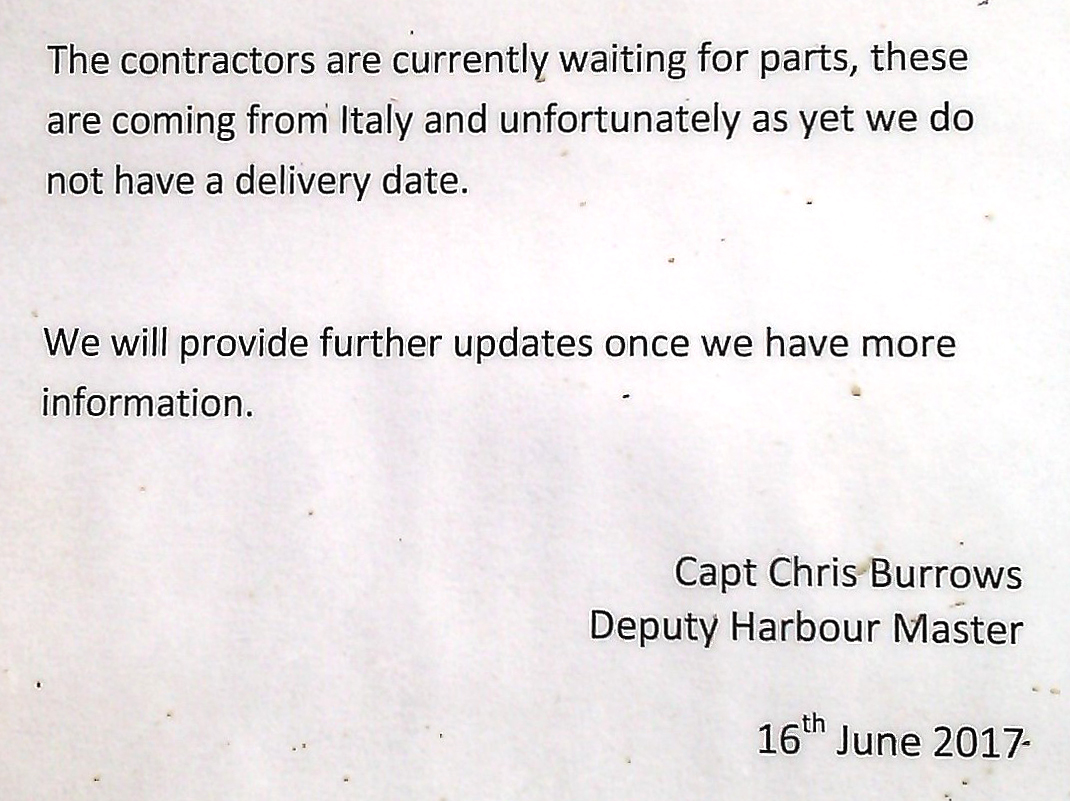 Meanwhile while we wait for that information, lets re-visit this extract from Cllr Cockerils email to the Scarborough Fishermans Society dated 27th Feb 2012:

I will be looking to ensure the best Value for Money is achieved including backup for repairs etc.

Here’s how I see it.

‘Back up for repairs’?

I much prefer the words of that other Mike in this fiasco, who is on record as advising you thus:

“Mike Handley emphasised that the design must be what the fisherman want or it will be another waste of money.”