It is of some significance that we should learn about the proposed ‘solution’ to Councillor Mike COCKERILL’s racist remarks, not through a public announcement from Scarborough Borough Council Monitoring Officer Lisa DIXON – whose £72K per annum duties include scrutinising the conduct of SBC Councillors and ensuring that they adhere to, and promote, acceptable ethical standards – but through the national press. 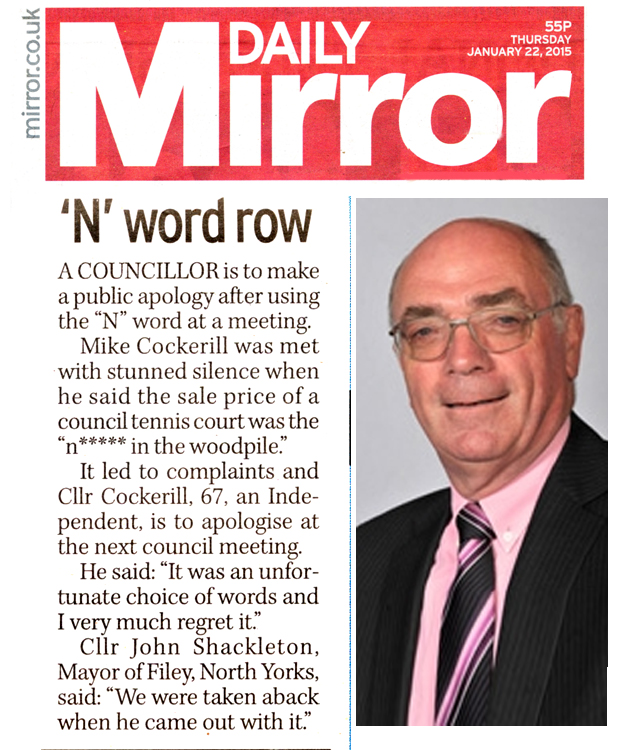 Apparently, Councillor Mike COCKERILL (who is the Cabinet Portfolio Holder for Harbours, Assets & Coastal Flood Protection) is going to say “Sorry” at a Special Meeting of Filey Town Council (FTC) next Wednesday 28th January 2015, for using the “N-word”.

In the hard-copy of the Scarborough News (but not in the on-line version) we learn that, in a “behind-closed-doors meeting”, Councillor Mike COCKERILL “was scolded for the slur, and ordered to make a public apology”.

The significance of this is obvious; Councillor Mike COCKERILL does not, in his heart of hearts, acknowledge that his terminology is utterly unacceptable. He has been “ordered” (i.e. forced) to go through the motions of expressing regret.

Leaving aside FTC Mayor Councillor John SHACKLETON’s assertion that “There’s no way I can think this remark is racially motivated in any way”, what are we to conclude regarding a remark made by an SBC Cabinet Portfolio Holder with thirty years plus experience in local government who maintains within his vocabulary the language of the building-site of thirty plus years ago?

That it ‘just slipped out’?

That language of that thoughts and words like of that sort float around inside his head all the time and on this occasion one ‘just slipped out’?

“Sorry – it just slipped out” is utterly inadequate.

There was a time – thirty years ago – when a public servant caught in the undeniable (and undenied) commission of a disreputable act could be relied upon to pursue the honourable course of action – to resign.

I have received an email from a member of the public who asserts that this is not the first time that Councillor Mike COCKERILL has resorted to that particular form of words at a public meeting. I have no recollection of the event – but, then, I attend public meetings only rarely. I am told that it may be that a recording exists. I am waiting to hear.

In my view, it is the sheer arrogance of public servants, especially those elevated beyond their competence, that the public quite rightly finds so deeply offensive. The prevailing attitude amongst Councillors is that if a ‘mistake’ is made, the Monitoring Officer will be there to ‘smooth things over’. The North Yorks Enquirer contains many well-documented instances of exactly that.

Notably, the Whitby Harbour Board (WHB) – of which Councillor Mike COCKERILL is Chair – has a history of arrogant and pejorative utterances. Readers may remember my article “Crawling Into The Gutter With Whitby Town Council”, in which I reported on WHB members Mr Tony HORNIGOLD and Mr Edwin BLACK’s thoroughly offensive correspondence with Whitby Town Council (WTC) and Mayor.

My Formal Complaints to SBC Monitoring Officer Lisa DIXON have received neither acknowledgement nor response to this day. 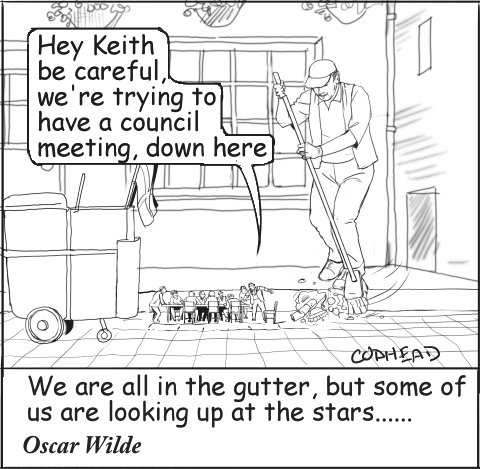 Of course, no response is a response – it tells us that Tony HORNIGOLD’s and Edwin BLACK’s conduct (albeit of a lesser degree of impropriety than that of Councillor Mike COCKERILL) was indeed in breach of the Members’ Code of Conduct and that the Monitoring Officer was (and remains) unable to mount a plausible defence – just as she is unable to mount a plausible defence on behalf of another errant SBC Cabinet Portfolio Holder, Councillor Jane KENYON-MILLER, whose failure to declare her interest as Chief Financial Officer and Agent for Service of Belvedere Computers Inc, her bankrupt and tax-evading California company, on her Register of Interests – a criminal offence under the terms of the Localism Act 2011. Ignored by Lisa DIXON.

Even Mayor of London Mr Boris JOHNSON has finally conceded that he must pay his US Taxes – if only to satisfy appearances – and has done so. Apparently Councillor Jane KENYON-MILLER believes herself above the law and gives not a t**ker’s cuss about appearances. But that is contradicted by her insistence upon using a photograph that is all of twenty years out of date on her official SBC web page. Never fear; the bonfire of the vanities is ready and primed. 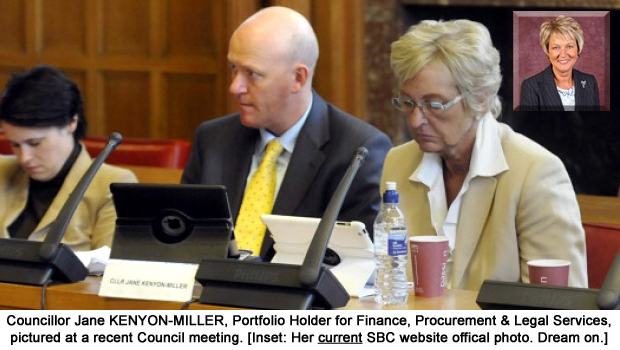 Readers will wonder how it can be that, in the Monitoring Officer’s professional opinion, the expression of a transparently insincere “Sorry” to Filey Town Councillors (and a handful of local residents) will suffice to rehabilitate Councillor Mike COCKERILL – in an election year.

In reality, this is unsurprising, since Lisa DIXON directs what seems to be the larger part of her attention to exculpating errant Councillors.

But this particular case is bound to bring her more (and more personal) embarrassment.

The declaration on Lisa DIXON’s Register of Interests informs us that she is a member of Amnesty International.

Amnesty International is a worthy organisation. It declares its objectives thus:

Amnesty International is a global movement of more than 7 million people who campaign for a world where human rights are enjoyed by all. We reach almost every country in the world and have:

Our vision is for every person to enjoy all the rights enshrined in the Universal Declaration of Human Rights and other international human rights standards.

Remember, too, that Lisa DIXON did her best to prohibit my freedom of expression. Quite how she reconciles her professional misconduct with the Christian values she professes as a member of St Mark’s congregation is entirely a matter for her.

But returning to the matter at hand, a reader has kindly drawn my attention to a report on the Daily Mail website of a very similar circumstance at Ringwood Town Council, where (as recently as December 2014) the Deputy Mayor Councillor Michael THIERRY [Con.] apparently uttered precisely the exact same phrase as Councillor Mike COCKERILL did at FTC – the one about the woodpile, remember? Appropriately, New Forest Conservative Association are apparently to consider the possibility of standing him down.

In contrast to Scarborough Borough Council’s reaction to Councillor Mike COCKERILL’s use of the offensive remark, Councillor Michael THIERRY’s photo, home address and contact details do not appear on the Ringwood Town Council web-site, and the Mail informs us that although he still appears as a Councillor on the New Forest District Council web-site:

Conversely, there is a working URL-link on the Filey Town Council web-site for the Special Meeting scheduled for Wednesday 28th January 2015. Item 6 reads as follows:

In my view, the significant words are “for consideration thereon” – suggesting the theoretical possibility that Councillors may give due consideration to the prospect of declining to accept Councillor Mike COCKERILL’s apology.

It is regrettable, too, that FTC has opted for the decidedly euphemistic turn of phrase “an inappropriate comment”.

Since Councillor Mike COCKERILL has already admitted using a racist form of words, how is the public interest served by diluting its gravity to merely “inappropriate” – especially since the term “N***er in the woodpile” falls foul of equality legislation?

The suspicion arises that Councillor Mike COCKERILL will be attending only to serve appearances, while the FTC Councillors fervently pray:

“Please Lord, let there be barely a ripple on the public record, that we may swiftly forget and thereby encourage the unknowing voters to re-elect the guilty party.”

Their prayers may be in vain.