Late in the evening of Thursday 18th March 2021, having allowed the Chair of Audit an opportunity to read and digest my Open Letter, I emailed him again, asking him if he would be so good as to point out any error(s) he may have detected in my interpretation of the subject matter, in order to spare the CEO (and/or myself) from any unnecessary embarrassment.

With his wonted courtesy, the Councillor BACKHOUSE has come back to me – without identifying any fault in my reasoning (for which I have already thanked him) – and he has passed on my concerns to the CEO and the MO, requesting their consideration and advice.

May I have the temerity to draw to your attention an extraordinary procedural impropriety disclosed to me by the Portfolio Holder for Corporate Resources and ‘Leader of the Independent Group’, Councillor Janet JEFFERSON, in the following form of words contained in an email to me allegedly sent on  6th March 2021:

Few readers – and perhaps least of all, Councillor Janet JEFFERSON – will, at first glance, grasp the astonishing significance of this candid admission.

Allow me to explain, for Janet and our readers.

The membership of Scarborough Borough Council (like almost every Tier 2 and Tier 3 Council in the country) divides itself into politically affiliated Parties or Groups. The political breakdown of SBC presently looks like this:

All but 2 of our 46 Councillors (Councillors MALLORY and MORTIMER) are affiliated to one or another of 6 Parties/Groups.

In fact, Labour, the Conservatives and the Greens all represent political Parties (and sit on the Council in Groups bearing the same names) which, between them, account for 28 of the 46 seats. (13 + 13 + 2 = 28).

There are 2 politically unaffiliated Councillors [Unaff.] – Councillors MALLORY and MORTIMER.

The remaining 16 Councillors belong to one or another of 3 Groups comprising members who are not representatives of political Parties – the Independent Group [Ind.], the Yorkshire Coast Independent Alliance [Y.C.I.A.], and the Cluster of Independent Members [C.I.M.]. (7 + 5 + 2 = 16).

But what exactly is a Group? How is a Group defined?

Sections 8 and 9 of the Local Government (Committees and Political Groups) Regulations 1990 – LG(CPG)R 1990 – inform us that: 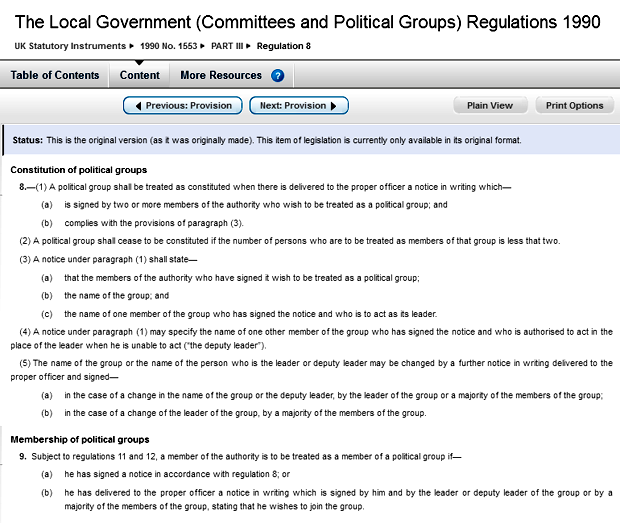 (Incidentally, the Local Government and Housing Act 1989 also sets out such requirements).

The monumental significance of Councillor JEFFERSON’s formal assertion now becomes crystal clear. I remind you of her precise form of words:

Having spoken to a representative number of members/former-members of the ‘Independent Group’, I am assured they did not sign, nor were they called upon to sign (either by the ‘Group Leader’ or the Monitoring Officer), any such notice; nor did the ‘Group’ Leader or ‘Deputy Leader’ co-sign any such notice.

This document, according to Councillor JEFFERSON and a number of other members, was neither signed, approved nor delivered to the “proper officer” (the Monitoring Officer) and “the Independent Group” is therefore not “a recognised grouep of the Scarborough Borough Council”.

It is apparently the case that the ‘Independent Group’ members have not been in compliance with the legislation as cited above, at least throughout the ‘life’ of the present Council – i.e. since May 2019.

I regret to have laboured the point; however, it has far-reaching ramifications.

As ‘Leader’ of the ‘Independent Group’, Councillor Janet JEFFERSON must take fully responsibility for this calamitous error of omission.

Firstly, precisely because the ‘Independent Group’ (by its ‘Leader’s’ own admission) is evidently not legally constituted (and is therefore not a Group), its members appear to have held no entitlement to inclusion in the politically proportionate distribution of Group seats (and/or Chairships) on Committees.

I find it both extraordinary and calamitous that the Monitoring Officer has apparently failed to take note of this omission so vital to democratic fairness. A very significant number of Decisions and Resolutions of Committees may now have to be revisited, on account of the procedural impropriety inherent in them having been passed by Committees whose memberships have been, for some considerable time, fundamentally so flawed as to raise serious questions over their legitimacy. This is not trivial.

Take, for example, the Leader’s recent creations – the ‘Lives and Homes’ Overview & Scrutiny Committee and the ‘Places and Futures’ Overview & Scrutiny Committee. (I find it equally extraordinary that the Leader has ridden out not one, but two Votes of No Confidence reliant on the support of the ‘other half’ of his much-vaunted ‘alliance’ with what now appears to have been an ad hoc collection of members not formally constituted as a legitimate Group – which is not quite the same (if you will pardon a moment of levity) as stating that they are an illegitimate bunch  – though some, perhaps, may hold that very opinion).

Joking apart, there are, as I am sure you will readily perceive, some rather serious governance ramifications.

One immediate consequence of Councillor JEFFERSON’s astonishing disclosure is that Councillors John CASEY, Jim GRIEVE and Paul RILEY (all ‘newbies’) have never hitherto held membership in a legitimately constituted Group. They are thus unaffiliated and have therefore held no entitlement to sit on either of these two new (or anyother) Committees: 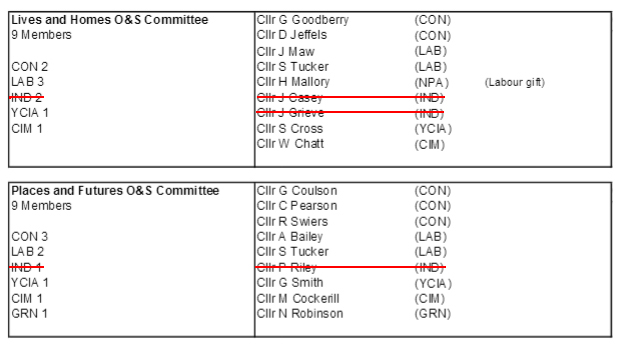 There is also a far from insignificant pecuniary component to this wholly unsatisfactory situation. 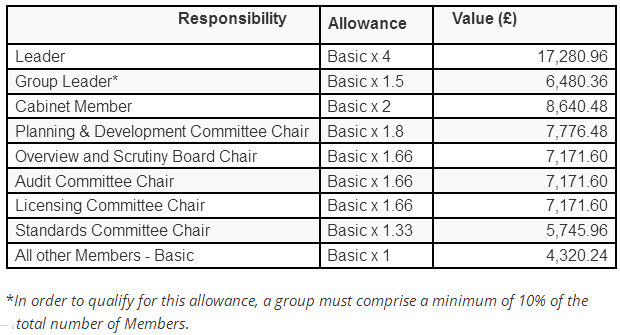 It is regrettable that I am able to discern only one plausible alternative explanation for what I have set out above, namely, that Councillor JEFFERSON has sought to deflect my concerns by an act of misrepresentation – but surely that cannot be the case?

I regret, too, that I am constrained to offering you the foregoing opinions in an Open Letter. As you know, my emails are diverted to a ‘single point of contact’ (SPOC) folder and may not be viewed for weeks, or even months.

This present matter is too pressing, by far, to be delayed by such nonsense (and I will be writing to you shortly on the matter of the interception of emails to and from Councillors).

I am, as ever, very happy to meet with you (socially distanced, of course), or to speak on the telephone, to assist you in resolving this very unfortunate state of governance maladministration.