The judgment has already found its way onto the Twittersphere: 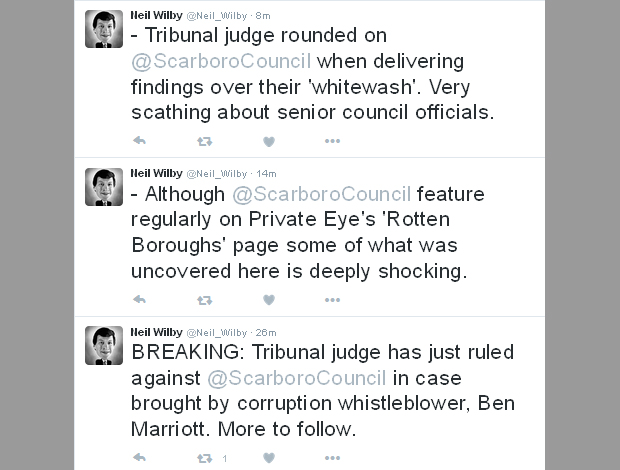 These three Tweets are confidently expected to act as the first tiny pebbles in an avalance of exposure of an astonishing saga of incompetence and cover-up that bears an uncanny similarity to the (ahem) ‘fictional’ articles published here on the North Yorks Enquirer in August 2013 and February 2016.

Even the Judge felt moved to employ the word “WHITE-WASH”.

On 15th September 2013, I emailed Mrs Lisa DIXON, Director of Legal & Democratic Services and Monitoring Officer at SBC on a number of topics, including the following:

On another matter, Councillor Mike WARD has prevailed upon me to share some information with you. You may recall a recent article of mine entitled “Corruptophenia” in which I describe a purely fictional, highly elaborate and systemic ‘scam’ within what equates to  the Technical Services department of a local authority. I utilised the device of attributing names to my purely fictional characters whose initials proceed alphabetical as the reader advances down the hierarchy.

I have now been provided with information regarding an almost identical structure operating within the Technical Services department of Scarborough Borough Council – apparently a case of life imitating art.

Please note that I am eminently willing to co-operate with you in exposing this fraud-ring so that the perpetrators may be brought to justice and the continuing abuse of the public purse be brought to a halt.

Should you prefer to rely on the Council’s internal monitoring processes, you are of course free to do so. One way or the other, I shall be naming names and identifying locations and works. I hope you will give serious consideration to the idea of us co-operating on this important matter. There is no reason why honourable and trustworthy people should suffer the indignity of any degree of ‘guilt by association’ in the court of public opinion.

I look forward to hearing from you during the course of the day.

I leave the reader, for the moment, with one line from that email:

Now that the matter has been aired in open court, I look forward to keeping my word.

I shall, of course, offer Mrs Lisa DIXON her ‘right to reply’ – which is more than Mr Ed ASQUITH, editor of the Scarborugh News (and its satellite, the Whitby Gazette) offered to me ahead of his factually wildly inaccurate smear piece against me in this week’s rags.