Campaigners in Whitby have been urging Yorkshire Water to stop leasing moorland for grouse shooting, with over 400 people signing petition postcards to the utility company over the recent bank holiday weekend.

The event was part of a county-wide day of action, coordinated by Ban Bloodsports on Yorkshire’s Moors and the League Against Cruel Sports, with campaigning events taking place in 17 towns and cities across the region.

Yorkshire Water is one of the largest landowners in the county, with wildlife being eradicated and peatland damaged by burning on the utility company’s moors to boost red grouse populations for shooting.

Investigations by campaigners on 8 of the 11 moors leased for grouse shooting by Yorkshire Water have revealed stoats being left to rot in bone-breaking traps, distressed wild birds caught in cage traps and burning performed over sensitive blanket bog habitat. A tawny owl was also found shot dead on one of the company’s grouse moors.

Yorkshire Water announced a review of the future of grouse shooting on Baitings, Turley Holes & Higher House Moors in Calderdale in March, which BBYM has welcomed as a step in the right direction, but says it’s not enough. The utility company is facing pressure to broaden out its review to encompass its other grouse shooting leases.

“Wild animals are being eradicated and sensitive peatland damaged on Yorkshire Water’s moors to ensure red grouse make it up into the air to be used as feathered targets. We thank the people of Whitby for asking Yorkshire Water to protect – not persecute – wildlife and habitat by pulling the plug on grouse shooting.

Nick Weston, Head of Campaigns at the League Against Cruel Sports, says:

“How can it be right that a water company is using it’s customers money to prop up the outdated and cruel practice of killing animals for fun? 700,000 grouse are shot every year in the UK despite 69% of the public being against shooting birds for sport.

Together with Ban Bloodsports on Yorkshire’s Moors, the League Against Cruel Sports is calling for Yorkshire Water to commit to end grouse shooting on its land and bring an end to the animal cruelty it is perpetuating.”

The issue of grouse shooting has become increasingly controversial with a number of high profile landowners across the region already distancing themselves from the practice.

Campaigners have vowed to continue until Yorkshire Water pulls the plug on grouse shooting. 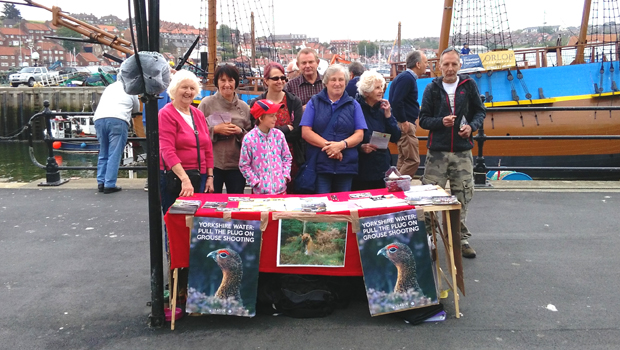