The nub of the article is that a “senior employee” (un-named) of School Partnership Trust Academies (SPTA) failed to declare a pecuniary interest disclosable under her/his terms of employment :

“The inquiry has concluded that a senior employee did not make an appropriate declaration of interest in a company associated with SPTA between 2011 and 2013.”

“We have taken a firm stance. As a result of the findings, an employee has voluntarily resigned from their position within the company. The non declaration of interest by the employee did not amount to criminal activity but did breach company policy and procedures.”

It is apparent that the unnamed “senior employee” in question committed wrong-doing of sufficient gravity that a resignation was forced, ostensibly after failing “to declare an interest in a company linked to the academy trust”. But clearly the article refers to something more than that, implicating wider “financial irregularities” at Garforth Community College, raised by Leeds City Council, which have now been forwarded to the relevant authority.

It should be remembered that the purpose of declarations of interest is to provide the public with a clear view of any potentially corrupt liaisons.

Councillor Lucinda YEADON, Leeds Council’s Executive Member for Children & Families says, not (I would imagine) without a degree of self-righteous glee at this serendipitous opportunity to have a pop at an academy chain:

“We take concerns regarding alleged financial irregularities very seriously, as all funds allocated for the education of children and young people must be used appropriately. As a result of concerns raised, we have looked at historic records for the academy and will now be asking the sponsors to investigate and notifying (sic) the Regional Schools Commissioner.”

Despite Leeds City Council’s portentous interjection, it is moot to speculate if it would have been quite so voluble had, heaven forefend, wrong-doing been found in a Council run school.

Transparency-wise, we are left to ponder the identity (and, therefore, the power and influence) of the departed “employee”. 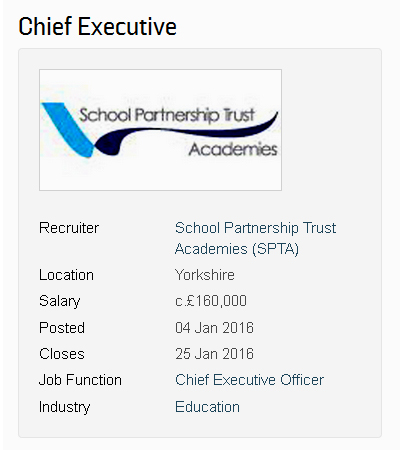 So is it the big cheese who has strategically departed? Sir Paul EDWARDS? Certainly he seems to have resigned directorships of two of the Trust’s associated boards on 17th December 2015, School Partnership Services Ltd and School Partnership Trust, and also from School Partnership Trust Academies on 21st October 2015, here – all are registered at the same address. From admittedly only a rather cursory glance, it looks like an intricate spider’s web – good luck to those who investigate the history . . .

A little further digging revealed that the Trust published the full recommendations following an investigation into concerns, on its website, here:

SPTA’s board asked three of its directors to form an Inquiry Sub-Committee following concerns raised about declarations of interest at a senior level.

It appointed independent legal experts to review the evidence and report back.

The Department for Education and Education Funding Agency have been aware of the process and supportive of the stance taken by SPTA’s board.

The Inquiry Sub-Committee concluded that, based on the documentation and information received, the following recommendations were made and are being adopted:

It is evident that the Yorkshire Post article is a little light on heavy information and that the “Senior Leader” resignation may have had more to it than the Trust is willing to share with the public. The recommendations of the Committee suggest greater transgressions than are divulged by the Yorkshire Post article, and indeed seem to contradict some of the statements made by the Trust members themselves (in the YP article). They seem to indicate that wider historical concerns have been raised that are not explicit within the Committee’s statement. There are disparities, too, comparing either of these positions with that of Leeds City Councillor Lucinda YEADON, whose reference to “alleged financial irregularities” bespeaks something really quite sinister.

To sum that up (bold high-lighting is mine):

STPA Committee report on recommendations, from its website, says, re recommendation 5: “SPTA considers whether it is appropriate to appoint an independent, unrelated person as part of any recruitment, salary review or HR process, that involves the relative of a person employed within SPTA, to ensure no conflict of position or interest of either party.”

(2) The YP article states: “Leeds City Council had asked the SPTA to investigate a complaint about alleged financial irregularities at the academy chain’s founding school, Garforth Community College, before it became an academy in 2010.”

But Cllr Yeadon states in same article “As a result of concerns raised, we have looked at historic records for the academy and will now be asking the sponsors to investigate and notifying the Regional Schools Commissioner.”

“The SPTA spokesman said that the concerns referred on by Leeds City Council were looked into as part of the wider SPTA inquiry.”  But there is no mention in the SPTA Committee’s web-site statement about any recommendations re historical “difficulties” at Garforth Community College.

In short, there would appear to be a great deal more to the story than meets the casual eye – possibly extending way beyond non-declaration of interests, into an area “that involves the relative of a person employed within SPTA” (nepotism?)  and historical “financial irregularities” dating from pre-2010.

So, whilst the full laundry basket may not yet have been aired in public, and whilst we cannot know whether this was a voluntary act on the part of the Trust, or whether they were ‘pushed’ into action (or, indeed, whether or not my tentative congratulations may yet prove premature), the Committee has nevertheless undertaken an investigation the results of which bear some welcome hallmarks of openness. Not too many.

But notwithstanding these reservations, well done Mr HODSMAN, Ms BAILEY and Ms COX. The Trust appears to have instigated an investigation, the recommendations of which – good heavens – it has actually published into the public domain. How very refreshing.

Which brings me closer to home – and to North Yorkshire County Council.

I am reminded of the ‘investigations’ NYCC and Eskdale School’s Board of Governors conducted into the matter of Mike WARD’s (perceived) ‘difficulties’ regarding his political affiliations and his position as Chairman, which I reported last year here; the former Chair of Governors of Eskdale School was peremptorily ousted – and without any authority whatsoever – by the Headteacher, Sue WHELAN, on what would appear to have been NYCC’s specific advice and/or encouragement.

Let us examine NYCC’s attitude in relation to concerns I raised about Whitby schools’ employees’ and our local authority Officers’ actions and compare it with the Trust’s above.

For ease of reference, I remind readers that whilst Mike WARD’s treatment at the hands of the Headteacher was in and of itself ultra vires – oh, and just plain wrong – the story uncovered an altogether murkier backdrop.

I wrote to NYCC’s Head of Legal Barry KHAN in November 2014 asking him specifically to:

And I asked him to provide his evidence.

I remind readers of his reply on Christmas Eve 2014:

“I have found no evidence to state that County Hall entertained a visit from the Caedmon College Headteacher on the 10th October. There is no record of his attendance at County Hall in the registration book and no-one has a record of meeting him on that day.

… which, as I commented in the article at the time, was “rather unfortunate because, on 6th and 8th January 2015, I was able to provide information to Barry KHAN demonstrating that he was mistaken on all three of his firm assurances to me.”

I learned too, that he had subsequently, privately, confirmed the accuracy of my assertions. So someone, somewhere in public office, lied.

Over twelve months on, I am still waiting to hear back from Barry KHAN with his Decision Notices resolving my Formal Complaints; this following an amicable and lengthy conversation with Barry only a week or two before Christmas (2015), in which he promised me those Decision Notices “before the end of the year”.

I also refer to and quote the response from Eskdale School’s current Chair of Governors in connection with the outcome and subsequent recommendations of their purported ‘independent investigation’ into Mike WARD’s treatment in full.

Mike WARD has never received an apology – indeed no communication at all – from either the Governors or NYCC.

Shabby thanks, indeed, for some nine years selfless (and unpaid) service.

To paraphrase my original article: I present her [Sue VERRILL’s] crystalline response … “as an object lesson in evasion, secrecy, unaccountability and outright bullshit.” (How does she sleep?) 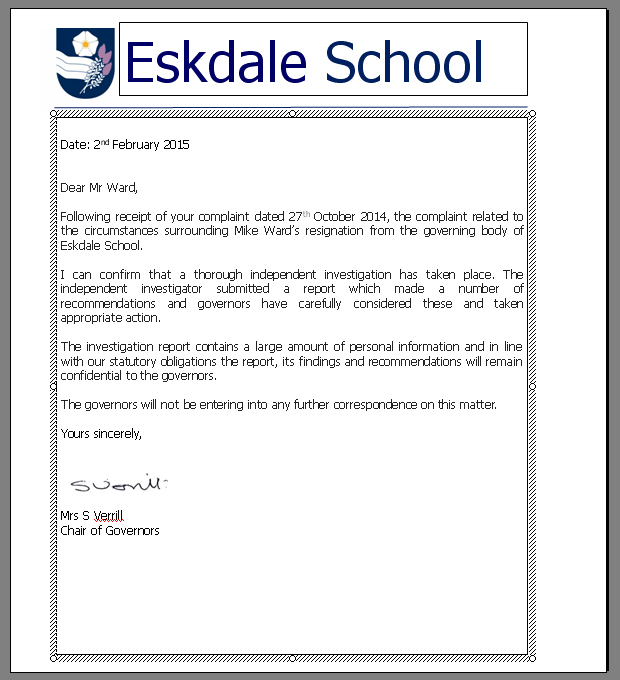 So what about it Barry? Some New Year cheer for me in this season of goodwill by way of those long-awaited Decision Notices?

And come on, Sue VERRILL! Grow some – and stop playing the NYCC stooge.

Or will I be writing the same article this time next year?

Meanwhile – and returning to SPTA – before submitting this article for publication, I asked SPTA to confirm or deny that Sir Paul EDWARDS has indeed resigned.

With only 38 minutes remaining to the expiry of my press-deadline, the best they could come up with was a re-iteration of their statement of 18th December 2015.

In short, SPTA does not deny that Sir Paul EDWARDS has resigned. Perhaps Sir Paul will be good enough to come clean?