On 24th February 2022, following publication of a Resolution taken at Cabinet on Tuesday 15th February, upholding a Leader’s Decision, the Scarborough News ran an article entitled “Scarborough Towns Fund: Milestone for £37m investment bid as ‘game-changer’ projects approved”. Approved by Cabinet, that is – not by the government. That is still to be achieved.

The article refers to Towns Fund bids made by the Council – for which Scarborough was awarded a shot at £20.2million and Whitby £17.1million. Nothing again for Filey. It is the Scarborough applications with which I am concerned here – numbered (i) through (vi) on the below Decision Notice (the remaining 4 are Whitby projects): 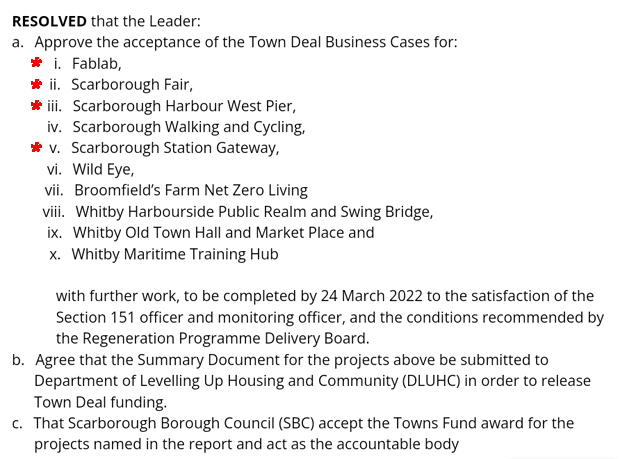 Four of these six are already the subject of intense critical scrutiny (marked with red asterisks), in consequence of which Councillor Alf ABBOTT [Unaff.] invited four Councillors to join him in a ‘call-in’ (for consideration by Full Council) of the Leader’s Decision – namely, Deputy Mayor Cllr Roxanne MURPHY [Y.C.I.A.] and Cllrs CHATT [C.I.M.], CROSS [Y.C.I.A.], HERITAGE [Y.C.I.A.].

In particular, outside of the Cabinet, no elected member has had sight of the Business Cases supporting these bids, or even plans and/or artist’s impressions, for £20.2million worth of funding for highly questionable projects, the real value of which have never been ‘sold’ to Councillors, or the press and public.

Due to delays contingent upon Officers working from home and the late publication of the Cabinet Decision Notice, the normal timescale for ‘call-ins’ was unavoidably protracted with the result that, on Thursday 24th February (the revised ‘closing day’), Councillor ABBOTT discovered that confirmation of Councillor HERITAGE’s participation had not yet been recorded. This presented a problem because Councillor HERITAGE was at work, where he is not permitted to access his own devices, including his Council i-Pad.

However, at approximately 16:47h, Democratic Services Officer Mr St.John HARRIS (effectively Clerk to the Council) informed Councillor ABBOTT, in a witnessed ‘speaker-phone’ conversation, that there would be no problem provided that Councillor HERITAGE confirmed his participation BY TEXT, as soon as he left work at 17:00h.

Further to your call-in of the above decision, I have referred your form to the Monitoring Officer and Chief Executive who have rejected your call-in on the grounds that Cllr Heritage’s support for the decision was communicated to me by text at 5.03pm thereby missing the stated deadline of 5pm on Thursday, 24 February.

[my highlighting in red]

In short, some time after the St.John HARRIS’s phone call of 16:47h and before his follow-up email of 17:27h, Monitoring Officer Mrs Lisa DIXON and CEO Mike GREENE moved the goalposts.

In my view, this almost certainly links to the Statement to Full Council (held the following day, Friday 25th February 2022) by Portfolio Holder for Inclusive Growth, Councillor Liz COLLING [Lab.], but not listed under Agenda Item 10 with the other five Cabinet Reports:

Readers will note that Councillor COLLING’s Statement is not listed on the Agenda and there is no download link for the associated PDF document.

Councillor COLLING’s Statement, not delivered (though later published on the website), is reproduced below, bearing my annotated comments in red script: 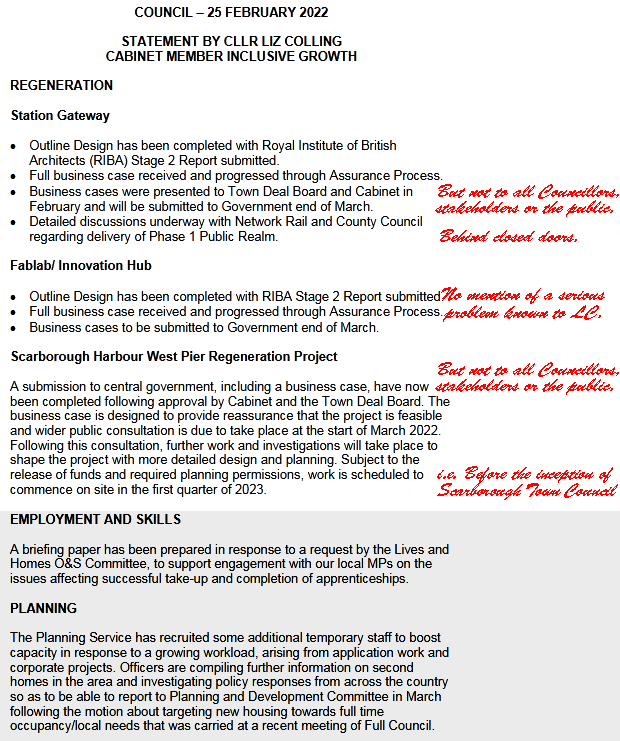 This Statement could hardly be sketchier. Clearly, rank-and-file members were wittingly and determinedly kept in the dark about the Business Cases, etc.

During the intervening weekend, on Sunday 27th February 2022, Councillor ABBOTT of course appealed the Council’s ridiculous about-face refusing the ‘call-in’ (despite Councillor HERITAGE having followed Mr HARRIS’s instructions to the letter).

Next, on Monday 28th February 2022 at 13:35h, the ‘call-in’ was duly confirmed by one of Mr HARRIS’s staff – from a non-Council email address (presumably in consequence of working from home). Back on again?

No. Then came another twist.

So now we have a Labour Council declining to allow a working man three minutes grace – having previously agreed to do so.

With £20.2million at stake, surely it would be prudent to embrace the most stringent degree of scrutiny. Was it really so vitally important to find a way to slam the door on Cllrs ABBOTT, CROSS, CHATT, R MURPHY and HERITAGE desire to allow all members to study the Business Plans in the public forum of the Council Chamber?

And nowhere in the Constitution can I find any prohibition against communication via text, which is no less legally binding than email.

Twenty million smackers and no-one is allowed to see the justification? Crazy.

One thing is clear. Mr GREENE would prefer to be known as ‘Three Minute Man‘ for the remainder of the Council’s existence than to allow either (i) elected members, (ii) members of the press and public, or (iii) [Heaven forbid!] Mr James CORRIGAN to scrutinise the basis on which this £20.2million is being claimed. Is there some aspect of the Towns Fund bid that is not entirely wholesome?

If these projects are so wonderfully justifiable, one would expect the Council to be trumpeting them from the rooftops. Instead, those Business Cases, drawings, plans, etc., are being squirrelled away as though they were evidence of fraud. Perhaps they are . . .

I believe I can offer a partial explanation as to why – as reported to me by two Councillors who witnessed the following turn of events.

Shortly before the Towns Fund (£3.6billion in grants to 101 “left behind” towns – the so-called “levelling up” initiative [see map at the foot of this page]) was publicly announced, a delegation from Westminster visited Scarborough to consider its suitability for Towns Fund support for its “High Street”. In company with the Leader, Senior Officers and a number of other members, the delegation proceeded from the Station down Westborough on a ‘walkabout’.

Having crossed St Nicholas Street / St Thomas Street, thence proceeding east down Newborough towards the ARGOS building, one of the delegates enquired as to where they were headed, since their progress seemed to be away from the town centre – the “High Street” (i.e. Westborough) – the proper target of the Towns Fund cash injections. When it was explained that they were heading towards the seafront and the Harbour, the decision was immediately taken to turn back towards Westborough, since the Towns Fund money was available strictly for the ‘regeneration’ of High Streets – and most definitely NOT for Harbours or seafronts.

This episode demonstrates to me that the secrecy in concealing the present Business Cases is informed by the fact that certain aspects of SBC’s Towns Fund applications are insufficiently robust to satisfy the scrutiny of more discerning members of Council. In my view, the SBC applications may even amount to a deliberate attempt to mislead Whitehall into granting the cash on false premises.

The applications are certainly deficient in another (even more important) aspect – the democratic one. I can find no convincing evidence that the requirements in respect of Community Engagement have ever been met. The Guidance published by the government in support of the statute is available for download here. For convenience of reference, I reproduce the section on Community Engagement here: 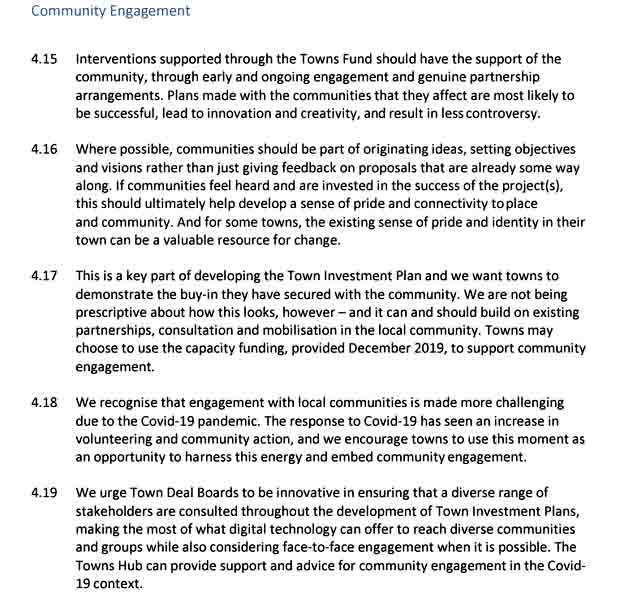 “The support of the community” [4.15] – “setting objectives and visions” [4.16] – “demonstrate the buy-in they have secured in the community” [4.17] – “harness energy and embed community engagement” [4.18] – “a diverse range of stakeholders” [4.19] . . . which reality does this administration inhabit? Alice’s Wonderland? Clearly not the reality inhabited by the residents of Castle Ward – the “community” whose support is supposedly fundamental to qualification for the Towns Fund.

The membership of the Scarborough Town Deal Board can be viewed here:

Can anyone confirm that even 20% of these people comprise the “community” mentioned above – or are even genuine Scarborians?

I can certainly uphold the view that 70% of them are well-known ‘self-interest’ merchants. To suggest that they are truly representative of the Scarborough town centre community (i.e. Castle Ward) – which has no more affection for the Harbour Masterplan, or the Station Gateway, than it did for the ARGOS pie-in-the-sky ‘regeneration’ proposal – is absurd. Scarborough Fair is another “no-no” on account of the Royal Charter (see my article “When is a Market NOT a Market”). And the FabLab project is already floundering –  if the words of the relevant Cabinet Portfolio Holder are to be trusted.

As I have opined before, it seems to me that everything this administration attempts, in these final months of SBC’s existence, is a desperate attempt to claw in cash from any available source, in preparation for the Judge’s gavel coming down on the Whitby Harbour and Scarborough Harbour mis-accounting (of revenue that should have been ring-fenced, but was siphoned off into the General Fund to balance a dysfunctional Budget) – to say nothing of the s.151 Officer’s highly irregular U-turn on the methodology of the Minimum Revenue Provision (MRP) accountancy of asset depreciation. All just juggling with numbers – except that the numbers represent ratepayers’ pounds.

I am a poor man. Were I wealthy, I would commission a top London solicitor to instruct a first-rate Barrister – ideally, a QC – to prepare a report for the attention of the Secretary of State. 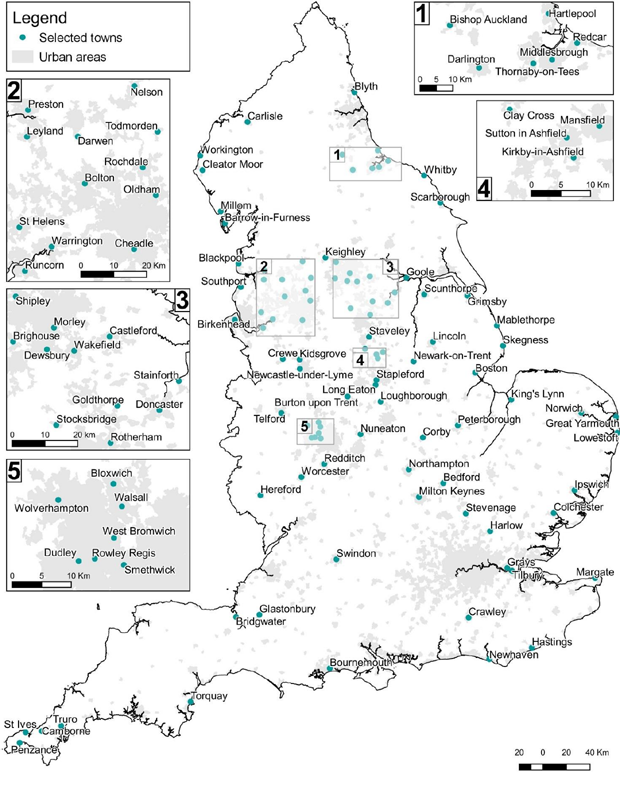 Beneficiaries of the Towns Fund