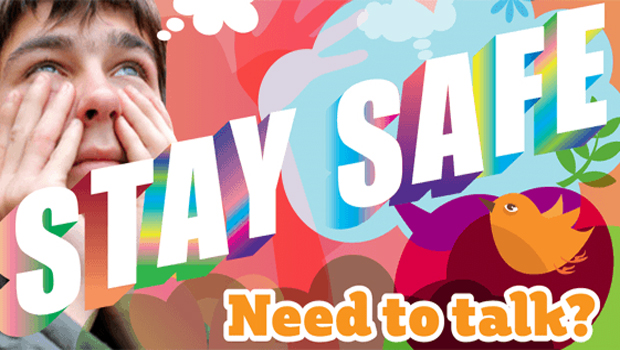 In recent times, and particularly in the aftermath of the legal action mounted by the North Yorkshire Police against me and my fellow NYE contributor Tim HICKS, an unprecedented amount of information has come our way.

Much of that information has been anonymous. Some of it has been provided by informants on the condition of guaranteed anonymity.

Some of it may be hearsay.

Some of it may be simply untrue, motivated by honest misunderstanding, malice, or even vengeance.

Some of it is almost impossible to corroborate. But some of it is corroborated, at least circumstantially, by others sources – sometimes multiple independent sources.

The burden of responsibility that rests upon citizen-journalists to publish only that which is proven is a heavy one, since there exists more than one standard of proof.

Civil law requires proof of a lesser degree of certainty – “on the balance of probabilities”.

But what are we to do in circumstances where a strong possibility that allegations are true does not meet either of these standards, but nevertheless, there is a risk in doing nothing and that risk is in itself unacceptable?

So on 22nd February 2015, I decided to approach Barry KHAN, the Deputy Chief Executive and Head of Legal and Democratic Services at North Yorkshire County Council (NYCC) – the Local Education Authority for North Yorkshire. I wanted to alert him to the serious allegations that I had received and the most direct way I could summarise the information was to present Barry KHAN with a scan of just one of the letters which had come my way.

I present it here in heavily redacted form, since the letter identifies specific individuals as well as alleging institutional collusion or cover-up. 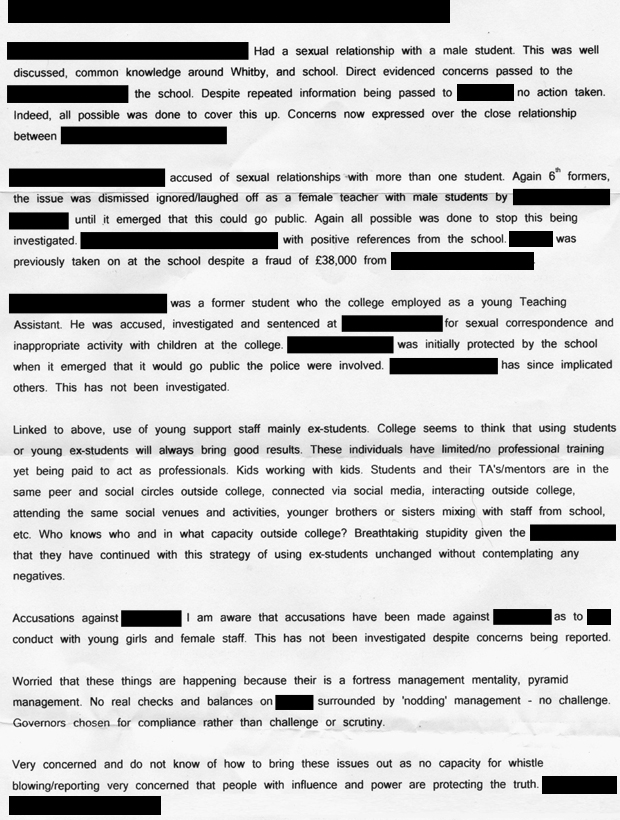 On 7th March 2015, Barry KHAN visited me in Whitby to discuss a way forward. It was my contention that even without complaints from individuals directly involved in these alleged improper sexual relationships, there was (and is) a clear need for an investigation – both to safeguard youngsters and to ameliorate any risk of further improper conduct amounting to a breach of parents’ trust and potential failures of the schools’ Duty of Care.

Barry KHAN (with whom I have engaged previously) appeared genuinely concerned and recommended that I should meet with Dave PEAT, the Education Safeguarding Manager / LADO for North Yorkshire.

Dave PEAT visited me in Whitby on 20th April 2015. I was disappointed at the amount of time that had elapsed since my email to Barry KHAN on 22nd February 2015, but gratified that the prospect of investigation was now at last on the agenda.

Dave PEAT explained to me (and I was accompanied by former Scarborough Borough Councillor Mike WARD for the first half of the meeting) that, following an alert from OFSTED (the Office for Standards in Education, Children’s Services and Skills), four allegations of a very similar nature had already been subject to investigation – resulting in one successful prosecution (not reported in the local press), and one outright dismissal.

But two of the four allegations remain unresolved.

Dave PEAT went on to explain that, though suspects had been interviewed (and had strenuously denied the allegations), without the testimony of a ‘victim’ (who may, even if identified, also deny involvement in any impropriety out of perceived loyalty), there was little more that could be done. Without a signed statement of complaint, Dave PEAT’s hands are tied; without rock-solid ‘beyond reasonable doubt’ evidence, the Local Education Authority could find itself on the wrong end of some very expensive legal action.

One is left with the impression that the risk of litigation carries more weight than the duty to safeguard the kids.

Concerns have been raised that a more vigorous approach to safeguarding issues needs to be adopted here in North Yorkshire.

But the following extract from an article in the Huddersfield Examiner demonstrates that pre-emptive measures can be taken.

A spokesman for the Department for Education said:

“There was no evidence to suggest that Mr Green was acting under duress, and in fact the panel found the teacher’s actions to be deliberate and motivated.”

“Accordingly they [the panel] recommend that the order should be without the opportunity for Mr Green to apply to have it set aside. I agree with their recommendation.”

“This means that Mr Andrew Green is prohibited from teaching indefinitely and cannot teach in any school, sixth form college, relevant youth accommodation or children’s home in England.”

“Shelley College principal John McNally said if Mr Green hadn’t retired he would have been dismissed.”

That last sentence is reminiscent of the way in which Police Officers have so often managed to escape justice and walk away with a tidy pension. The victims, meanwhile, may be emotionally scarred for life.

Deeply disturbing is the fact that there are, in the “whistle-blower” letter that I have cited above, quite a number of unresolved issues that suggest collusion and cover-up to protect either (a) the careers of certain individuals, and/or (b) the reputation of the schools and the administrators. I here present the same scan with a number of passages high-lighted – passages which offer some clue to the wider issues which merit investigation: 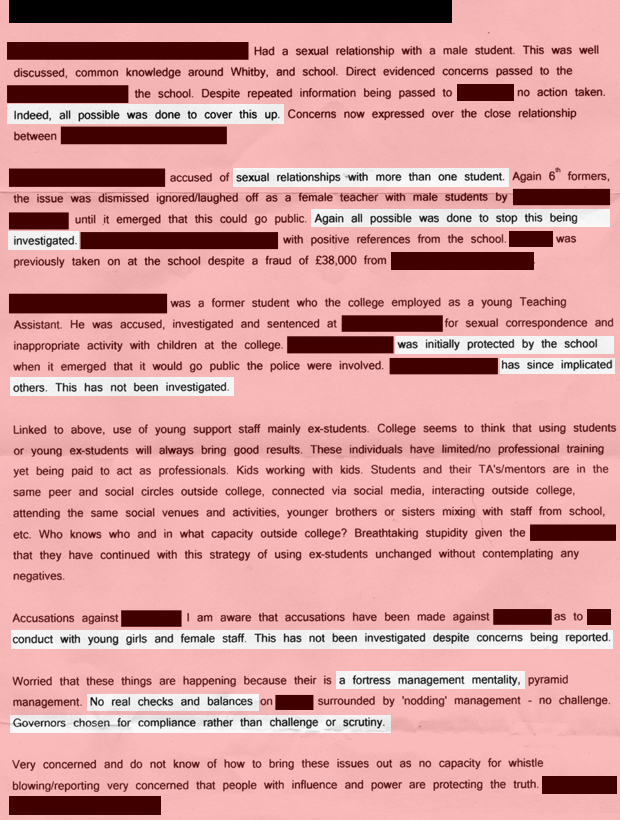 These circumstance are of a different order of magnitude to the Huddersfield case. Clearly, there is a need for a far deeper investigation of circumstances in the Whitby schools.

In fairness, the difficulties facing Dave PEAT and his Safeguarding Team are magnified by the prevailing mistrust and distrust of local authorities following the Rochdale and Rotherham child sexual abuse scandals.

Readers will immediately recognise what I can best describe as the legacy of suspicion, here in North Yorkshire, brought about by the Jimmy SAVILE/Peter JACONELLI disclosures, whereby scores of victims have been reluctant to place their faith in the authorities, having made complaints in the past and been disbelieved and often vigorously dissuaded, intimidated or even threatened into withdrawing their complaints.

Having experienced threats myself (on more than one occasion) as a result of my exposés, I have great empathy with them.

Unsurprisingly, this has resulted in a widespread lack of confidence in the authorities, often amounting to outright distrust. And the prospect of giving evidence in a court of law – never inviting – can, in itself be forbidding prospect, especially for a youngster already in the throes of emotional turmoil.

The present “anti-whistle-blower” climate is harsh indeed and is entirely responsible for the fact that victims are far more trusting of the Enquirer than of the authorities – and then only under absolute guarantee of anonymity.

Nevertheless, I was satisfied that Dave PEAT was completely sincere in his commitment to safeguarding Whitby youngsters, albeit constrained by the limitations to his powers of investigation and the legal risk-assessment mind-set, as well as the aforementioned widespread mistrust of the authorities.

In consequence, and in a very real sense, Dave PEAT has left at least part of the ball in our court. Please help us run with it.

Student (past and present), parents, teachers, mentors (teaching assistants) and school staff may be able to provide information on which Dave PEAT and his team can take pre-emptive action to safeguard Whitby youngsters.

The Enquirer is able to guarantee absolute anonymity to people of good conscience, who can provide information via the Enquirer without their identities being disclosed to the authorities, by emailing us at the following email address, marking the subject-line:

Your information will be stripped of all identifying features before being passed to Dave PEAT at the Education Safeguarding Team.

If you would prefer to deliver your information personally to me, please use your email to request a meeting.

Teaching professionals are legally bound to a stringent code of conduct. Most teachers adhere to that code with great integrity and reliability. However, some abuse their positions of trust.

If you do have information but choose to remain silent, remember that your silence leaves rogue teachers/mentors free to continue abusing their positions of trust, just as surely as the silence of rogue Councillors and Police Officers allowed Jimmy SAVILE and Peter JACONELLI to continue offending and inflicting trauma on generations of youngsters in the Scarborough area. Such silence comes perilously close to complicity.

We rely on you to assist us if you possibly can. Thank you.

The issue of safeguarding is highlighted by the following report in the Scarborough News, dated Monday 11th May 2015 – just yesterday: