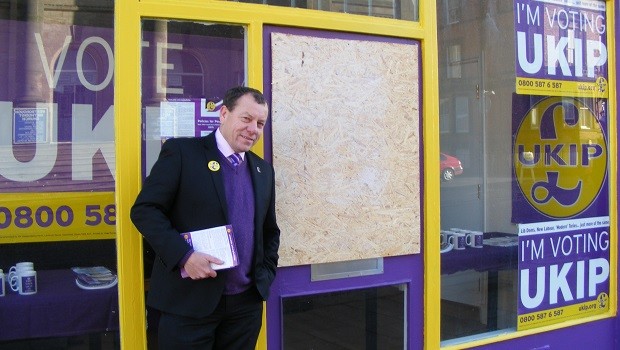 UKIP’s Scarborough and Whitby branch members awoke to find their shop, which they had been busily preparing for an official opening in February, had been attacked.

A lump of concrete has been thrown through the shop window in what appears to be an act of vandalism. The attack is thought to be politically motivated as no other nearby shops were attacked.

Our hard working local members have done an excellent job preparing the new UKIP office. The office is there so members of the public can come in and talk to us about local issues. We currently have five councillors on Scarborough Borough Council and we are seeking many more so that we can have serious input into how the council is being run.

Sam is bidding to unseat incumbent Conservative MP Robert Goodwill. With many locals unhappy that Goodwill, a minister at the DfT, has failed to bring about any meaningful improvements to the A64 corridor to improve journey times for his constituents, the seat looks an interesting one to watch in the May 7th General Election.