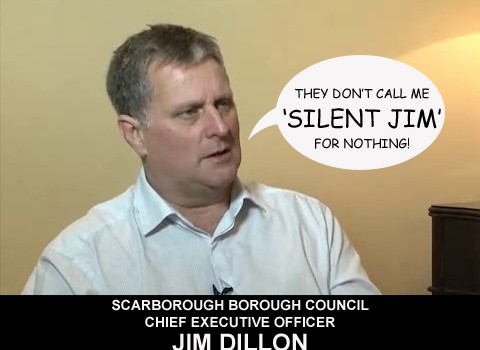 A full Council meeting for Scarborough Borough Council (SBC) is scheduled for 2pm on Monday 12th May 2014. Amongst items on the agenda is a motion by Cllr Tom Fox, seconded by Cllr Derek Bastiman, to posthumously strip civic honours from Peter Jaconelli.

The former-Mayor and honorary Alderman of the Borough’s name is to be removed from honours boards and the Council and successive Councils will not endorse or support such matters as memorials, street and/or property naming or other high recognition, office or award in his memory.

I was curious of how many of the current crop of long-serving Councillors and which notable names in the Scarborough political scene of yesteryear had actually voted to bestow the honour of Alderman on Peter Jaconelli in 1996.

An FOI request was sent to SBC, and acknowledged, but it was ultimately ignored, despite a timely reminder. Par for the course from our non-responsive Council it seems.

The Information Commissioner’s Office will be adding another black mark to the Council’s file in due course, despite the Council taking steps to ensure the prompt answering of FOI requests.

What are the requirements to become an Alderman of the Borough of Scarborough? According to an old FOI request, it seems the title is conferred upon those who have completed sixteen years service as a Borough Councillor.

If any of the current crop of long-serving Councillors have served continuously since 1996, they themselves would be overdue the civic honour. The full Council also votes on the matter, but it is thought that two-thirds of the Council has to vote for the honour rather than the usual majority decision at a Council meeting, although no documentation could be found to support this.

Perusing the list of Councillors it seems a number are overdue the honour of Alderman, but perhaps serving Councillors are made to wait until they leave office.

It is interesting to note that Cllr Derek Bastiman, who is seconding the motion to remove civic honours from Peter Jaconelli, could have been one of eight serving Councillors who may have voted to bestow the Alderman civic honour back in 1996. The vast number of rumours circulating Scarborough about Jaconelli’s offending must not have made it as far north as Scalby Road!

Getting information out of Scarborough Borough Council has generally been a lengthy task. The Jaconelli allegations, along with the request to remove his civic honours, were first reported to Jim Dillon, the Chief Executive and Head of Paid Service at Scarborough Borough Council, by e-mail on the 13th February 2013, and shortly afterwards, to all members of the Council.

The Council Procedure Rules are clear on the role of the Chief Executive. The Chief Executive must report to full Council on any questions received or announcements resulting from other communications.

The Chief Executive has failed to carry out his duties six times. Only when the BBC aired the Inside Out show on the 10th February 2014 featuring content from the site, which included a segment about Peter Jaconelli, did the matter of the removal of civic honours make it onto the full Council agenda on February 28th 2014.

Shortly after that Council meeting, I asked Jim Dillon, CCing his Monitoring Officer, why he had not apprised the full Council of the request to remove civic honours from Peter Jaconelli:

An e-mail was sent to you on the 13th February 2013 from a Trevor Harrington requesting that the civic honours awarded to Peter Jaconelli should be removed by the Council. The same e-mail was forwarded to all current Borough Councillors a short while after.

The Council Procedure Rules are very clear on the matter of questions to the Chief Executive. Having reviewed the scope of questions that can be submitted, it doesn’t appear to me that there is a good reason for not communicating that request officially at the next full Council meeting.

What does Jim Dillon have to say about the matter in hand? Nothing officially so far. ‘Silent’ Jim has been completely non-responsive to the e-mailed question.

Perhaps the Monitoring Officer would step in, perform her public duty, for which she is handsomely paid, and hold the Chief Executive to account over the apparent breach of Council Procedure Rules? Nothing official from the Monitoring Officer so far. She appears to have been completely non-responsive to the complaint too.

So who else will step up to the plate and hold the Chief Executive to account? Perhaps one of our many upstanding Councillors will step out of line and loosen Jim’s tongue?

Only a year to go until the elections, guys…