Jim DILLON has today announced his intention to leave Scarborough Borough Council at the end of June. There will be no sense of surprise at the Enquirer. 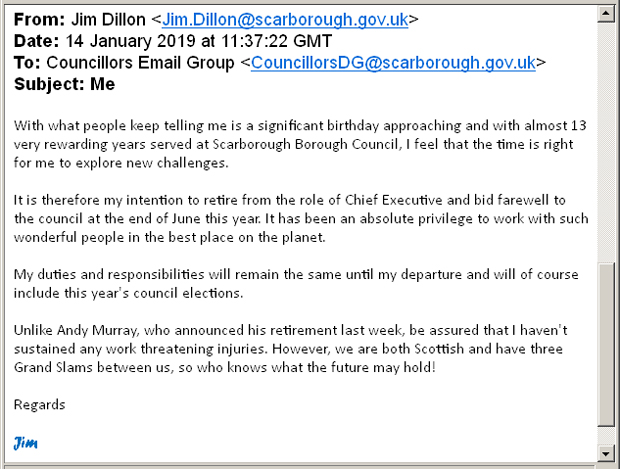 Under pressure by elected members for information on his disbarment of Councillor Michelle DONOHUE-MONCRIEFF [Ind.], SBC Chief Executive Jim DILLON finally arrived at a nice little ruse; commissioning a solicitor directly involved in the Harvey -v- Ledbury case to brief the Councillors on the legal technicalities of the respective duties of a principal Council’s Standards Committee, on the one hand, and its Head of Paid Service, on the other.

This would, of course, shut them up – and, since Mr Jonathan GOOLDEN of Wilkins Chapman LLP could only answer questions in the most general terms (in order not to fall foul of personal data regulations), the Officers could continue to withhold vital information from members, whilst pretending to have provided that information via the briefing. Case closed.

Well, that seems to have been the plan, but it has all gone awry – as disingenuousness often does.

Early in December 2018, having clearly been instructed to major on what the Localism Act does not regulate, Mr GOOLDEN briefed those Councillors who showed up (less than half), dutifully emphasising that Councils can, in an emergency, take immediate “measures” to contain a specific and imminent threat. These emergency  “measures” are lawful under an entirely separate authorisation, in no way to be regarded as an available alternative to “sanctions” imposed by a Standards Committee under the authorisation of the Localism Act 2011.

The question arising is this:

“What is a CEO to do when faced with a Councillor entering the Town Hall strapped into a suicide vest and brandishing a semi-automatic assault rifle?”

He can hardly say,

“Councillor, forgive me for pointing out that entering the Council Chamber carrying Semtex and a Kalashnikov may amount to a breach of the Councillors’ Code of Conduct. I have no alternative but to refer you for investigation by the Monitoring Officer and the Independent Person, which may, in six or eight months time, result in a Hearing before the Standards Committee, which, in turn – and in the rare event that a complaint is actually upheld – may result in the imposition of certain minimal sanctions against you. Meanwhile, please do come along in.”

Commonsense dictates that someone must have powers to effect an immediate intervention in cases of genuine emergency. In the case of a Council, that ‘someone’ must surely be the Chief Executive Officer – or, perhaps, the Leader (who at least has an electoral mandate).

Obviously, in cases of clear and present danger, immediate action is required. This, according to Mr DILLON, is what he has done – he simply responded to a perceived urgent threat (of course, one without an assault rifle or IED).

What he has not explained – and this is crucial – is why he allowed SEVENTEEN DAYS to elapse between the perceived threat and his action to prohibit Councillor DONOHUE-MONCRIEFF from attending Council and Committee meetings, or contacting SBC Officers (though what danger “contacting SBC Officers” could conceivably have entailed has never been explained).

Having listened to the audio of MR GOOLDEN’s briefing and Q&A, and having examined his PowerPoint Presentation, I have seen nothing to suggest that a correct interpretation of the law would support the notion that immediate emergency “measures” to mitigate an imminent clear and present danger could be implemented SEVENTEEN DAYS after the event. That would be tantamount to claiming that seventeen days is a reasonable and acceptable response time for emergency services such as the North Yorkshire Fire & Rescue Service, or the Coastguard, or the Air Ambulance.

Mr DILLON’s action was not taken in the heat of the action; it was taken after a great deal of dither time. By the time his prohibition was finally transmitted to Councillor DONOHUE-MONCRIEFF (on the last working day before the next Full Council meeting), any notional “emergency” powers had long since dissipated and the only lawful alternative was a referral to the Standards Committee, the Monitoring Officer and the Independent Person – which never took place.

The much-debated legal advice confirmed only that the CEO – responsible for the safety of everyone in the Town Hall – did have the powers to act in an “emergency”. No-one had disputed that.

Unfortunately, the Chief Executive’s obvious contempt for the basic intelligence of members has led him to miscalculate, once again. Did he not think they were capable of asking searching questions? But ask they did.

Equally unfortunately, the members may not to have grasped the significance of the answers they received.

Under members’ cross-examination, the true position emerged. Yes, a CEO can take immediate and temporary “measures” to ensure security, but he MUST then refer the matter to the Police or Standards process to fully investigate and, if necessary, to uphold the “measure” and ratify it as a “sanction”, under powers vested in the Standards Committee by the Localism Act 2011. Even then, the sanctions available to the Standards Committee fall far short of Mr DILLON’s total prohibition.

Again unfortunately, no member challenged the matter of the CEO dragging his heels for SEVENTEEN DAYS – a delay that gives the lie to any pretence of urgency.

So, on the face of it, Mr DILLON has been widely misperceived to have been vindicated by Mr GOOLDEN. Nothing to see here, folks – keep shopping. Vast quantities of Council Tax-payers’ money have been spent in defence of the beleaguered CEO and members can now let the matter go – when they should be letting Mr DILLON go.

How much cheaper it would have been just to give members the legal advice spelling out these vital legal distinctions when Councillor Tony RANDERSON first requested sight of the advice six months ago. It can hardly be said to be controversial. Unless, of course, there was no imminent threat at the time, in which case, the CEO had no powers in the matter whatsoever, as has been thoroughly explicated by the Enquirer.

So the crux, once again, became this: On precisely what points of law did Mr DILLON seek advice? A real and immediate danger – or an unconfirmed perception of a possible threat, since which seventeen days without incident were allowed to elapse?

It follows, in my opinion, that the CEO’s “measures” were not in response to an immediate threat and are therefore not compliant with the requirements. And by that simple fact, Mr DILLON is, and remains, undone.

In simple terms, emergency “measures” can be taken – but only when immediate and proportionate, and not in the circumstances or manner in which they were mobilised by Mr DILLON.

The proper legal procedure, as explained by Mr GOOLDEN, was ignored and instead replaced by Mr DILLON’s ‘back-of-a-fag-packet’ ad hoc process. Even the misperception of danger was long past. The “measures” were not immediate, proportionate, relevant or properly reviewed. The Independent Person was not involved. There was no investigation. The Standards Committee were not involved in upholding or overturning the “measures”. There was no oversight. The whole thing was a crock.

In my view, therefore, Mr DILLON’s carefully contrived ruse to sweep the matter under the carpet may yet founder. But a legal challenge is rather unlikely; who would fund it – even in the confident opinion that the Judge would not entertain a seventeen day delay as a credible emergency “measure”? Not I.

However, the matter will be dismissed as academic – Mr DILLON will be leaving the Council at the end of June, having overseen the local elections in May, for which he is the Returning Officer.

Alas, he will leave with at least the appearance of an unblemished record, without hint of him ever having overstepped a line. Enquirer readers will know better.