The criticism most frequently levelled by Scarborough Borough Councillors against their own Council (SBC) is that it is ‘Officer-led’. This is a euphemistic turn of phrase, the meaning of which is actually that Councillors have little or no input into the overall direction that the Council adopts, other than reactively – as opposed to pro-actively. Even in this reactive mode, they are hamstrung by ‘the party line’.

The truth, of course, is that a small group of Executive Officers, together with core members of Councillor Tom FOX’s hand-picked Cabinet, assume a more or less autonomous rôle in directing precisely which major projects and corporate actions the Council ultimately pursues.

Local readers will recall the abysmal failures (in terms both financial and in the quality of local services and amenities) of its various forays into commercial life; the Sands development, the proposed sale of the Town Hall (and concomitant acquisition of a derelict out-of-town office-block), the Open Air Theatre, the exploitation of the “miraculous windfall” opportunity of the Dogger Bank wind-farm, and so on. These (and more) on-going failures are continually off-set by an increasingly aggressive strategy in relation to revenue – increases in parking-charges, berthing, rents and concessions – accompanied by equally aggressive policy prohibition, licensing, ‘fines’, prosecutions and legal actions.

In short, SBC – or rather this small cadre of Executive Officers and ‘leading’ Cabinet Portfolio Holders – has been playing a private game of Monopoly with the public purse, rather badly, and shoring up its coffers by squeezing to the bone the general public, the public by whom they have been entrusted with the duty to serve.

Although it is true that the Council (both the body corporate and the body electoral) is a person*, it is important to remember that this person is comprised of a number of individual human beings. Fallible human beings – if that is not a tautology.

[*– legally speaking, a person is any being whom the law regards as capable of rights and duties].

Which brings me to my own most frequent criticism of the Council – and Scarborough Borough Council is by no means the only Local Authority against whom I would level this criticism – namely, that the Council appears to be innately incapable of acknowledging that mistakes have been made and, on occasion, serious wrong-doing and even criminality has taken place.

In their determination never to ‘fess up’ to anything – which must necessarily entail conceal wrong-doing – they have ignored fully-documented Formal Complaints in the public interest and Freedom of Information requests (including my own Subject Access Request), and have even U-turned on their own official position. SBC is presently pursuing an evasion policy with regard to the due processes of accountability.

Their engagement with the public is restricted to opaque correspondence couched in a sort of pseudo-legalese. For those readers who are unsure of the meaning of the term ‘legalese’, the Free Dictionary provides the following definition:

The specialized vocabulary of the legal profession, especially when considered to be complex or abstruse.

My own legal dictionary quotes Thomas Jefferson on ‘legalese’, in the following terms:

“. . . their multiplied efforts at certainty, saids and aforesaids, by ors and ands, to make them more plain, are really more perplexed and incomprehensible, not only to common readers, but to the lawyers themselves.”

Essentially, legalese is the language of bluff and bluster. The true nature and message of these Council letters, written in pseudo-legalese, is that they bellow and scream “We know the law – you don’t – and we will use its full might (paid for from public money) to intimidate you into withdrawing from any contention with the Council”.

In my view, that is a totally unacceptable message, coming as it does from those who are duty-bound to serve, not to dominate. It is tantamount to institutionalized legal bullying:

“Legal bullying is the bringing of a vexatious legal action to control and punish a person. Legal bullying can often take the form of frivolous, repetitive, or burdensome lawsuits brought to intimidate the defendant into submitting to the litigant’s request, not because of the legal merit of the litigant’s position, but principally due to the defendant’s inability to maintain the legal battle.”    [Wikipedia]

SBC v Real Whitby and Members of the Public

Regular readers will have discerned that I am coming now to the threat of legal action against Real Whitby and its main contributors, instigated by SBC’s Director of Democratic & Legal Services Lisa DIXON, back on 26th March 2013.

Since then, the Cabinet has convened twice without being able, it would seem, to circumvent the requirement for all Members to declare any personal and/or prejudicial interest in the matter, as occasioned by the past conduct of all bar one of them – Councillor David CHANCE (Con) – because, as ‘double-dippers’ (of whichever stripe) whose personal loss of dignity and credibility (as reflected in the local and national press, where they have been roundly and quite rightly lambasted), has arguably brought themselves and their Council into disrepute, clearly they have a personal and prejudicial interest in stifling further criticism.

To some degree, the same dilemma faces Lisa DIXON herself, in virtue of the acute embarrassment she has incurred through her abject failure as Monitoring Officer to the North York Moors National Park Authority – a failure that has necessitated the referral to the North Yorkshire Police of a prima facie suspicion that some variation on ‘insider dealing’ has taken place in regard to the York Potash Ltd planning application. She, too, is widely viewed as having brought herself and her two authorities into disrepute.

Unsurprisingly, SBC has failed to confirm who (if anyone) authorised the letters-before-action that Lisa DIXON wrote to Real Whitby and its main contributors.

And, curiously, Lisa DIXON has even ignored several requests from a member of the public to provide the definition of the term ‘disrepute’ upon which the Council relies, as appears in the Code of Conduct:

Consequently, it is small wonder that the SBC Cabinet has now deferred the matter of the threatened legal action – first from 23rd April until 21st May 2013, and most recently from 21st May to 17th September (four months into the future, and six months after the original abortive attempt to terminate the Real Whitby website).

But the matter will not rest there.

It must be remembered that in order for a statement to be adjudged defamatory, it must be demonstrable that it was both untrue and was known to be untrue by its author.

Expressed conversely, a statement of TRUTH, or of FAIR COMMENT (believed to be the truth at the time of publication), cannot be defamatory.

It is now over ten weeks since Lisa DIXON’s threatening letters; during which time she has thus far proved unable even to indicate (i) which statements, (ii) in which articles, (ii) by which author she alleges to be defamatory – i.e. untrue and published in the knowledge that they were untrue.

Thus, SBC, as claimants, would be well-advised to reflect very carefully before squandering tens or even hundreds of thousands of pounds on a lost cause that can only drag the Council into further public disgrace – the more especially so when those pounds come from the public purse.

But here we come full circle, for we are back at the point where I began: the Council appears incapable of admitting errors of judgment, commercial folly or moral turpitude such as the ‘double-dipping’, the failure to declare disclosable interests, the witting propagation of disinformation or any of the abuses of position that have been meticulously documented on Real Whitby.

This aggressive/defensive posturing begins at the top and permeates the management layers of the Council, paid public servants and elected members alike, like a malignant tumour. Its root cause is an unacknowledged fear of being seen to be unequal to the real-world demands of playing corporate Monopoly with the public purse.

Metaphorically speaking, the Emperor knows only too well that he is naked and cringes at finding himself exposed by the spotlight of serious scrutiny.

Why else would our anti-corruption campaign elicit such hostility?

Under a more confident, competent and less tainted leadership, the Council might perhaps discern the wisdom of engaging with the anti-corruption lobby with a view to fulfilling the worthy aspiration to attain acceptable standards of conduct within the Council – in line with the Nolan Principles.

I close now by expressing my thanks for all the messages of support, both here and on the social-media network, by email and phone, and not forgetting the local people who have provided so much information. I can promise you that we will not succumb to corporate bullying and we will continue to publish the truth as we know it. The truth is unassailable in law, as in life.

“Who is monitoring the Monitoring Officers?” 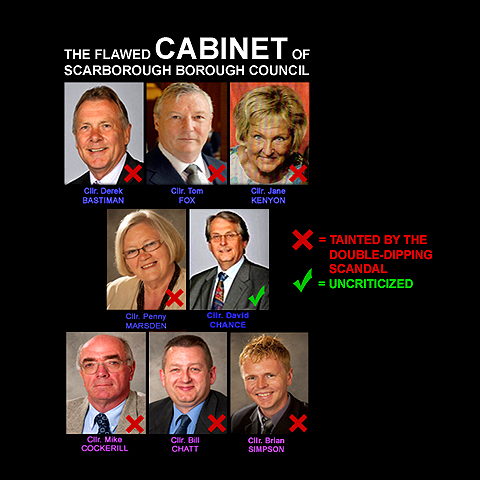