On the 14th May 2018 elected members of Scarborough Borough Council (SBC) voted to hand a whopping £30million to Senior Officers at the Council to spend as part of the Commercial Property Investment Strategy.

Bradley’s skilful proposal essentially gave Senior Officers at the Council a £30million Blank Cheque to spend how they pleased with no further oversight from any elected members required. Clueless Clown Councillors!

The first oversight free purchase from the £30million pot of taxpayer’s money was made on 14th September 2018. A Director’s Urgent Decision was made by former Brighton binman Richard Bradley when he solely purchased the St Nicholas Hotel for a sum of £14million, which was sold for £7.3million less than a year earlier. 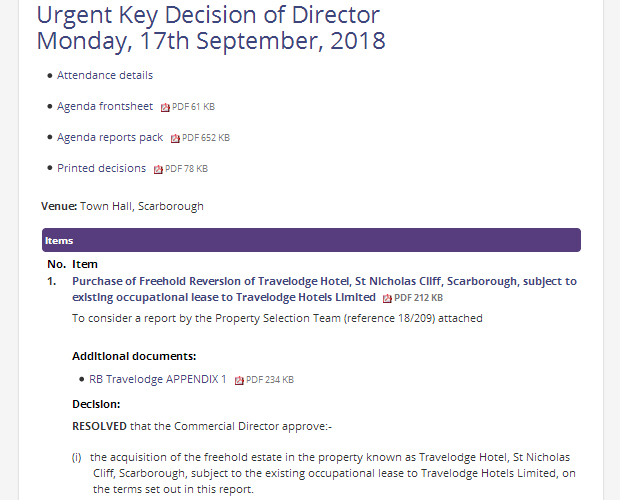 If any of the elected members had looked at the £14million deal to buy the St Nicholas Hotel and thought it was a spectacularly bad investment, SBC’s Senior Officers had steered the motion through the council in such a way that the elected members couldn’t stop it if they tried. Well done chaps, we’ve been well done.

Can you remember the last time SBC achieved a return from a major investment with our money? Me neither.

There was no recorded vote for the £30million Blank Cheque, even though the sum being voted upon is around one third of the Council’s £90million annual budget.

I thought it would be prudent to start asking current councillors about their 2018 decision and why they thought giving Senior Officers a £30million Blank Cheque was such a spiffing idea.

I’m not expecting any will answer as they are always shy when it come to commenting on their bad decisions and Legal Director Lyin’ Lisa Dixon is still intercepting any emails I send their way. If any reply, I will update the table.