A Letter to the Editor from Mike WARD, sharing his response to the letter from Robert GOODWILL MP (Scarborough & Whitby[Con.]) to Nigel WARD, seeking clarification of the on-going Councillor  Jane KENYON scandal.

For the avoidance of doubt, Mike WARD and Nigel WARD are not even distantly related to one another.

Those who follow football like myself, an ardent Liverpool fan, will know what a vote of confidence means in a manager’s career.

I am not sure if the same applies in politics but maybe you, having spoken to the Police Authority, NYCC and SBC before giving Councillor Kenyon your vote of confidence, can now give us,your constituents, some answers to the many questions that are being asked at this time.

You say the allegations on the Real Whitby site and in Private Eye are unsubstantiated. To which allegations are you referring? Are you and others just looking at the issues surrounding Declarations of Interest when expressing a vote of confidence or have all the various allegations now been fully investigated?

Have you spoken to the Vicar’s wife whose story has been told and who I believe might, at least at one time, also have been one of your constituents?

Who was called on to provide any documents that have been referred to or to give evidence to an enquiry?

Are there any concerns in your opinion or possible grounds for an enquiry?

Surely even those who are referred to in the ongoing articles should themselves be asking for an enquiry if there hasn’t been one so they can put the record straight and/or give their side of any story.

You say some of the claims are vindictive. What have you seen to substantiate this? I have read nothing to suggest that those writing the articles on the Real Whitby site have a ‘strong or unreasoning desire for revenge’ (Oxford Dictionary definition).

I have spoken to Nigel Ward and do not see him as vindicative. I might accept some of those who may have suffered or lost money through the alleged offences and who are now providing the possible evidence to those writing the stories might well have cause for complaint.

However those who you might expect to take up the complaints seem to be remaining silent; hence the articles. All the journalists involved seem to be simply presenting the facts as they see them.

They would, I’m sure, willingly publish, as they did with your letter giving the vote of confidence, any counter claims/arguments.

Apparently there is nothing wrong in the way declarations have been made in the eyes of the Legal Departments of both councils, though this does appear to go against the facts as presented.

It would be in everyone’s interest to hear the legal arguments for reaching that conclusion.

However surely there are other issues which need to be examined in far greater detail. Has there been any conflict of interest? Has any local party, business or public authority suffered because of these alleged offences?

Has anything been done to put the integrity of those involved into question? Is there any truth in the allegations being made?

Do other Councillors and Officers have concerns? Aren’t you and the Councils concerned about public opinion? Are both Councils and all Councillors possibly allowing themselves, along with the Conservative Party, to be brought into disrepute? Can the alleged offences, if correct, be condoned?

I have no personal issues with anyone involved but I do have concerns with what I am reading.

I acknowledge the many good things that Councillor Kenyon has done in the community and when a councillor myself I voted in the same way on a number of key issues debated in the Chamber of SBC.

Yes I stood against her, as an Independent, at the NYCC elections, for the Ward in which I live, but that was because of my dislike of Party Politics especially at the local level. All parties are capable sometimes of having good ideas and they should be supported regardless of Party.

Surely with the evidence being presented the actions of those in public positions have to be examined to see if they have been in line with Nolan’s 7 Principles of Public Life Selflessness, Integrity, Objectivity, Accountability, Openness, Honesty and Leadership.

Some Councillors serving on more than one Council have apparantly received double payments for their broadband connection.

This is now being investigated by the Standards Committee. Those only serving on two bodies since 2009 could possibly be forgiven for failing to realise as the Councillor’s Allowance was not broken down but before 2009 the broadband allowance was itemised on the payment slip. Do you condone a double claim on the public purse.

Only a few hundred pounds a year but still not justified or earned. Wouldn’t you encourage those who have been paid twice for the same service to repay that amount even before any enquiry or do you believe those in authority might simply find a way of fudging the issue ?

Councillors in general do their best to ensure they are acting in the interest of those who put them in that position.

However the allegations, like the expenses scandel surrounding MPs, are reflecting badly on everyone, including your Party.

Are the complaints true or false? If there are no answers or a response of any kind conclusions are bound to be drawn – no smoke without fire etc etc. – and the issue will not go away.

Denial or acceptance of the facts is the least one might expect.

Why not say there is no truth in any of the allegations or yes some, most/everything is factually correct and offer an apology for what has occurred in the past. It is never a crime to say sorry and apologise especially if anyone has suffered.

There seems to be so much being said/inferred about various issues with no comment or statement from those who serve.

The Council Officers and Councillors are public servants who are there to serve the residents and are answerable to them. There is a need to keep the public informed.

We rely on those in positions of authority to spend our money wisely and as any good councillor will tell you certainly not for personal gain or private ambition.

The trust, selflessness and integrity of ALL public officials is being called into question. That is not ideal or right.

We need openness, honesty, transparency now and a simple ‘continued confidence’ statement is not enough.

I do however acknowledge that you have said something when too many around you in the political arena are remaining silent.

Maybe you could expand on your ‘Vote of Confidence’ a little further helping to give some of your constituents the answers to what appear relatively simple questions. 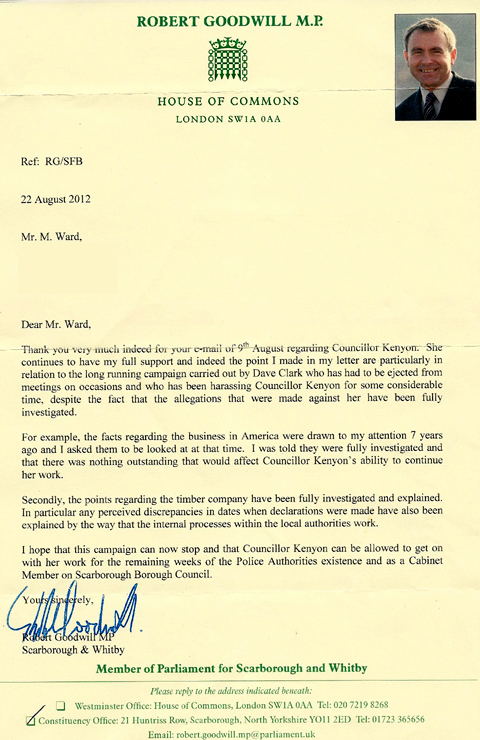