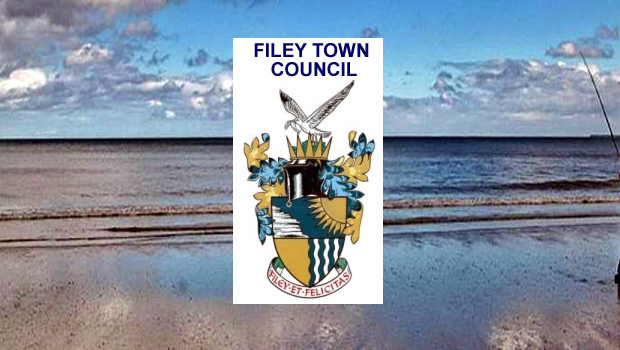 Readers may recall an article of mine entitled “FTC: By-Election Preview”, published on 25th July 2016, ahead of a by-election for a casual vacancy resulting from the resignation of former Filey Town Councillor John CASEY.

That by-election proved to be a very low-key affair with a turn-out of only 8.3% – a figure so poor as to suggest that electors in Filey are largely oblivious to (or uninterested in) the activities of the Town Council. This is rather sad. I have generally found FTC to be amongst the best of Town/Parish Councils in the North Yorkshire area – and I have visited quite a number.

At any rate, eleven out of every twelve Filey electors stayed at home.

In the event (and perhaps in consequence), 238 of the 451 who did vote elected Councillor Mrs Christine RODERICK, at the expense of the only other candidate, Ms Samantha Albertine SLINGER-BEEVERS with 211 votes, who, in my view, was by far the more attractive candidate. (There were two spoiled ballot papers).

A majority of just 27 votes, even on a turn-out of only 8.3%, is a mandate – true. But it is by no means a ringing endorsement. It is eminently reversible.

Be that as it may, on 8th August 2018, newly elected Councillor Christine RODERICK made her maiden appearance as an elected member of Filey Town Council. The webcast of that meeting is not presently available on the Council’s webcast (YouTube channel), for administrative reasons which it is unnecessary to examine just at present.

However, I learn that a video-clip showing an excerpt from the original webcast has apparently been uploaded to the internet here.

In brief: Councillor John HAXBY informed the Council that it had come to his attention that Councillor RODERICK had publicly alleged that he, Councillor HAXBY, had made me aware of the circumstances surrounding the disqualification (in 2004) of Councillor RODERICK as a Councillor for four years by the Standards Board for England in respect of some highly improper financial and governance irregularities perpetrated by Councillor RODERICK during her tenure as Chair of Ravenfield Parish Council.

This is not the case. My knowledge of the affair stems entirely from internet searches which revealed information long in the public domain and provided in my earlier article. I will testify to that if called upon to do so in any defamation action which Councillor HAXBY may be tempted to pursue. Here is another reference that I located:

However, in concluding his robust denial of Councillor RODERICK’s allegations, Councillor HAXBY observed that he had far better things to do with his time than “dig up those sordid details”.

At this point, Councillor RODERICK would appear to have forgotten the Council’s Standing Orders and proceeded to remonstrate directly (not ‘through the Chair’) with Councillor HAXBY, in disregard of Mayor Councillor Richard WALKER’s extraordinarily patient admonitions (as well as Councillor Jeff MEEK’s vain attempt to call a Point of Order), launching into a most unseemly attack which culminated in her objection to Councillor HAXBY’s use of the word “sordid”.

As can be seen from the Google return on “sordid definition”, the word has a veritable host of applications:

It is unclear to me in what way Councillor RODERICK perceives this definition and its associated synonyms to be at odds with the conclusions of the Standards Board for England Review for the Fiscal Year 2005/06, which viewed the “persistent nature” of her conduct, bringing herself and her Council into disrepute, in such a poor light as to deem it worthy of inclusion as a unique example.

If, like me, readers expect higher standards from elected public servants – or, at least, some standards – they may view Councillor HAXBY’s choice of adjective as being entirely apposite and concise, if rather colourful. For me, at any rate, those synonyms beginning with the letter ‘d‘ brook little argument.

Having first abandoned her allegations against Councillor HAXBY, Councillor RODERICK nevertheless insisted on his withdrawal of the word “sordid”, whereupon Councillor HAXBY declined, expressing his view that the word was entirely appropriate.

It has been suggested to me that I may have been remiss, in my earlier article, in failing to reproduce Councillor RODERICK’s election address, which omission I am happy to now rectify: 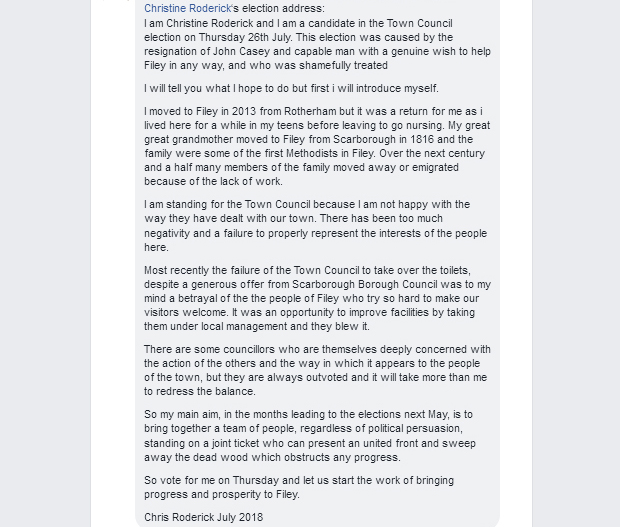 The candidate apparently wished to keep the Rotherham ‘episode’ away from the public eye. Nothing to see here, folks. Keep shopping.

One is left to wonder whether or not Councillor RODERICK’s “work of bringing progress and prosperity to Filey” will resemble the approach she adopted at Riverfield Parish Council – which left that Council in significant debt.

I will leave it, for the moment, at that – at the risk of later being reproached for having failed to roll out the whole story.

Of course, depending on the List of Nominations next March, I may wish to revisit that decision.