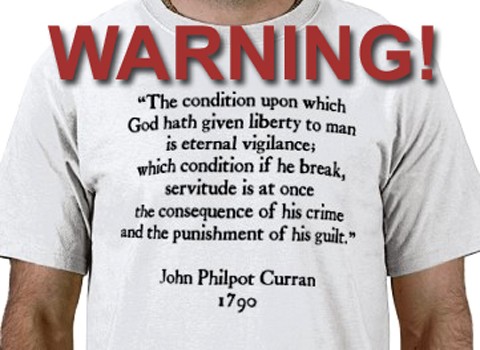 Thomas JEFFERSON, Founding Father and principle author of the US Declaration of Independence, is credited with this dictum:

“The price of democracy is eternal vigilance”.

JEFFERSON is not without his critics, but on the matter of eternal vigilance, few who have observed the behaviour of politicians and bureaucrats would venture to disagree.

Not that there are no honourable politicians or conscientious bureaucrats; far from it. But it is in the nature of hierarchical organisations that it is the clever and the ambitious who attain high office – where they wield great power and influence, constrained by little more than the integrity of their own consciences.

As we know, power corrupts. Not always, perhaps, and not absolutely. But it would take some considerable naïvety to believe that there could never be wrong-doing in the world of local government; which is why there are checks and balances built into the ‘system’.

The ‘system’, in this case, is founded upon the Local Government Act 1972 – forty years, old and much amended over the years, but still a superbly drafted blue-print for equitable local government – and the Representation of the People Act 1983, also much refined by Amendment.

Fundamentally, democracy is about voting.

How is it, then, that the cost of elections has been cited by County, Borough and Town (Parish) Councillors – and by SBC Chief Executive Jim DILLON – as a reason to leave seats vacant or invoke the Co-Option process? Democracy is primarily about voting.

How is it that only 7 of the 19 Whitby Town (Parish) Councillors have contested (and won) their seats at the ballot box? Democracy is about voting, isn’t it?

How is it that the Whitby Town Mayor and his Deputy have not a vote between them, when democracy is about voting?

So we see that the very first of our checks and balances has been measurably diluted.

The right of public and press to attend meetings of Councils and their Committees is also enshrined in law.

Having elected representatives, the public has the right to observe their performance ‘live’, in real-time, both in debate and in the way they vote on specific resolutions. Even amongst the already elected, democracy is about voting.

Public consultation is required by law. This may take the form of quantifiable questionnaires or, more formally, formal referenda. Again, democracy is about voting.

How is it, then, that consultations that produce results contrary to corporate strategy are ignored, re-drafted and brought back time and again until, by a process of attrition, public resistance is whittled away?

How is it that the vast and overwhelming majority of people feel, with a deep conviction, that the disparity between minimum wage and bankers’ bonuses is morally indefensible – but are ignored?

How is it that the vast and overwhelming majority of people feel, with a deep conviction, that militarism and war is morally indefensible – but are ignored? Democracy is about voting, for heaven’s sake!

On a local level, having first elected our representatives – our Parish, Borough and County Councillors – we have recourse to more checks and balances.

Councillors (and only recently, and after much campaigning, Officers) must declare their interests on a Register of Interests. Councillors are not forbidden to hold business interests outside of their Council commitments, but they must make those interests available to public scrutiny. It might be, for example, that a Councillor holds a directorship in a company that regularly supplies goods or services to the Council. That must be declared, because it would be wholly inappropriate for a Councillor to cast a vote in favour of the Council placing an order (large or small) with his own firm.

Any Councillor who denies that knowledge to the public is a cheat, because he (or she) has deprived the public of transparency by concealing a self-interest. Democracy is about accountability.

But accountability is not about blame; it is about acknowledging errors of judgement – because the first step towards a more equitable governance is the eradication of abuse of privilege of position.

Accountability is not about putting self-serving Councillors and Officers behind bars; it is about cutting the cancer of self-interest out of the system.

Council Legal Departments, who handle FOIA requests, are extraordinarily adept at providing the bare minimum of information identified in the form of words of the request. It is no easy task to formulate a request for information in such a way is to ensure a clear response. Answers to complex questions are invariably provided in legal language that is extremely impenetrable to lay people of no legal training. Yet democracy is about transparency, right?

The Rt. Hon. Eric PICKLES, Conservative MP for Brentwood & Ongar, and Secretary of State for Communities & Local Government, had this to say on the subject of accountability and transparency:

“If councillors and council officers are to be held to account, the press and public need access to the information that will enable them to do it. If town halls want to reduce the amount they spend on responding to freedom of information requests they should consider making the information freely available in the first place. The simple act of throwing open the books, rather than waiting for them to be prised apart by the force of an FOI, might even save a few pounds in the process.” – [Eric PICKLES – 2011]

In fact, one can see ‘eternal apathy’ far more in evidence than any vigilance at all. Decades of local politicians bound to national party lines have left the overwhelming majority feeling that Conservative, LibDem and Labour party values (even where the distinctions remain clear) have little relevance at local level. “How to choose?” is swiftly followed by “Why bother at all?” And indeed, the overwhelming majority (60% in the SBC Elections last May did not bother to vote at all, as compared to 16.8% who voted for the winning Tories)

Councillors are elected for four-year terms, renewable at the prerogative of the electorate, but Officers often have a much longer tenure. The Cabinet system adopted by SBC has placed extraordinary power and influence in the hands of a very few Conservative Councillors over a period of many years. As we know, power corrupts. Policies like appointing (rather than electing) the membership of Stakeholders’ Steering Groups, and multiple-choice consultation questionnaires, effectively channel developments in accordance with the policy initiatives of those few familiar faces at the head of the Council.

But as we have seen, the checks and balances are mightily diluted and the votes – the voice of the people – go all too often ignored.

Eric PICKLES considers the case for eternal vigilance well made. Me too.

It is regrettable that so many are content to leave the burden of that vigilance to so few.