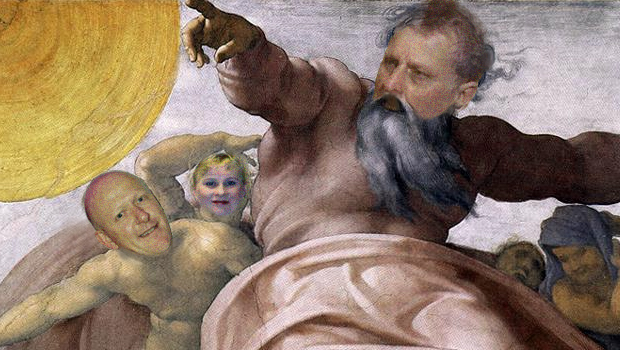 This is the second in a series of articles examining the conduct of Scarborough Borough Council Chief Executive and Head of Paid Service, Mr Jim DILLON and, to a lesser degree, that of Cabinet Portfolio Holder for Legal & Governance, Councillor John NOCK [Con.]. The first article can be reviewed here:

Also related is an earlier article:

Together, these articles make the case for a diligent investigation into the treatment meted out to a Scarborough Borough Councillor whose conduct has been ‘deemed’ to be unacceptable insofar as it allegedly poses a future risk to the health and safety of Councillors and Officers.

I have expressed my opinion that Mr DILLON has exceeded the authority conferred upon him under the terms of his appointment and set out unambiguously in the Council’s Constitution. I have discussed my reasoning with friends in the legal profession and members of several Councils. Without exception, they have concurred with my opinion.

This is unsurprising. Other Complaints (as well as FOIA requests) have been ignored or stone-walled.

More troubling is the fact that questions and Formal Complaints raised by Councillor DONOHUE-MONCRIEFF herself have not only been ignored (and I will examine this in a future article), there is also a strong suspicion (informed and inflamed by some extraordinarily ‘coincidental’ timing), that collusion has taken place between Officers and Conservative Councillors to sweep Councillor DONOHUE-MONCRIEFF’s questions and Formal Complaints under the proverbial carpet.

I offer the following example:

On 27th February 2018, Councillor DONOHUE-MONCRIEFF emailed Councillor John NOCK [Con.], the Portfolio Holder for Legal & Governance, with a formal question to be addressed in Full Council on 2nd May 2018, in accordance with Constitutional requirements.

Having set out in detail the Council’s repeated and determined prevarication in dealing with a Formal Corporate Complaint by a serving Councillor (herself), Councillor DONOHUE-MONCRIEFF then asked Councillor NOCK:

How could he get away with that?

SBC contrived to have Councillor DONOHUE-MONCRIEFF arrested on 1st May 2018 – the day before the Full Council Meeting; ergo, she was not present at the following day’s Meeting.

However, Councillor DONOHUE-MONCRIEFF’s enforced absence did not absolve Councillor NOCK from his Constitutional duty to address her question, which should have been read out to Council and a response, or the promise of a written response, provided (either by himself or by a nominated Councillor) – or a formal refusal to respond. Had he done any of these (which the webcast shows he did not), it should have been minuted – which it was not. The facts of the matter are set out in the public record and are irrefutable. This forms the substance of my Formal Complaint against Councillor NOCK, which Mrs DIXON has thus far ignored .

Returning now to the actions of ‘His Omnipotence’ the Chief Executive in barring Councillor DONOHUE-MONCRIEFF from attending Full Council (or Committee meetings, or communicating with Officers); on 17th June 2018, I emailed a succinct summary of my concerns to a senior Councillor, requesting referral to Councillor Steve SIDDONS [Lab.], who is the Labour Group Leader and Chair of the Overview & Scrutiny Board:

As you have seen, I have published two articles recently addressing the matter of the Chief Executive’s powers (or lack of) to exclude Councillor DONOHUE-MONCRIEFF from Full Council and Committee meetings.

It is my sincere belief, and I have demonstrated my grounds for that belief in the above-linked articles, that the Chief Executive has exceeded his statutory authority – i.e. acted ultra vires.

Certainly, my grounds for forming that conclusion rely on the Council’s own Constitution, on primary legislation, and on advice and guidance published by reputable bodies such as Local Government Lawyer and NALC.

The Monitoring Officer has neither acknowledged nor responded to my Formal Complaints and is therefore derelict in her duty as set out in Council documentation included in my articles.

I do appreciate that requesting you to review all this material bestows a considerable burden. Nevertheless, since I have no means of addressing the Opposition Leader and Chair of the Overview & Scrutiny Board, Councillor Steve SIDDONS [Lab.] directly by secure email, I am now formally requesting that you bring all of this to his urgent attention.

The very idea that a member of Paid Service – be it the Head of Paid Service or my local neighbourhood Street Cleaner – should assume the power to countermand the electoral mandate underwriting a Councillor’s (any Councillor’s) right and duty to attend Council and represent the Ward electorate is an outrageous affront to democracy. It cannot be allowed to stand. Any real or perceived risk associated with the attendance of the Councillor concerned could easily – and lawfully – be mitigated by appropriate and proportionate security measures.

I am sorry to burden you with a perhaps unwelcome task; I see no practical alternative.

I look forward to an acknowledgement from you – and from Councillor SIDDONS.

PS – I have copied this email, in the interests of transparency, to each of those Councillors for whom I hold a private email address. I have done so in Bc: format so as to protect their privacy. I trust you approve.

It has since been confirmed to me that my email was indeed forwarded to Councillor SIDDONS, who has offered neither acknowledgement nor response in the month or so since he received it.

Can it really be the case that I am alone in questioning the Chief Executive’s lawful authority to deny the electors of Hertford Ward (or any other seat) their right to democratic representation? Clearly not – as the above-cited Freedom of Information requests demonstrate.

As I have demonstrated elsewhere, Councillor John NOCK had no authority to refer this question to anyone other than another member:

Of course, the Mayor is “another member” (to whom Councillor NOCK could lawfully have referred the question). However, the Mayor made no attempt to answer the question, instead referring it to the Chief Executive – an action that he had no lawful authority to perform.

The latest exchange between the FOIA requestor and the Council makes compelling reading – not least in virtue of the fact that the Council has now asserted that the Chief Executive was invited by the Mayor to respond to Councillor INMAN’s formal question , under authority conferred upon him by Article 5.1 of the Constitution. 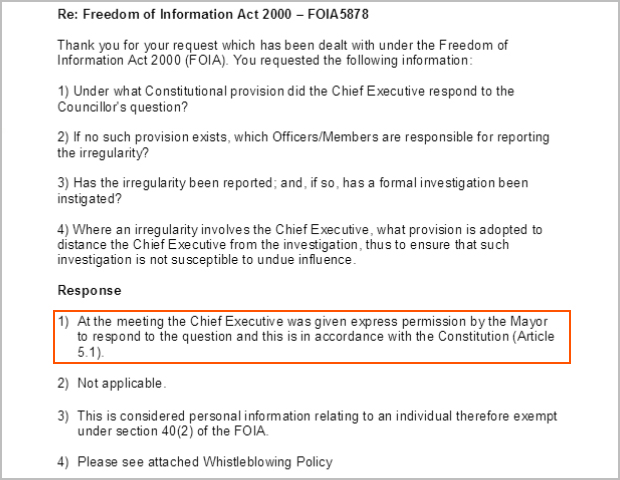 This assertion is, of course, absolutely false. It is a lie. The Constitution makes no provision for the Mayor to redirect a formal question addressed to a Cabinet Portfolio Holder to an Officer for response – Article 5.1 confers no such authority on the Mayor to refer questions to the Chief Executive. The Mayor’s action was NOT “in accordance with the Constitution” at all – and neither was the Chief Executive’s action.

In point of fact, it was the Chief Executive’s specific duty to advise the Mayor that referral to an Officer was not an option. At the risk of squandering a few pixels . . .

*** Mrs DIXON, please acknowledge and record this my second Formal Corporate Complaint against the Chief Executive, Mr James McGarvie DILLON, in respect of his proven departure from the requirements of his terms of appointment, the Chief Officers’ Protocol and the Council’s Constitution. Thank you. ***

Of course, the Chief Executive can hardly plead ignorance of the terms of the Constitution – a pitiful line of defence that would amount to a confession of incompetence and unfitness for purpose.

Returning to the former Mayor: 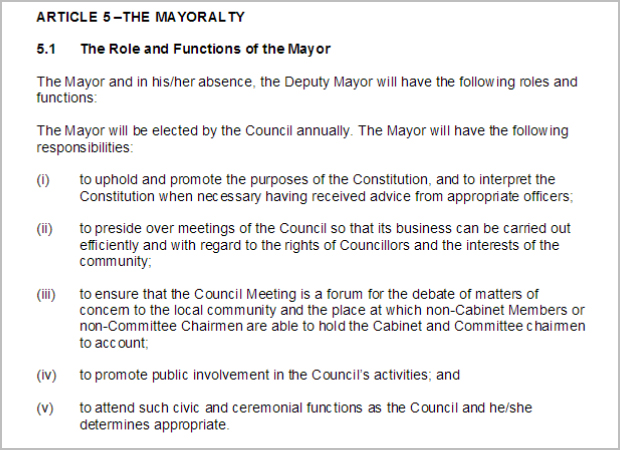 It is ironic in the extreme that the Mayor would appear to have been in simultaneous breach of four out of five of his Constitutional responsibilities, specifically:

(i) Mayor Martin SMITH [Con.] cannot be said to have “upheld and promoted” the Constitution; he ignored it.

(ii) Mayor SMITH cannot be said to have presided over the Meeting with regard to the “rights of Councillors” (in particular, Councillors Vanda INMAN and Michelle DONOHUE-MONCRIEFF) and “in the interests of the community” (certainly not the Hertford community); he disregarded their rights.

(iii) Mayor SMITH cannot be said to have ensured that the Council Meeting was “a forum for the debate of matters of concern”, nor allowed  non-Cabinet Members and non-Committee Chairs to hold the Cabinet and Committee chairmen to account”; he terminated any prospect of debate, committing an unconstitutional act in the process.

(iv) Mayor SMITH cannot be said to have promoted “public involvement in the Council’s activities”; we well remember his despotic dismissal of the public gallery – for having the effrontery to applaud Councillor Rob BARNETT [Lab.] for having reminded Council that he (like they) was elected to serve the people.

With regard to (v); whether or not the Mayor exercised his prerogative to attend (or not) such civic functions as he saw fit, in or out of that ludicrous outfit, is of no moment whatsoever. His entire Mayoralty was an embarrassment and a disaster.

It is not acceptable for a serving Mayor to act beyond his lawful authority – though I think it unlikely that Mrs DIXON will adhere to the Council’s Complaints Procedure. Nevertheless, here goes . . .

*** Mrs DIXON, please acknowledge and record my Formal Complaint of today’s date against former Mayor Councillor Martin SMITH [Con.] in respect of his proven departure from the requirements of the Council’s Constitution. Thank you. ***

Perhaps Councillor Steve SIDDONS, as Leader of the Opposition and Chair of the Overview & Scrutiny Board might like to turn his attention to the (now former) Mayor – who, in accordance with the Council’s practice of rewarding failure, has recently been promoted to the Cabinet, replacing the recently-departed former incumbent – Councillor Joe PLANT [Con.]. Councillor PLANT is the present Mayor. “Out of one sinecure into the next”, as one Councillor said to me recently. “Musical Chairs”, said another. “Giving the bottom of the barrel another stir”, said a third. It is not unreasonable to suggest that when members of the local authority express themselves in such terms, then the Council clearly does now stand in grave disrepute.

I seriously wonder how many of our Councillors and Senior Officers have a working grasp of the Constitution – or can even claim to have read it.

I seriously wonder why our Councillors do not take the trouble to confirm that the information contained in these articles is factually accurate – or, if they do, why they do not take appropriate action. Do they take no exception to being cast as the dog that the wee bent tail is wagging? Are they all practitioners of ‘parapet politics’ – “Keep your head down (and pump up your mileage claims)”?

Fortunately, Scarborough Borough Council is not the apex of the local government pyramid. A little higher up the chain are men and women of compassion, integrity, talent and intelligence who share my concerns. Their wheels may turn slowly, but they do grind exceedingly fine . . .

Within the Looking-Glass world of Scarborough Borough Council, one cannot rule out the possibility that the Chief Executive, at this very moment, is devising his own more-than-handsome retirement package. That would be a small step towards returning the Borough of Scarborough to the real world.

I wonder if he will make himself sign a non-disclosure agreement? 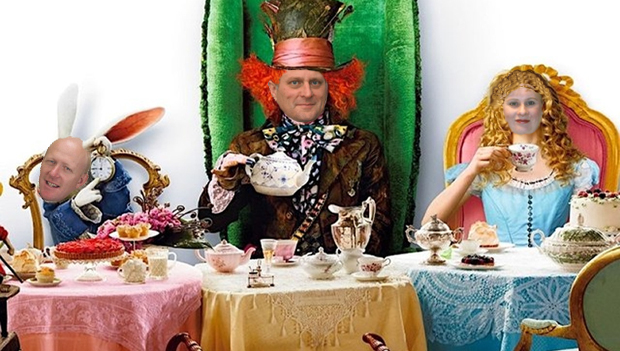