An Open Letter to Mrs Lisa DIXON, Director of Legal Democratic Services and Monitoring Officer, Scarborough Borough Council. This is a long, important, perhaps (for some) boring, but necessarily detailed letter dealing with the propriety of the actions of a Cabinet Portfolio Holder and a Director of the Council, in Full Council. Specifically, the letter examines the regulations binding the Council and highlights a number of serious concerns regarding, in particular, the apparently biased limitation of a Councillor’s electorally mandated authority to represent the electorate at Council Meetings.

I refer you (without ‘vexatious’ intent or ‘unreasonable’ persistence) to the Council’s Constitution, as displayed on the SBC website:

In particular, I refer you to Article 4. RULES OF PROCEDURE, and, more precisely, to Article 4.11. QUESTIONS BY MEMBERS AT ORDINARY MEETINGS OF THE COUNCIL: 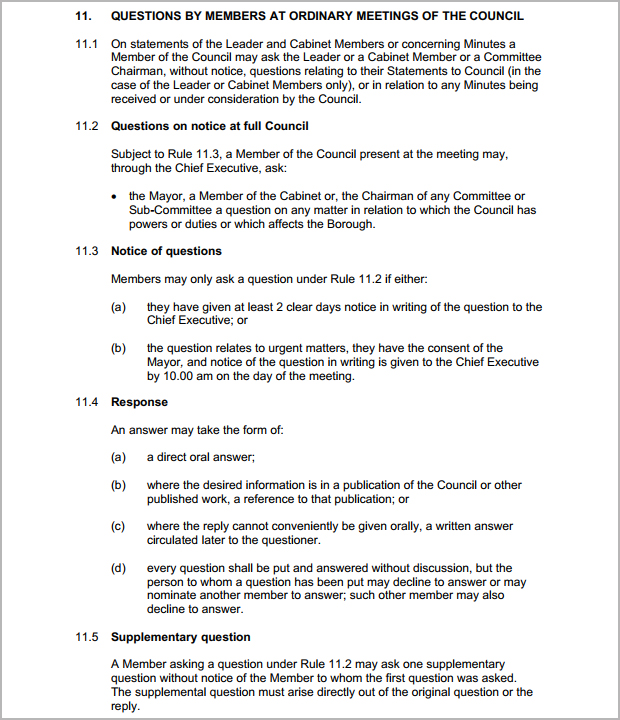 Article 4.11.2 Questions on notice at full Council sets out the proper persons to whom members may address questions (“on any matter in relation to which the Council has powers or duties or which affects the Borough”), who are:

You were present at Full Council on 14th May 2018 when Councillor Vanda INMAN [Lab.>Ind.Ind.] raised the following question, addressing it to Councillor John NOCK [Con.], who is the Cabinet Portfolio Holder for Legal & Governance and therefore a proper person to whom, in accordance with Article 11.2, questions may be addressed.

It is noteworthy that Councillor INMAN did NOT allege that the CEO had exercised powers (or acted without the necessary powers) to “exclude and prevent an elected member of this council from contributing to decision making and attending meetings of this council”, asking merely what legal power was at his disposal for doing so.

It is useful, at this point, to quote the CEO’s remarks:

“I’ll certainly answer the part, the part of it relating to the Councillor you refer to. As is the case with any member of staff, it’s the same with members; we do not discuss confidential matters in this Chamber relating to the wellbeing and the conduct of members of staff, and therefore I cannae comment any further”.

Let it be noted that the CEO’s response was, in fact, totally non-responsive to Councillor Vanda INMAN’s question; it does not provide or cite the authorisation the CEO holds empowering him to “exclude and prevent an elected member of this council from contributing to decision making and attending meetings of this council?

Nevertheless, with the benefit of hindsight, it would be naïve to pretend that Councillor Vanda INMAN was referring to a Member other than the only Member listed as ‘Absent’ on the Attendance Register from the meeting, as distinct from ‘Present’, ‘Apologies’ or ‘Expected’. The connection between the powers (if any) of the CEO to prohibit the attendance of any Member, and the absence (without ‘Apologies’) of a single identifiable Member, is thus made manifest.

It would be equally naïve to pretend that the Council has not been addressing security issues arising from two public order offences reported in the local press.

Thus, knowledge of steps – if any – taken by the Council (either by the body corporate, or by democratically elected Members) in regard to the safety and wellbeing of Members, Officers and members of the public attending Meetings of Full Council, was held by the CEO and is irrefutably a matter of public interest.

I refer you now to Article 4.11.4 Response, which sets out the parameters governing responses to questions raised in accordance with Article 4.11.2, which are confined to:

Councillor NOCK’s response did not conform to these constraints.

In fact, Councillor NOCK passed over all of these options and, instead, referred the matter to the CEO for response, which is (and was) NOT an available option under the terms of the Constitution; indeed, there is no provision for questions addressed to the prescribed proper persons to be referred to any Officer for response under any circumstances  – only to another MEMBER.

Councillor INMAN rightfully and properly addressed an adequately notified public interest question, in a studied form of words, to the appropriate and proper person – the Portfolio Holder for Legal & Governance – and was thwarted in her quest for “clarification” by deliberate (perhaps collusive) evasion. Let us keep that in mind.

Please record a Formal Complaint against Councillor John NOCK for evading his duty and transgressing the terms of the Constitution. Thank you.

Councillor Vanda INMAN is not a member of the Conservative Party; she is, therefore, an Opposition Councillor, and it was in such capacity that she addressed her question to Councillor John NOCK.

It is self-evident that a question raised by an Opposition Councillor and addressed to the appropriate Portfolio Holder of the dominant Conservative party is a political question, raised in a political forum – Full Council.

It is a primary duty of Officers, and most particularly the CEO, to maintain strict political neutrality. By accepting Councillor John NOCK’s referral, when he knew – or should have known – that referral to an Officer was (and is) unconstitutional, the CEO himself acted outside of the Constitution. In doing so, he assisted Conservative Councillor NOCK in his declared desire to evade a lawfully-notifed question from an Opposition Councillor. This is political bias.

I refer you now to the Constitution is respect of Article 5 Codes & Protocols:

You will recall that Councillor NOCK eschewed all of the options available to him under the terms of the Constitution (see above, 4.11.4). In referring Councillor INMAN’s question, which directly addressed the actions of the CEO, to none other than the CEO himself, Councillor NOCK not only evaded providing a proper response to Councillor INMAN – he referred the question to the only person in the Chamber who held a conflict of interests in the matter. The question was about the CEO’s powers and application of those powers. Clearly, the CEO was the very last person to place in such a compromised predicament.

Firstly, Councillor NOCK placed the CEO in an untenable position in a public forum. This is disrespectful.

You will therefore need to append a charge of disrespect to my earlier-stated Formal Complaint against Councillor NOCK. Thank you.

Secondly, 5.3.14 (shown above) requires the CEO to keep Portfolio Holders informed “on matters affecting” them in their respective Portfolios. In the case of the Portfolio Holder for Legal & Governance – Councillor NOCK – the CEO had a clear duty to inform Councillor NOCK of any actions he (the CEO) had taken, or was taking, or intended to take, in respect of the prohibition (or the intended or desired prohibition) of an elected Member from attending Full Council.

Thus, one of three circumstances prevails. A diligent investigation will establish which. Either:

b) Councillor NOCK did NOT know the answer to Councillor INMAN’s question, precisely because the CEO had failed to comply with his duty under 3.14 by omitting to inform Councillor NOCK regarding the actions he (the CEO) had/was or intended to be taking, or the authorisation upon which he (the CEO) could rely to take such actions. The question, remember, was notified in writing in advance of the meeting – from which it follows that, prior to the Meeting, Councillor NOCK had opportunity to question the CEO (thereby obtaining the answer for himself in order to be able to provide same to Councillor INMAN with the appropriate transparency) and, equally, the CEO had opportunity to inform Councillor NOCK regarding the action which he had taken, or was intending taking, and the authority upon which he intended to rely;

Remember that, in the course of the meeting of Full Council on 14th May 2018, Councillor John NOCK specifically referred Councillor Vanda INMAN’s question to the CEO. I remind you of the question;

The CEO did NOT answer this question; he did not state what legal power he could rely upon to “exclude and prevent an elected member of this council from contributing to decision making and attending meetings of this council?”.

This is a clear breach of 5.3.17 such as MUST “constitute a dereliction of duty”.

Officers should conduct themselves with integrity, impartiality and honesty. They should give honest and  impartial advice to the Leader, Cabinet and Members without fear or favour and make available to them all information relevant to a decision. Officers should not deceive or knowingly mislead Members or the public or withhold information that may be relevant to a decision.

Clearly, the CEO’s response did not conform to these requirements.

I draw your attention to Article 11.2(b), which ensures political impartiality in respect of information provided to Members:

The provision of professional advice to all parties in the decision making process.

All parties, let it be noted.

Any information provided by the CEO to Councillor NOCK in regard to the CEO’s putative powers to prohibit Members from attending meetings should, therefore, have been provided to (at the very least) all Group Leaders or (in the absence of Group Leaders) their Deputies. Councillor Steve SIDDONS [Lab.], Group Leader, was unable to attend the Meeting. Councillor Tony RANDERSON, Deputy Labour Group Leader did attend and acted in Councillor SIDDON’s stead. However, Councillor RANDERSON was not provided with an answer to Councillor INMAN’s question. This provides further evidence that the CEO acted partially.

Together with the Monitoring Officer, responsibility for a system of record keeping for all decisions made by or on behalf of the Council.

This Article charges the CEO, together with yourself, with the responsibility to maintain records of ALL decisions.

It follows that any action on the part of the CEO such as would impact upon a Member’s liberty to attend Meetings would entail a recordable decision. Please provide that record. Thank you.

It is noteworthy that I find nothing in Article 2.11.2. Functions of the Head of Paid Service that provides the CEO with the power/authority to prohibit the attendance of an elected Member:

It is noteworthy that I find nothing in Part V General Provisions as to Members and Proceedings of Local Authorities of the Local Government Act 1972 that provides the CEO with the power/authority to prohibit the attendance of an elected Member:

It is noteworthy that I find nothing in Charles ARNOLD-BAKER’s “Local Council Administration” that references the power/authority of the CEO to prohibit the attendance of an elected Member.

Thus, I arrive at the tentative layman’s conclusion that the CEO may have acted ultra vires.

I hereby lodge a Formal Corporate Complaint against the CEO on the grounds set out above.

I conclude by referring you to Article 5 of the Constitution, the Monitoring Officer Protocol, specifically (but not solely) to Article 5.4.A2:

2 The current responsibilities of the Monitoring Officer role rest with the Director (LD), who undertakes to discharge his statutory responsibilities with a positive determination and in a manner that enhances the overall reputation of the Council. In doing so, [s]he will also safeguard, so far as is possible, Members and Officers, whilst acting in their official capacities, from legal difficulties and/or criminal sanctions.

Please be so good as to acknowledge this email, including formal acknowledgement of my Formal Complaint against Councillor John NOCK [Con.] (under the terms of the Councillors’ Code of Conduct, 5.5.1 of the Constitution), and formal acknowledgement of my quite separate Formal Corporate Complaint against Chief Executive Officer and Head of Paid Service, Mr Jim DILLON, as set out above (under the terms of the Officers’ Code of Conduct, 5.5.2 of the Constitution, his contract of employment and whatosever other applicable legislation governing the conduct of a Head of Paid Service). Thank you.