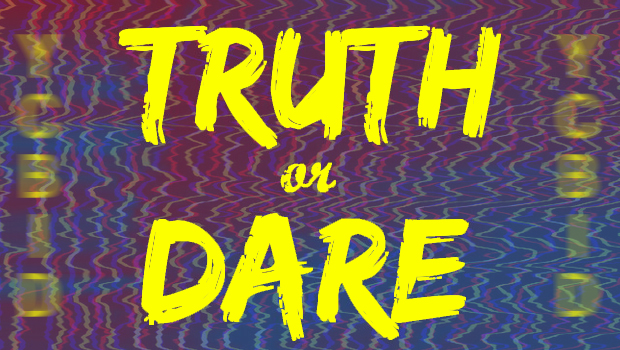 Following my article “FREEZE the BID? Wheels in MOTION” (published on 22nd October 2019), outlining just a few of the many questions surrounding the ballot process which ‘rubber-stamped’ the creation of the YCBID, Councillor Alf ABBOTT [Con.] Proposed a Motion to Full Council, Seconded by Councillor Bill CHATT [CIM]:

I opined, within that article, that the Council’s Director of Legal & Governance (and Monitoring Officer) Mrs Lisa DIXON would possibly attempt to ‘block’ the Motion.

“Yet I fully expect the Council’s Monitoring Officer, Mrs Lisa DIXON, to produce one of her curiously idiosyncratic interpretations of the Constitution to disqualify the Motion (perhaps on telephonic advice from Bevan Brittan LLP?).”

I was subsequently invited to explain myself, which I did in my follow-up article “DBID Crisis – The Way Out”. In brief, my expectations arose on two grounds:

1) I expected that Mrs DIXON would seek to disqualify this Motion on the legal grounds that the Council is statutorily bound (whether or not it so wishes) to collect and/or enforce payment of the levy, under the terms of original 2004 legislation. Further, a comprehensive debate on the Motion will inevitably result in disclosure of the fact that advice to Councillors is likely to have been flawed. Thus, Mrs DIXON may find herself in the position of having no alternative but to admit error – not a position any Council Officer would relish, and which will not arise if the Motion is kept off the Agenda.

2) In my opinion, as a matter of expediency, Mrs DIXON could be viewed as having personal reasons, founded in her own responsibility for the provision of legal advice to members – advice which may transpire to have been woefully inadequate. Further, a comprehensive debate on the Motion will inevitably result in disclosure of the fact that advice to Councillors is likely to have been flawed. Thus, Mrs DIXON may find herself in the position of having no alternative but to admit error – not a position any Council Officer would relish, and which will not arise if the Motion is kept off the Agenda.

A few minutes before close-of-play on Friday 25th October, the date upon which the Agenda for the next meeting of Full Council (on Monday 4th November 2019) MUST be published on the Council web-site (failing which, the meeting MUST necessarily be postponed), the Agenda duly appeared, including, at Item 6(ii):

Readers will observe that Mrs DIXON has successfully diluted the original Motion by excising the condition to suspend collection of the levy pending the result of that “independent and impartial investigation”.

The “independent and impartial investigation” remains, but the “moratorium on collection” has vanished without even a puff of smoke. (How this can satisfy “the interests of prudence and good practice” is difficult to discern).

The bottom line is that irrespective of the many, many concerns surrounding the ballot process, the Director of Legal would like Councillors to accept that the collection process must continue.

In my view, this may be for the sake of appearances – the Council would not wish YCBID to perceive grounds to file a claim that SBC stands in breach of the Agreement between the two parties – signed off, so I understand, by Councillor Guy COULSON [Con.] in his capacity as Chair of the Overview & Scrutiny Board on 31st July 2019 (in order that the first levy invoices could go out on 1st August 2019, in accordance with the Agreement). It may be that Leader Councillor Steve SIDDONS was elsewhere at the time.

Curiously, the Council has already fallen far behind its own timescale – according to which:

. . . none of which has taken place. Provision by SBC of a List of Non-Payers to YCBID (which would potentially breach GDPR) is scheduled for 30th October . . .

Prior to that, at the meeting of Full Council on 1st July 2019, Portfolio Holder for Economy, Communities & Commercial, Councilor Liz COLLING [Lab.] had stated, in her Report to Council:

“Further, the Borough Council was in ongoing dialogue with the DBID company, but as yet no written agreement had been signed between the two organisations”.

Clearly, there was a four week window of opportunity in which the Council (i.e. Mrs DIXON) could have heeded the growing concerns and deferred signature of the Agreement pending resolution, but did not.

I am at a loss to understand why Mrs DIXON did not advise the Council accordingly. It seems remiss to me; concerns had been raised (and disregarded) repeatedly since late autumn 2018. Why the ruch to invoice?

Nevertheless, the Motion is on the Agenda, albeit in diluted form. Many Councillors will read this article – and some of its predecessors – and will discern for themselves that to proceed with collection, enforcement and bailiffs without absolute certainty that all legal requirements have been properly met would be sheer folly. The risks are far from trivial.

A great deal rests on the integrity of the ballot process and the openness and transparency of YCBID’s public-facing representatives.

Perusing some of the documents garnered during my investigations, I came across an exchange of emails that sheds much light on these matters.

The first, from a member of the Yorkshire Coast Levy Payers Association (YCLPA) to Mr Rhys TOMLINSON, aide to the Secretary of State, dated 19th September 2019, reads: 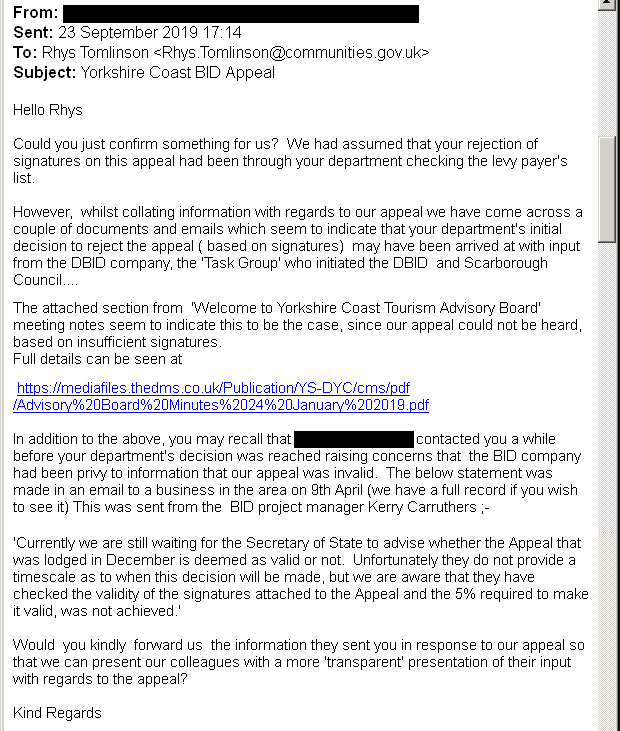 The key passage, citing the (now) Chief Executive Officer of the YCBID, Ms Kerry CARRUTHERS, in an email from 9th April 2019 to a qualifying business proprietor reads:

“Currently we are still waiting for the Secretary of State to advise whether the Appeal that was lodged in December is deemed as valid or not.  Unfortunately they do not provide a timescale as to when this decision will be made, but we are aware that they have checked the validity of the signatures attached to the Appeal and the 5% required to make it valid, was not achieved.“

If the mandatory 5% threshold had not been achieved (and I gather that it has been comfortably surpassed in the new appeal for review), then the appeal had automatically failed.

Yet only on 7th May 2019 – four weeks after the statement cited above – the Scarborough News confirmed that it had now been announced that the appeal to the Secretary of State had not achieved the 5% threshold.

Was Ms CARRUTHERS clairvoyant, or was she wittingly misdirecting the recipient of her email?

We come now to Mr Rhys TOMLINSON’s response to the YCLPA email of 19th September 2019: 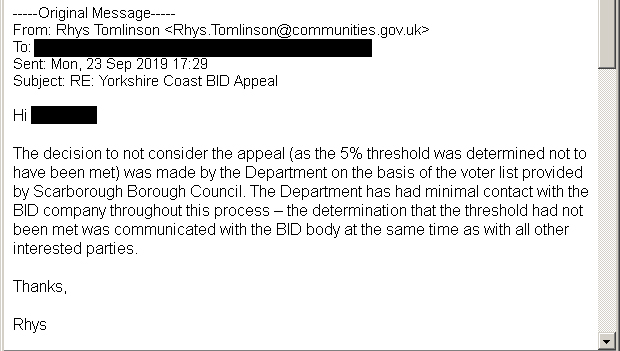 “the determination that the threshold had not been met was communicated with the BID body at the same time as with all other interested parties.”

In my opinion, when an aide to a Secretary of State sets down, on the Minister’s behalf, in writing, that the YCDBID was informed of the disqualification of the appeal “at the same time as with all other interested parties” – i.e. on 7th May 2019 – one might venture to say that it is reasonable to take him at his word.

But where does that leave Ms CARRUTHERS, who informed a business proprietor one month earlier on 9th April 2019 that “we are aware that they have checked the validity of the signatures attached to the Appeal and the 5% required to make it valid, was not achieved.”

Was Ms CARRUTHERS being clairvoyant – or disingenuous?

As stated above, a great deal rests on the integrity of the ballot process and the openness and transparency of YCBID’s public-facing representatives.

As previously reported, YCBID Chair Mr Clive ROWE-EVANS and his CEO, Ms Kerry CARRUTHERS will face Councillors just 90 minutes before Full Council. One cannot envy them. Will they dare to attend?

I trust our elected members will be mindful of the pitfalls of taking too much on trust.