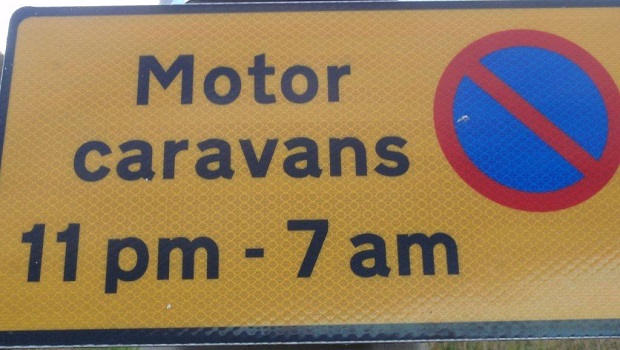 For the ban to be permanent, there would need to be a change in Traffic Regulation Order (TRO) ‘Borough of Scarborough (Off Street Parking Places) Order 2012‘. The council would need to consult with special interest groups such as the Emergency Services, the Road Hauliers Association, Public Transport providers and North Yorkshire County Council (the Highways Authority in North Yorkshire), as per statute, before making the order.

The notice was reproduced in all council owned off-street car parks, the Scarborough Evening News, the Whitby Gazette and on the Council’s website. For some reason, SBC never consulted with the largest special interest group, the readers of ‘Motorcaravan Motorhome Monthly‘, which has a circulation figure in excess of 37,000.

On the 4th July 2012 the Yorkshire Coast and Moors County Area Committee of North Yorkshire County Council met and approved the SBC-sponsored motorhomes ban. All but one of the councillors declared they are also elected to SBC too.

One of the NYCC councillors who approved the motorhome ban is former Borough Mayor, Andrew Backhouse. In his Register of Interests Backhouse declares that he is a ‘Caravan Park Manager’ in Burniston, Scarborough. Perhaps it would have been wiser to declare his interest and not participate in the vote.

On the 16th October 2012 a Cabinet meeting was held at Scarborough Town Hall and fifteen objections to their notice were discussed. The signage banning motorhomes was already in place prior to the meeting. Council officers felt the objections should be ignored because motorhomes should use caravan sites.

“There are many other options available for overnight stays with availability on existing large sites as well as the significant number of certificated sites within the Borough.”

“Off Street Car Parks are considered private land, therefore can be controlled as The Council see fit.”

It is interesting to note the reason for banning motorhomes.

“A number of car parks have been identified where problems are known to exist.”

One of the car parks, King Street, is located next door to the Town Hall. It has a rather scenic view too. Car owners who may have needed to visit the Town Hall during business hours will have noticed the difficulty in parking at King Street.

During business hours, King Street car park is full of vehicles owned by officers of SBC, displaying their SBC parking permits which mean they park for free, whilst members of the public barely get a look in during the working day.

One wonders if any members of the council’s Parking Review Group, which is comprised of officers and members of SBC, were ever forced to look for another parking space a few hundred yards away in St Thomas Street due to the number of motorhomes that were parked overnight in King Street.

It seems the collective wisdom of all in the Parking Review Group, which was likely peer reviewed by the legal department, never thought they would actually need to consult with all affected by their proposal, so they avoided placing an advertisement in publications such as ‘Motorcaravan Motorhome Monthly‘.

It had been pointed out to SBC that the process they had followed to implement the permanent order was incorrect. As with most genuine complaints submitted to the council that pointed out their failings, they were stonewalled and ignored. Another case of council maladministration!

Interestingly, the illegality of the process has recently been confirmed by North Yorkshire County Council, the Highway Authority for North Yorkshire, which is responsible for on-street parking spaces such as the Royal Albert Drive. The officer indicated that process of consultation will start again as the job was never done properly in the first place. This time an advertisement will be placed in ‘Motorcaravan Motorhome Monthly‘ to ensure that those affected are given the opportunity to comment on the matter.

I refer to the complaint made by you and the National Motorhome Organisation (NMO) on 9 July 2014 regarding your alleged failure by NYCC to produce a definitive statement of reasons to accompany the consultation for the proposed Traffic Regulation Order to prevent Motor Caravans from parking overnight. Your view was that this had prevented the NMO and yourself personally from submitting a response as part of the consultation process and thereby denying both yourself and the NMO a legal right to respond to the issues consulted upon.

Having reviewed the consultation process to date, the County Council have taken the decision to re-consult on the proposed Order, which will involve taking the following steps:-

The County Council will notify you when the consultation commences. I hope that this will serve to address both of the issues you raise and also update you on the current position with regard to the proposed Order.

The current temporary restrictions will remain in force, pending the determination of the proposed Permanent Order.

If Scarborough Borough Council hadn’t taken their anti-motorhome stance, then perhaps the Tour De France organisers would have brought their 113 year old cycle race to the coastal region of North Yorkshire.