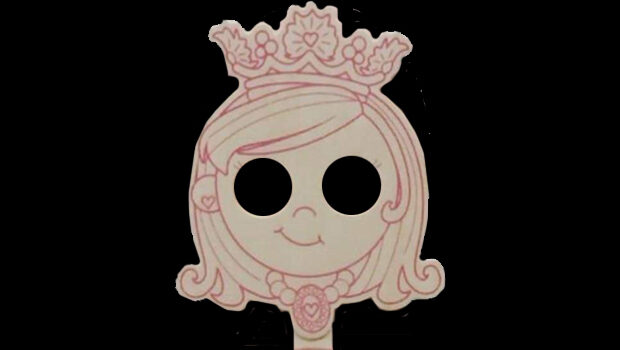 Before reproducing (for convenience of reference) a scan of Mr CORRIGAN’s comments, I would remind readers of some of the ‘heavy hitters’ who have already registered Formal Objections to the proposal. These include:

Collectively, these experts in Planning have logged many decades of professional service. They know whereof the speak.

It is also worth examining the formal Objection lodged by SBC’s own Tim CROOT, Environmental Health Officer, which is so exhaustive in its damning criticism of the project, on various grounds, that it is hard to see how members of the Planning & Development Committee will plausibly be able to disregard it without looking questionable:

Earlier in the year, Scarborough & Whitby MP, Robert GOODWILL [Con.] (who has been more engaged since the pandemic – perhaps on the suggestion that there could be a General Election early in the New Year) told Planet Radio:

“Some of the Council’s scheme are quite controversial. The Argos site for example, the re-development of that provides student accommodation and health worker accommodation has been quite contentious particularly following the way that the Travelodge deal has gone very sour and the Council hasn’t seen the income, partly due to Covid-19. It’s a long way from the hospital. If I was an NHS worker working unsocial hours, knocking off shifts at 2am, would I want to live in the centre of town and then be faced with ‘how do I get back to my flat? How do I get to work? Particularly when there’s no provision for parking cars.

I’ve seen concerns about the design of the building. I’ve seen concerns about the long term viability. There have been concerns expressed to me that if those flats are used to house people who are difficult to house, then it may deter other people from going to live there. There are a number of people I’ve talked to in the town, particularly in the business community, who are concerned that the Council are maybe getting over their head a bit in terms of some of these investments.

I’m not sure the Council itself should necessarily be involved in this sort of investment and certainly, looking back at the Travelodge investment, the Travelodge would have been there anyway even if the Council hadn’t decided to buy it. There are plenty of good opportunities in town for private investments.“

That is a concise and commonsensical summary and one I would challenge any truly Independent member to gainsay.

Conspicuous by their absence from this imposing list of Objectors are SBC’s three Castle Ward elected members (left-to-right), all duty-bound to represent the interests of Castle Ward residents:

It is easy to imagine that the first two – Councillors BAILEY and MAW – are fettered by their party political allegiance to SBC Leader Steve SIDDONS [Lab.], whose position is now so precarious that he cannot conceivably permit his foot-soldiers to deviate from the ‘party line’, even if that were to require the Labour Castle Ward members to betray the best interests of their own electors (whose importance is negligible, except in the run-up to elections).

Councillor JEFFERSON, on the other hand, is (nominally, at least) an Independent (in fact, Leader of the Independent Group), and therefore not directly part of the Labour Group. Her loyalty to the Leader (in preference to her electors) may be explained by her membership of SIDDONS’ Cabinet – a position which doubles her Allowances and ensures her place in the Lab./Ind. Alliance. Councillor JEFFERSON is the Portfolio Holder for Corporate Resources

I, for one, have never understood how borrowing £22 million (now estimated to be likely to approach £30 million) over forty years, to erect a building worth (when completed) £7.6 million, backed by a 10-year tenancy arrangement, could ever represent prudent management of Corporate Resources. I would be grateful to hear Councillor JEFFERSON’s rationale.

Of course, the SIDDONS/JEFFERSON Alliance will be a footnote to history before that 10-year tenancy deal expires – never mind the 40-year loan. And the new North Yorkshire Unitary Authority will inherit the residual liability which, inevitably, will burden ratepayers well into the second half of the 21st century.

And I would venture to suggest that, had these three Councillors engaged with Castle Ward residents, they would soon have encountered the strength of feeling running through the Bottom End like the word ‘OBJECTION’ through a stick of Scarborough rock.

Significantly, Councillor Janet JEFFERSON [Ind.] wears a second hat in this matter. She owns and operates a business within a very short distance of the proposed ARGOS ‘regeneration’. That may (or may not) be a disclosable interest. But Scarborians will all remember how fiercely Councillor JEFFERSON resisted the demolition of The Futurist Theatre, in vocal and strenuous support of residents’ views. Of course, Councillor JEFFERSON was in opposition then, in no way in thrall to the Leadership . . .

Moreover, Councillor JEFFERSON wears a third hat; she is also the Chair of the Castle Ward Tenants’ & Residents’ Association (CWTRA) and is the (albeit unnamed) target of Mr CORRIGAN’s ‘appeal’.

Mr CORRIGAN, in his SN letter, expresses his concern that the CWTRA has not met since December 2020. Thus, tenants and residents appear to have been denied an opportunity to express their opinions in open forum. 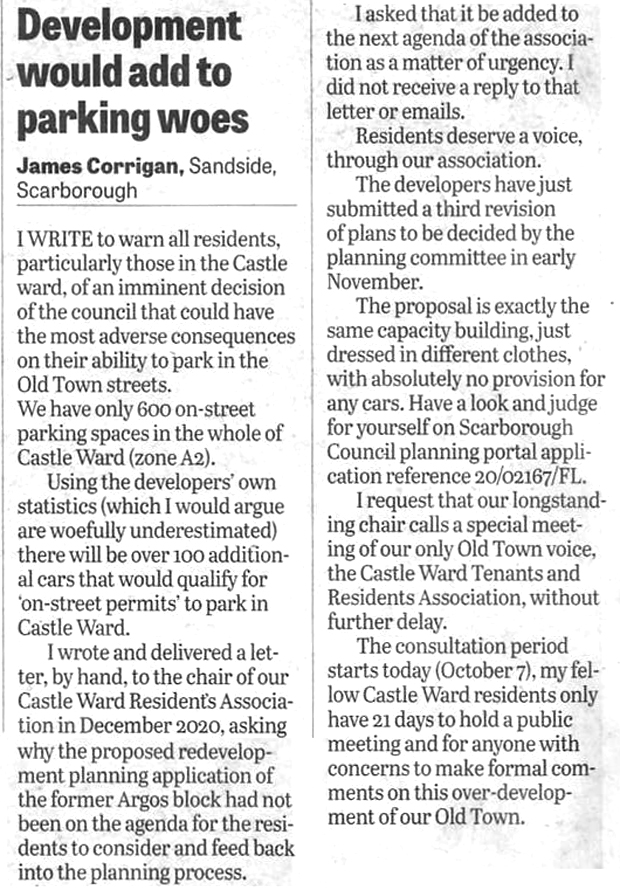 I would be astonished if Castle Ward Councillors were to call a public meeting.

Far more likely it is that Castle Ward business proprietors take the matter into their own hands and call a public meeting of their own. I hope they do. I would be keen to attend. It would be encouraging if Castle Ward Councillors would also do so. Maybe SBC CEO Mike GREENE. Maybe even SBC Commercial Director Mr Richard BRADLEY . . .

And now for ANOTHER Prize Cock-Up

Following the ‘procedural impropriety’ of publishing an erroneous Committee date on the Planning Portal in respect of the ‘regeneration’ of the former ARGOS building (as I reported in the Enquirer on 3rd Oct. 2021), exactly the same mistake has been made with the publication of the separate Planning Application for the Town/Market Square at St Helen’s Square. 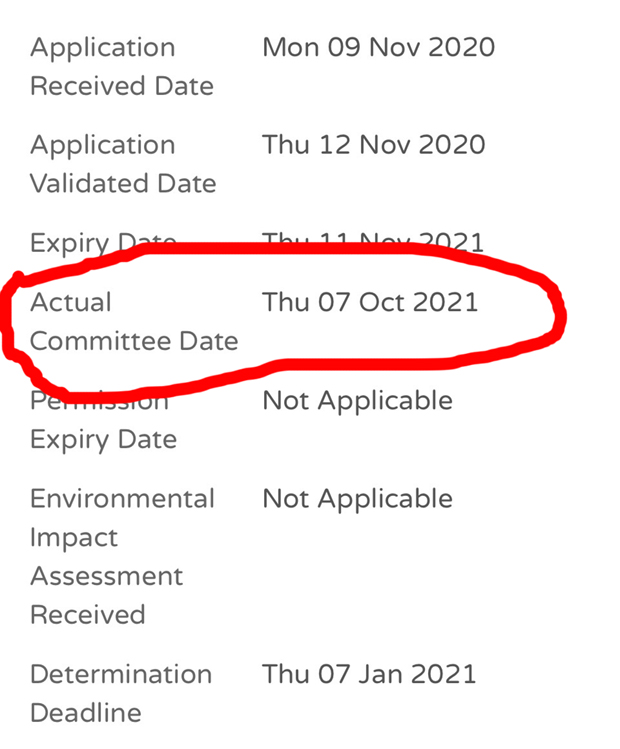 Once again, the date is erroneous – the Planning & Development Committee did meet on Thursday 7th October – but the above Application was not on the Agenda.

Once again, the process will have to be revisited. Once again, start and finish dates for a Public Consultation remain uncertain.

Perhaps these ‘procedural improprieties’ are a predictable consequence of clerical staff ‘working from home’, a procedure characterised by catastrophic breakdowns in communications. One would hope that sabotage can be ruled out!

I do know that the opinion is circulating that this project, if ‘successful’, will gravitate towards a similar outcome to a failing student-housing project in Glasgow – not just a typical Council white elephant, but a festering doss-house.

Indeed, former Head of Planning, Mr Jonathan ALLISON, decribes it (in his formal Objection) as a future “slum tenement”. 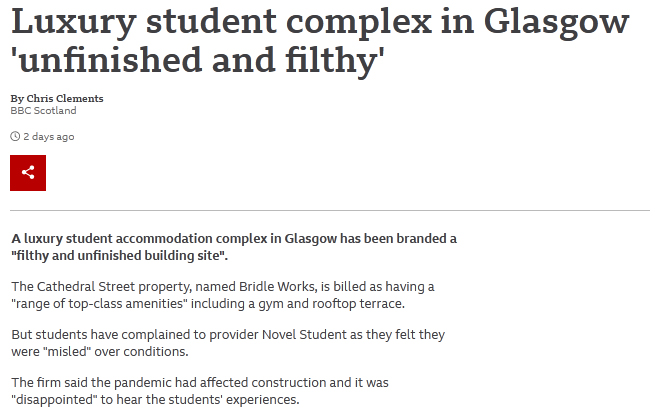 “The pandemic had affected construction…”.

Nonetheless, this is what the SIDDONS administration insists on calling the ‘regeneration’ of Castle Ward. I would contend that that is correct – all barring the initial letter.

I call it the ‘Degeneration’ of Castle Ward.

I look forward to seeing the formal Planning Recommendation of SBC Chief Planning Officer, Marcus WHITMORE. How on earth can he disregard the many well-articulated Objections?