Beleaguered tourism-related businesses along the Yorkshire coast will be encouraged to learn that the Audit Committee of Scarborough Council has at last been summoned to consider the Peter STANYON Report into the shambolic execution of the ballot process (ab)used to authorise the incorporation of Yorkshire Coast BID Ltd, whose purported raison d’être (to increase footfall) has been rendered more or less redundant by the Lockdown response to the COVID-19 pandemic.

The meeting is scheduled to take place behind closed lens caps – i.e. via ZOOM.

Never let it be said that the Scarborough Borough Council Leader, Councillor Steve SIDDONS [Lab.], is a man to ignore an appeal from a well-meaning member of the public. 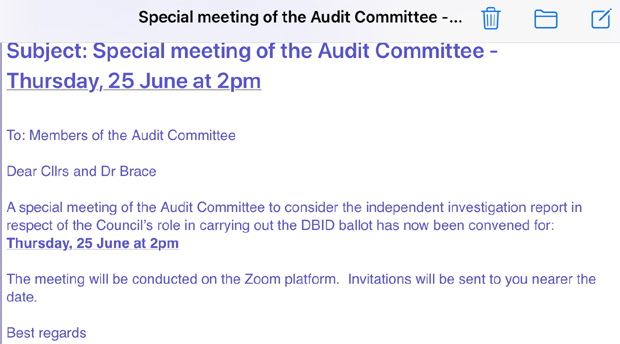 Readers may wish to revisit the STANYON Report (as reproduced in the original Agenda for the Audit Committee meeting of 19th March 2010 (abandoned), as well as a formal letter to the Council from Mr Gareth PINWELL (solicitor representing the Yorkshire Coast Levy Payers Association), both of which identify numerous shortcomings in the administration of the ballot.

Word from within the Executive Board of YCBID Ltd suggests that the company’s present plans, going forward, include a series of nautically-themed statues and a ‘loop’ in the much-vaunted Yorkshire coast highway re-branding, presumably so motorists heading for our coastal resorts can change their minds without actually stopping at all. One Executive Director – Mr James HODGSON – has reportedly threatened to resign if this ‘loop’ is dropped from the BID’s masterplan. Diddums.