(Questions to the Audit Committee)

Borough Councillors of every political persuasion, past and present, have been complaining of the appalling lack of openness and transparency in the manner in which the present Labour/Independent coalition is administering public affairs on behalf of its residents. In my view, it is a matter of the greatest public interest that actions leading up to the deliberations of the Audit Committee in respect of the Election Services Team’s fatally flawed ballot process should be aired in the public domain.

Below, readers will find some of the Questions sent in by various interested parties. Not all have received acknowledgement. Together, they paint a detailed picture of why public trust in the ballot process, and in the BID company, has evaporated to the extent that over three hundred businesses are adamantly refusing to pay the levy.

Answers to these Questions, if any are forthcoming, should be accessible to all – irrespective of whether the Committee sits in the Council Chamber under full view of the Public Gallery and the press, or in front of webcams and microphones for a ZOOM session, possibly available on the Scarborough Borough Council Youtube Channel, here (but one nevers knows).

By this time tomorrow, it should be clear to all whether or not some last shred of fairness, decency or integrity exists at Scarborough Borough Council. Cometh the moment, Councillor BACKHOUSE . . .

QUESTIONS – Granted that the SBC Elections Team acted in good faith in the matter of the ballot underpinning the incorporation of Yorkshire Coast BID Ltd, and without seeking to apportion blame, would members of the Audit Committee agree, given the innumerable shortcomings of the ballot process, as highlighted by (i) the Yorkshire Coast Levy Payers’ Association consultation/survey, (ii) Mr Peter STANYON (Chief Executive of the Association of Electoral Administrators) in his Report, (iii) solicitor Mr Gareth PINWELL (of ASHFORDS LLP) in his letter to the Council of 16th March 2020, and (iv) my good self, that there now remain only two honourable options, going forward, that can satisfy the requirements of fairness and good practice; namely:

1) conduct a fresh ballot which complies in every detail with the statutory requirements; or

2) terminate the BID arrangements, either under s.18, as set out below, or by whatsoever other means:

18.—(1) The relevant billing authority may terminate BID arrangements where—

(a) in the opinion of the authority, the BID body will have insufficient finances to meet its liabilities for the current chargeable period and the authority has—

(i) offered the BID body a reasonable opportunity to arrange for financing the shortfall or for a reduction in the works or services under the BID arrangements which is sufficient to offset the shortfall; and

(ii) given those persons who are liable to the BID levy an opportunity, at a public meeting, to make representations in relation to the termination of the BID arrangements; or

(i) where there is a BID body, consulted the BID body and conducted a consultation with such representatives of the business community for the geographical area of the BID as the authority considers appropriate; and

(ii) where a local authority BID body is responsible for implementing the BID arrangements, conducted a consultationwith such representatives of the business community for the geographical area of the BID as the authority considers
appropriate.

I thank you for your consideration in this matter and rely on you to make a special point of reminding members of their obligations in respect of the declaration of disclosable interests.

[This Question was submitted by me, by email, at 11:19am on 6th June 2020. It was opened by SBC Democratic Services Manager Mr StJohn HARRIS on 8th June 2020 at 07:45am. Mr HARRIS has neither acknowledged nor  responded to my email. My rights as an elector of the Borough of Scarborough have been breached and abused.]

Businesses have closed that will never re-open, businesses that will open will have lost fortunes and will take years to recover. How will councils pursue those payments for the next 4 years if this BID is allowed to continue?

The BID company has issued statements saying there is no legal mechanism they can employ to assist businesses. The very businesses they claim to be  supporting.

The independent investigation refers, at paragraph 6.5, to the Council’s ability to terminate the BID arrangements, which apply  in circumstances ‘where it considers that the BID body will have insufficient finances to meet its liabilities, or the authority is unable… to provide works or services which are necessary for the BID to continue’.

Our solicitor’s letters both give a very clear road map via Sections 17 and 18 of the BID regulations  that will relieve that legal pressure and financial burden on both businesses and Councils and hopefully restore some trust.

I run 2 businesses in Whitby and I  would like to register my opposition to the Y.C.B. levy. While you are considering this report, I would like to remind you that the report was instigated by Full Council and I think it’s only democratic that this is put to Full Council for debate and decisions, so that all elected representatives are given the chance to have input and represent their constituents. 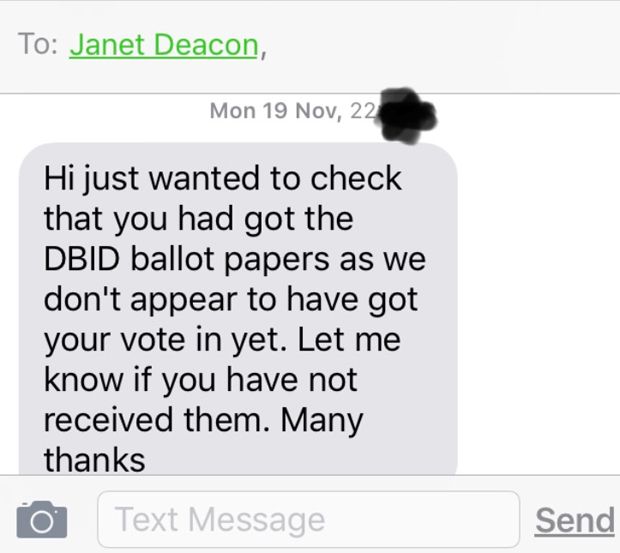 Question to Mr Peter STANYON, CEO of the Association of Electoral Administrators

Without going into finer details, you have highlighted a number of significant concerns about this process such as:

You conclude by adding that, in your view, ‘communication between the BID proposer and the businesses has been lacking throughout.

Putting the ‘Terms of Reference’ imposed on yourself to one side, and using your ‘own words’ as ‘being on the side of democracy’ –

Has democracy in the true spirit of the word been upheld here?